This one crept up entirely unsuspected that I was gob-smacked in the last week or so since I came face to face with the discovery. Know, in this post and elsewhere, I want to point out the changes in my taste/opinion; I'm not saying something is right/good and others are wrong/bad.

At dinner two Sundays ago, I was "asked" by someone who really knows her stuff if I like a weaver's work. I say "asked" because as near as I can remember, it was something like, "Don't you just love her work? She is such an excellent weaver and her colors are beautiful. Don't you love her pieces?" I couldn't say no because I love the person who asked me, so I commented on the weaver's equipment.

I was never a fan of her colors, but I admired her techniques, productivity and enthusiasm greatly. I spent years wanting to weave the sort of stuff she wove, (not exactly the same aesthetics, but you get the gist,) and studied her work closely whenever I could. She owns the biggest, mostest and meanest weaving machines, and travels around the world attending workshops and conferences. In spite of all that, this year at the National Exhibition, I found her work clinical, impersonal and vacant. Technically they were great as usual, colors, like I said, never did me much, but I was so taken aback because I went entirely ready to be awed. To be floored.

I can't explain why they appeared so vacant to me. The issue could be, I could well imagine the weaver combating the mathematical possibilities of a design and concluding this, or that, or both, design is weavable. (My conjecture, you understand.) Another explanation was, I couldn't see a living human wearing it, whereas with most woven works, whether I like them or not, I can easily construct a visual picture of a living human being adorned in the cloths.  I always picture different kind of people wearing my stuff in different places/occasions as I design and weave and finish the stuff, unless it's a commission and I know the person who will wear/use it. I mean, vivid and concrete pictures even of people I don't know or never seen/met in places I've never been to or know. Do you?

The funny thing is, I always thought I wanted to weave technically well-constructed, impersonal cloths, impersonal being a rather important thing for me. I aspired to weave like a machine. But last month, when faced with this weaver's work, I didn't like what I saw. And in spite of some technical glitches, I much preferred pieces with a more personal feel, ones where I could imagine humans wearing and breathing in them. You understand this was my reaction, and I should ask other weavers/visitors what they thought, because they might have felt the weaver's feelings, intentions, whatever-else come through, and that's wonderful. So it's official; I now like cloths where I feel something of the maker is included in it. But how do I feel about what I make? What kind of cloth do I want to make? Well, the jury is out on fishing this weekend.

I can't decide if this is related, but I'm approaching the end of Carla Sonheim's Faces 101; I'm taking all the time in the world and doing extras where I feel like it. Carla's courses give me a bit of Stockholm Syndrome, and I started looking at what I might consider doing next, and the one I'm most interested in this week is one of the two I felt "not in a million years" only half a year ago when I discovered her courses: Junk Mail Artist's Book! I am ever so keen on it, though perhaps not right now. I have to keep my eye on the.. now what did Lynne tell me... brass ring, that is the October exhibition, and my Sketchbook Project 2013 sketchbook arrived at long last.

EDIT: said weaver told me some years ago s/he prefers "weaver" over "artist" and "workshop" over "studio" so s/he knows what s/he's doing. Again, I stress, it's about my changing taste.

This is related, I'm pretty sure, but don't know how. Again, I stress these are my opinions and changing tastes/view points, not about right/good/wrong/bad.

There is another weaving exhibition at the Refinery, by a group called Professional Weavers Network. (Goodness, on a bad year Changing Threads is the only textile exhibition, but between October 2011 and 2012 there are four that I know of!) Dianne has shared her experiences at their do this year here, but to me, PWN reminds me of Yakuza; I know they're there, I even know some who belong, but I don't know much about what they do until they strike out in public, like an exhibition in Nelson or Blenheim.

Anyhoo, I took some shots with permission from Refinery; I also have permission to post here. The theme is "Flight". 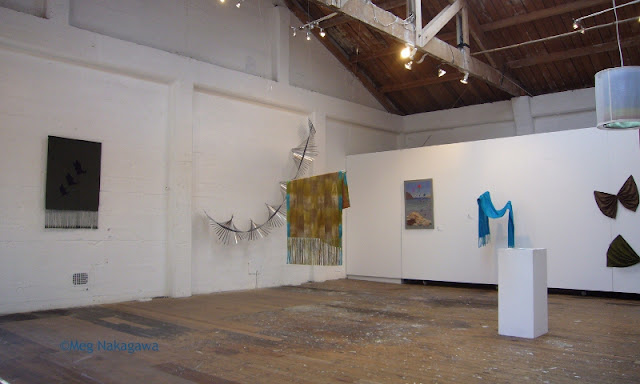 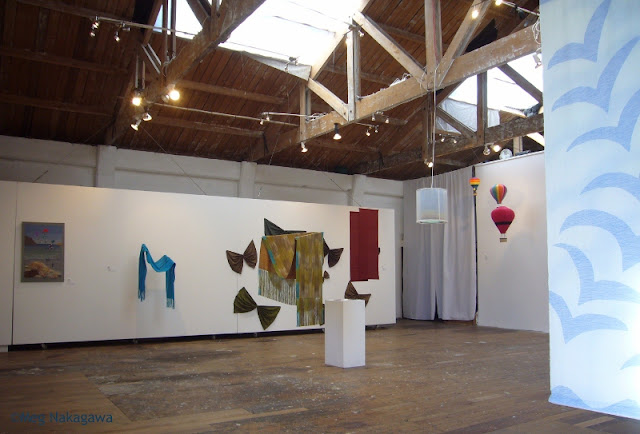 I don't know how they work, and I believe they position their exhibition as a "weaving" exhibition rather than (textile) "art", so you know this. What I saw were either pictorial portrayal of things that fly, either in 2D or 3D, or work with nothing to do with flight per se but in the name/color or other gimmicks to force association. One exception was the metal piece in the top picture, which exudes flight to me, but puzzled Roger who asked what it had to do with weaving. (As you might have guessed, the metal pieces are woven as wefts and about an inch at the center is weaving as we/he know/s it.) Many pieces were exquisitely crafted; some, the weaving was good but the assembly/setup was disappointing, and one should never call something an installation if it is not site-specific; it's a decoration or objet d'art if it wasn't constructed for this exhibition in this gallery in the first instance.  (See, I'm learning.)

As an exhibition, this to me looked sad; too few pieces in a big gallery, and to use the two of three partitions to make the room smaller. The use of space made me think of a school exhibition in a gymnasium. One piece at the entrance, just above your head of the entry way, was too easily missed; I saw it for the first on the third time I exited the gallery. Roger was happy with the exhibition, but surely, surely, there would have been ways to bring together works with disparate interpretations of the subject/title. The saddest part for me was unless you were already interested in textiles, weaving, and/or techniques, the overall feel of the exhibition didn't exude joy or pleasure, which I associate with flight, nor did it provoke closer scrutiny of individual pieces. And many were worthy of it.

I don't know the circumstances around the installation or who hung it, but I'm not bitching and denigrating someone else's exhibition. I keep pondering what I would have done if I was responsible, four points come to mind:

1) I would have used the partitions to create areas so the middle of the exhibition isn't left so empty;

2) I would have not hung everything that's meant to be hung on the wall, on the wall, but off-set some to create breathing space and if the visitor so desired, could see the back of the work;

3) I would not have concentrated so many works near the entrance. (Sorry, not photographed.) So something is small, you can create drama hanging one small piece in a big area, rather than cluster smallish things together;

And finally 4) pay attention to hight when hanging from above.  This is a difficult one for me and I have to see to know if something looks right. I like exhibitions that take advantage of the height of the venue on the one hand, but if a piece is too high and hard to see, as at least two were too high for Ben and he didn't notice the one at the entrance, those work are lost to the exhibition.

And for goodness sakes, if light is an important component of a work and you could be bothered to put a light inside it, let's put the work in a dark area so the intended illumination shows up, eh. People were puzzled about this one, I can tell you.

But these are just thoughts that came to me in the last couple of days, and even I can never know unless I install and see for myself.  I'll most likely revisit this exhibition before it closes in two weeks; then it's going to Wellington if you are interested.
Posted by Meg at 5/19/2012 09:58:00 PM