Group R, which is set to change its name, met this Monday. I'm glad I stuck around because after three horrible (for me) meetings, I had a productive, meaningful one. Not sure what others thought, but I hope they were glad. Pat and Jo are moving in unexpected directions, Ronnie keeps coming up with new ones, and Maria, oh, Maria was sewing a mock up as we spoke, after being unsure of one she did a few days ago. I love watching people work. I haven't changed my plans per se, but I had a breakthrough, a cleansing and letting-go experience, because of our conversation and the company. So much so that though not directly related, on Tuesday morning I played with diluted gesso, store-bought stencils and cereal boxes. 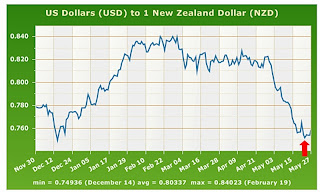 The gesso et al. is due to signing up to Carla Sonheim's Junk Mail Artist Book online course. (The one course she offers I never thought I'd ever sign up for even if it was free!) On the day NZ$ was behaving badly. (It's come back up some more since.) But never mind, I find Carla's videos and instructions soothing and encouraging.

When I was still in Japan, Group R discussed Keri Smith's books/methods of pushing oneself to go beyond one's preconceived boundaries. I love the concept but I still cringe at some of the more "violent" suggestions. I'm conservative like that; I can't deface a perfectly good map, (especially if it's an old one,) or destroy a good book to create something else. But Carla's nudges I can take, even if sometimes I have to view/read, think, contemplate, take a walk, have a nap, and decide to trust Carla not to lead me astray. It helps that many of her suggestions are the same as/similar to what we did in Ronette's drawing course. 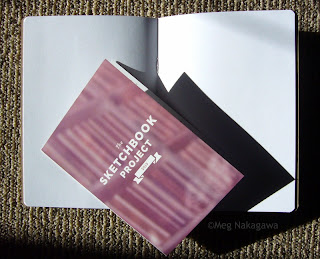 I got the 2013 Sketchbook Project sketchbook in the mail. It's new and improved: the pages are slightly fatter/squarer, there is no perforation line on the left side, and the cover is an ordinary brown cardboard. I can't remember how the 2011 one was bound, but I don't think it was with just two staples; they assume many participants want to reconstruct/reconstruct and this will be super easy. Overall, it feels more naked and in need of a lot more TLC. I haven't done anything with it, and I hope magic markers won't bleed, but everything looks good. 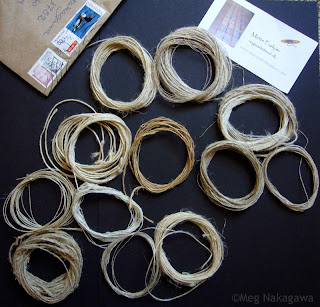 Last night I got a whole lotta linen from Mette, and I now have a plan for my "Friendship" piece; I haven't worked our anything specific/practical, but I like my idea. Hummm.... What am I saying? I love my idea.

I took off the navy blue cashmere warp from the last post; I'm not putting it on the warping board one end at a time. I think I did more damage to it rewinding, so I'm going to put it back in a chain, and we're having time out from each other. On the big loom is the purple warp, and I started weaving yesterday. It seems to me this style of wavy/swirly networked twill has been done to death, but I've never done an asymmetrical one so I thought it's a good idea for a short warp.

The first is a wood-grain design; I love the way the color of the cloth changes depending on where I stand. In fact, I took Ben for a walk around the loom last night. 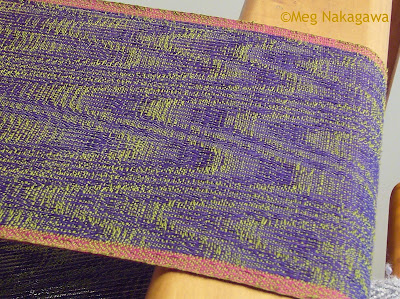 A bit of both. The color in the first two pics are pretty accurate on my monitor. 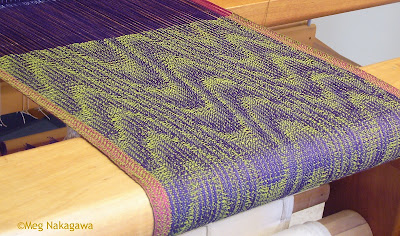 When I'm weaving, the cloth is even greener than this. 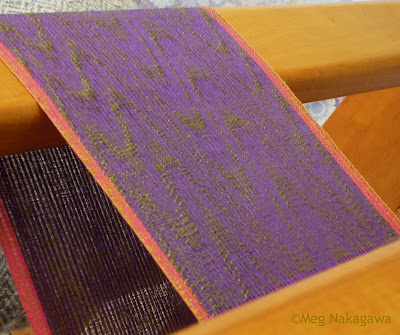 Though this is a blurred pic and the colors off, do you get the sense that from slightly to the back of the beater, the green almost disappears and I can only see bumps of the design.

To my shock horror, I discovered this olive green color has been discontinued in 20/2 width; it's a color I don't much like on its own but discovered in the "Prayers" and the subsequent warps that it does wonders in combinations particularly with purples, pinks and reds. Oh, bother! There is a slightly whiter, slightly yellower green, so I'd have to switch to that eventually. 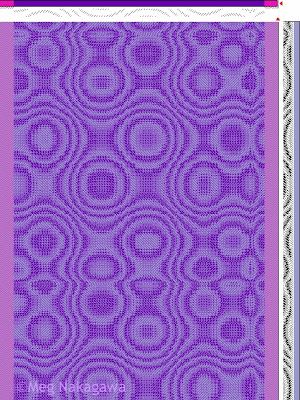 The second (and last on this warp) maybe be a more bubble-like design.

After these two, I'm dying to put on the last, short, hot pink warp, but I think it's high time the "pillars" warp went on. Before Monday, I still wasn't sure if I wanted to do the October exhibition with the group on account of my feeling so bad after the last meetings; I also contemplated asking the group if I could skip the meetings but just exhibit, (on account of the size of the gallery and mine being among the bigger pieces planned,) but I'm ready to commit to the exhibition this week, and to "sacrifice" the big loom to 20 meters of dusty gray warp. I'm allowing a blindingly colorful Log Cabin warp to go on the four-shaft, though, and will proceed concurrently. At least that's the plan.
Posted by Meg at 5/31/2012 12:01:00 PM