We were supposed to have had a partial eclipse this morning about an hour ago. I wasn't prepared, but we had a perfect weather for it, so I rummaged around the house to see if I can find something to view through. (Is that even English??) 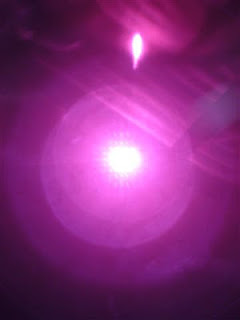 I first used a blue glass decanter and found the lights distorted too much. Next I put some red wine in a cheap square vinegar bottle. By this time there was a substantial dent in the circle, but you'd never guess, would you? 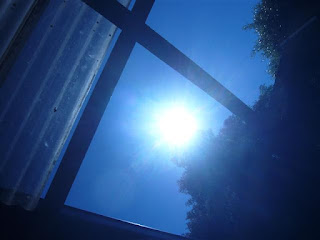 Second try: I did not look directly but tried to shoot it directly. By this time there was a substantial bit missing from the circle. Honest. 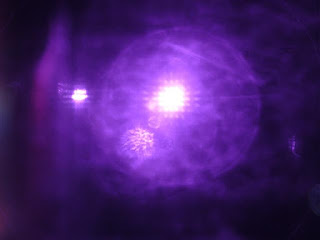 Third try: I switched to a tiny bottle of Sambuca flavoring in a much better-quality bottle than the vinegar. The sun appeared to be missing about 1/4 of its usual circle, not the camera wanted to cooperate. In NZ, the most you could see was 89% missing, the radio said. 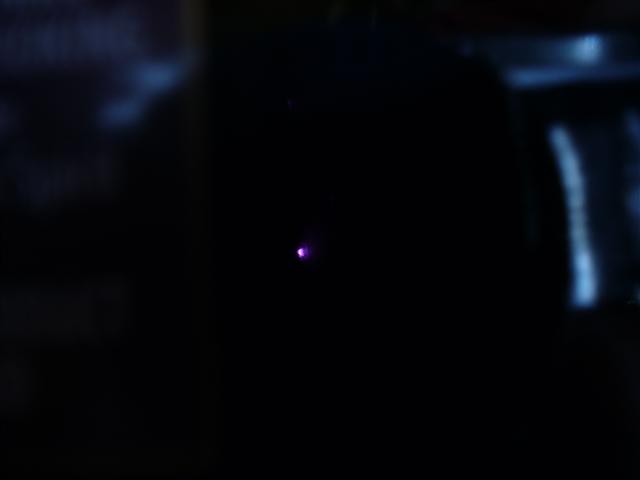 I put some distance between the Sambuca bottle and the camera. And now I do see a resemblance of an eclipse!

I listened to the birds for about an hour, if they would indicate that something is up. It felt as if they were particularly noisy just before, but I'm not sure if it had anything to do with the eclipse. I couldn't tell if it was noticeably darker, and it's been a cool morning anyway, so if I didn't hear on the radio that we had an eclipse, I get the feeling I wouldn't have known about it. I don't know if it is I who am so divorced from the potential mysteries of life, or we as species make those things up. But I'm glad I tried to experience this one.

Since the day after we hung the exhibition a lifetime ago, I've worked fairly consistently, and yet only if I'm lucky I'll finish weaving only the fourth piece this afternoon. That's a whopping 45 days for four medium-sized scarves. And the house is a mess and the garden, well, we won't go there. I haven't done much else besides go to figure drawing class four times. And I'm thinking of nothing else but work I need to get done before I go to Japan in Feb. The saddest thing is, I've been working consistently, so this must be my break neck speed. It's a turtle's neck; maybe I need to wear those less often.

I could weave faster if I didn't use multiple wefts, true, but then I'm weaving an unprecedented four-in-a-row using drafts from Handweaving.net, so the delay from multiple wefts is made up by the usual long-drawn draft editing. I could use fibers and sizes that's faster to weave and the next warp is cashmere at 16EPI, PPI not much more than that. But I need a few three-block drafts I'll make.

I can't weave for very long at one stretch. With the color-swapping, my attention span needs time to settle at the start and then runs out after a couple of hours and I start to make mistakes. Even with one weft, I have to leave the bench after about that long so I don't incite prolonged damage on my arms. So, a little bit at a time and every day is all I can do.