Both Saori-style weaving and mixed media art appear to allow, even encourage, spontaneity and imperfections which are the antithesis of how I try to weave, so naturally many questioned my motive for signing up for these workshops. In Australia, no less.

As regards Saori, I was curious why Kaz, who invested many years perfecting her skills, would want to reboot, whether this was a regression, and what she meant by Saori ways of thinking/approach; not exactly to bring her back from the dark side, but to understand.

In class we had five students, experienced weavers, second-generation weavers, an expert spinner and a textile person on her third stint at Kaz's. Unless we brought our warp, we were assigned looms dressed with black cotton in two weaving width and some "irregular plain threading" on two shafts, sometimes sleyed irregularly, for a weft-faced cloth. We were given free range with a big selection of wefts and some slivers and were shown a few mostly hand-manipulated techniques periodically, but otherwise we did as we pleased.

Most, but not all, the techniques I'd seen in Davenport's Hands on Rigid Heddle Weaving, and/or Gilmurray's Weaving Tricks way back, but some were new. I relied on the tapestry technique I picked up last year, because this is how I imagined Saori weaving "should" look like, but I tried others also.

I had a hard time with the black warp, not only because I hadn't woven with black for a long time and couldn't see what I was doing, but I once again had stereotype pictures of weft-faced, black-warped Saori cloths. For Day 2, Kaz gave me a red warp and I became a little flexible and fluent.

I steam-pressed my samples just before shooting, my normal process; these would have looked more "Saori-like" and 3D if I hadn't. 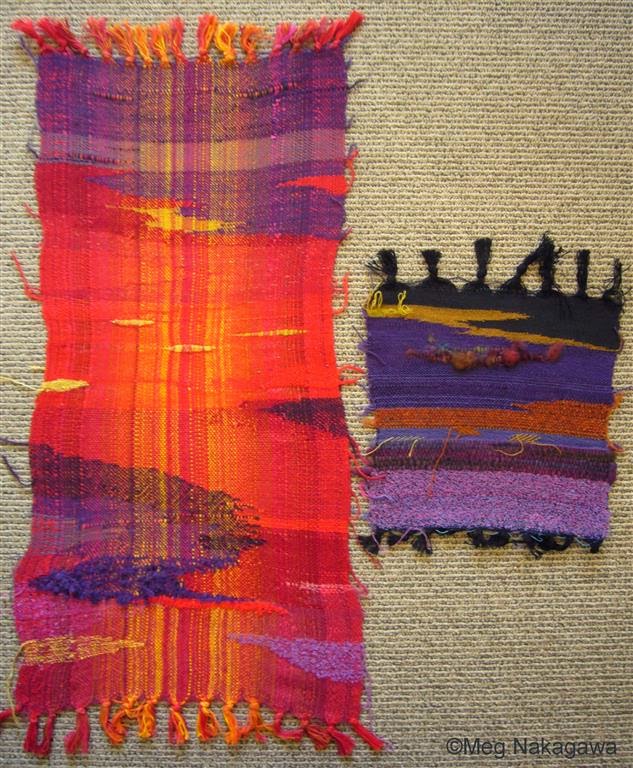 Day 1's black warp, and goodness me, I started with black wefts; Day 2 I recall starting with purples. 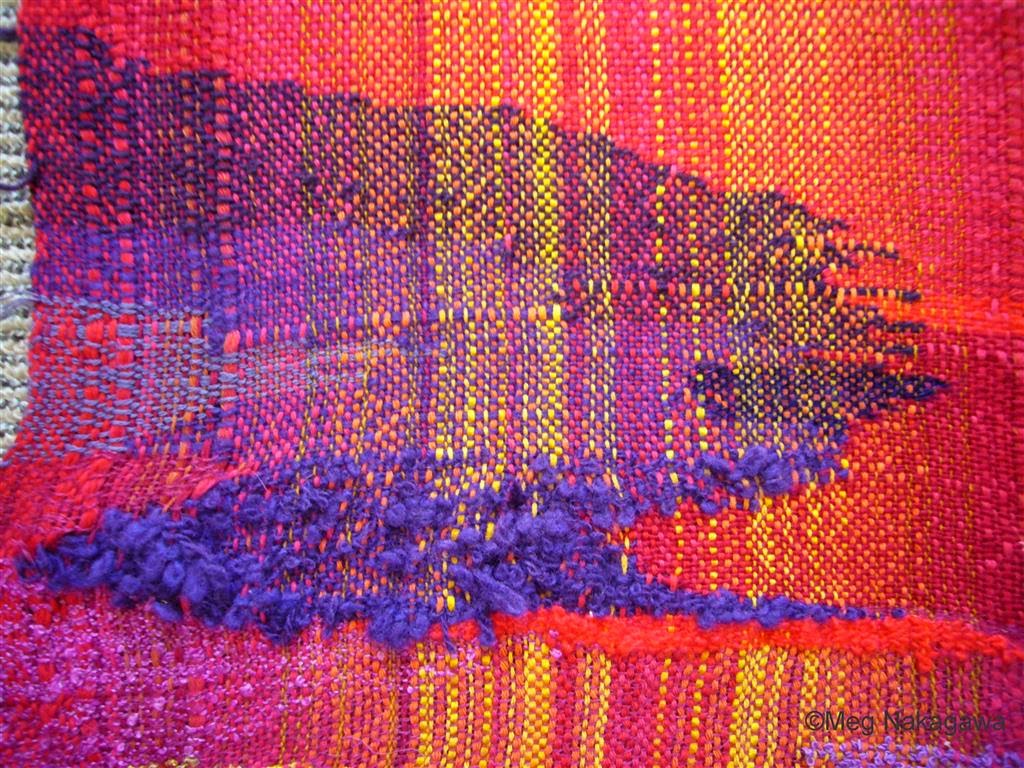 Over-reliance on the tapestry technique, thinly disguised by mixing bouclé. 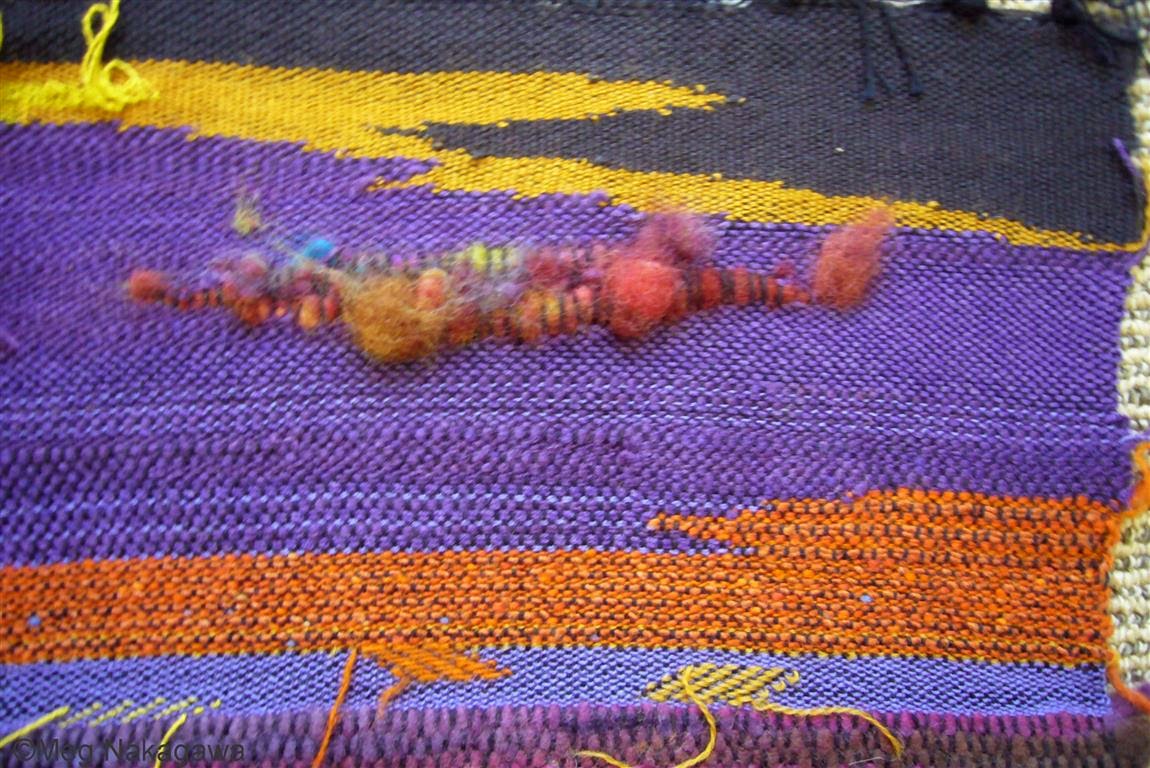 I did a Margery and included some twill pick up, about the only time I felt I was engaged in "my craft", to tell you the truth.

Make no mistake, I enjoyed the workshop. Being with other weavers was no small part and to see what they do on similar black warps. Kaz is a super teacher and Saori looms are lovely to work on; in fact, their foot looms were so quiet every sigh, comment and expletive of mine could be heard by all. And I was the only one who talked while working.

It was nice to rediscover hand-manipulated techniques; I see ways of combining them with many shafts; that includes looks I considered creating by dyeing or embroidery. Beyond that, if I were to pursue Saori style weaving, I'd have to practice so hard to achieve spontaneity and the loose look is not immediately to my taste to warrant the effort at this point.

I pinched a bout of Kaz's hand-dyed thrum; you may see these as wefts in the not-too distant future. 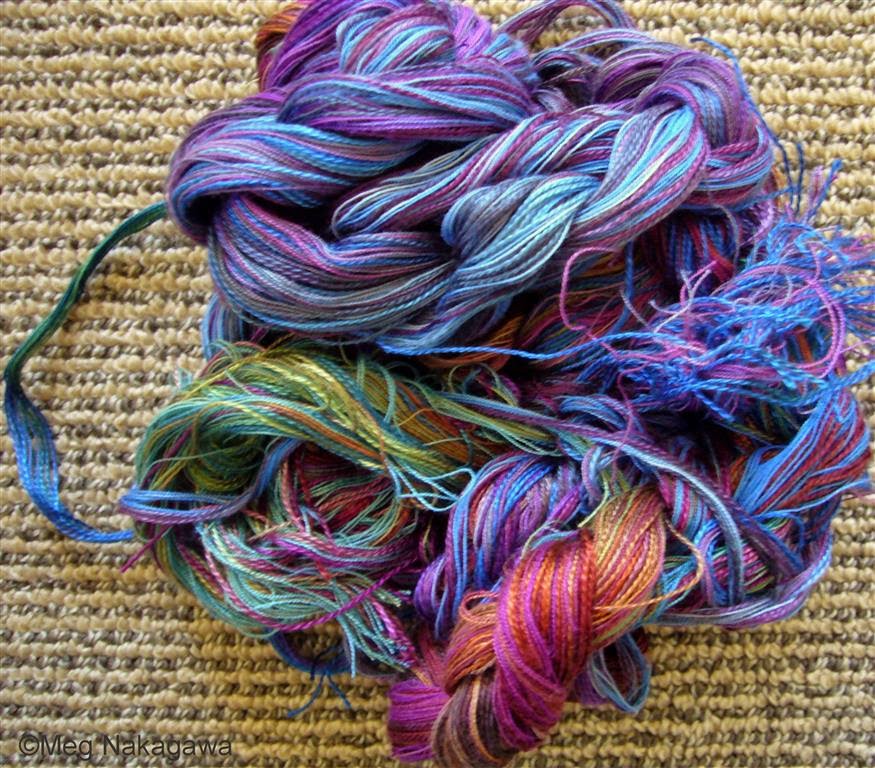 I can't remember what I was going to show you for a special August 5 post; I remember planning something but on the day I did something else, perhaps relating to Australia, and it feels like a lifetime ago. Anyway, August 5, 1995 was the day I wove my first project on my Rigid Heddle, after several samples including all the hand-manipulated techniques in the two books. Maybe I'll remember the anniversary next year, but maybe not; I didn't weave much while I worked until I quit my last job in late (?) August 2004, and lately I've concentrated on looking ahead rather than back.