Lately I've been thinking of weaving with cashmere on my big loom. I've had so many broken warps in the last little while, (is there ever a big while?) it was time I got analytical not just tenacious.

On the 16 with Texolv and also a good shed, I use the usual suspects mentioned above, alone and in combination, plus a loosely plied 100% 2/14 in combination with the them, as well as Doni's cashmere mix in multiple colors, at 15-, 18-,  21- and 24-EPI, I think, in twills as well as fussy network, using both the Schacht and a selection of Swedish lightweight boats.

The glaringly obvious is never to use the loose 2/14 in the warp: I declared so to Mom when I first saw the cone was mad to think I could get away with it combined with more reliable yarns; I just couldn't resist the colors. But beyond that, I'm starting to think it may not be only the closer setts but also the fussy network which lifts and drops all over the show increasing occasions where warp ends rub against neighbors mercilessly. Maybe cashmeres and fussies don't mix, but this is a theory still because on the Jack, several warps of Log Cabin at 18-EPI presented no trouble.

So, revisiting these gift box drafts has been on my mind; these at 18-EPI never broke a warp. There are endless, (well, many,) combinations I can make with four blocks of 4-end twills, but I can also reduce the background to plain and divide the remaining 14 into a number of twill and basket blocks.

The Saori-inspired idea is to use pickup in my fussis to accentuate small parts; for example, I may use unmercerized, saturated-colored cotton or even cashmere- or merino-silk mix sup weft in a diamond shape to accentuate the jewel-like look in "regal" looking design. (Is it India or Laos that has those looks?) This is also only an idea in my head but potentially useful.

Continuing on the theme of my emerging knowledge/acceptance of my own preferences and subsequent confidence in how I use them from yesterday, I've become unbothered by the flurry of new weaving books. It started out because of financial constraints some years ago, but then I already had ample guilt about buying any books but not reading them. My unsmall stash and (perceived) lack of access to new material (perceived as requisite) to sample/experiment also helped.

Plus, I'm a notoriously slow reader/understander, and even slower to sample/experiment, so not buying meant a more buoyant, unencumbered mindset. I could concentrate on ideas brewing in the background for ages or popping up, as we say in Japan, like mushrooms after rain.

It doesn't mean I don't want books, so if one sounds good, I'll get it later. You must, on your part, keep those reviews coming, please!!

All in all, I feel I've grown up a smidgen, not taller but a tad maturer in the last little while. Kaz reckons 57 is the magic age, when Saori's Jo Misao started weaving, so in my case it's just in the nick of time at 56 and 1/3.

This afternoon we're going to clean out the storage under the stairs and get to the bottom of that smell! Oh, Ben's home all week. 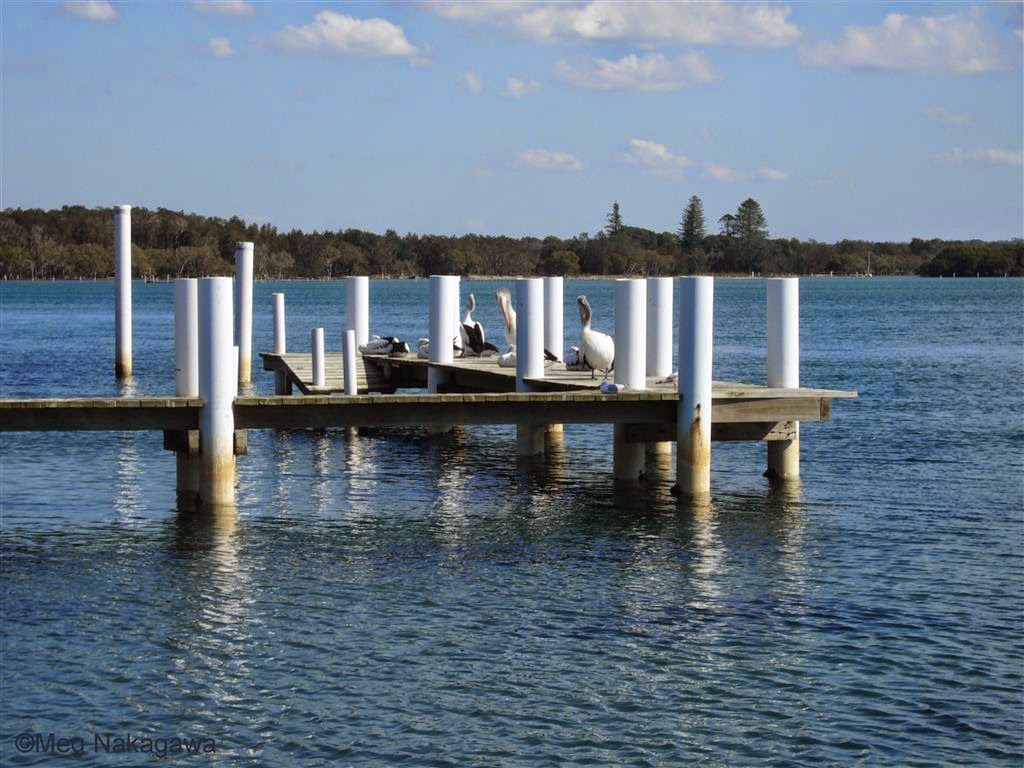 Kaz's neighbors: huge, scary-looking pelicans, shot from quite a distance away. The resort I stayed for the mixed media workshops had daily pelican feeding but I was too scared to go.
Posted by Meg at 8/25/2014 01:11:00 PM