Bread with Banana in It

I was productive before 10.30AM yesterday, but slowed down gradually, culminating in a three-hour Skype session with Mom, (she's currently working on a tiny tapestry I asked for a while back,) and did not do a whole heck of a lot else, except bake two loaves of bread and scrubbed some pots and pans. Darn.

I've already paid for most of my Austrian trip but still need some Oz cash. Watching exchange rates go up and down is a hobby I inherited from Dad; he started when I went to the US during high school. All this year we've been hearing the NZ$ is going to be strong against the Aussie $, culminating in an all time high around August. Well, have a look. 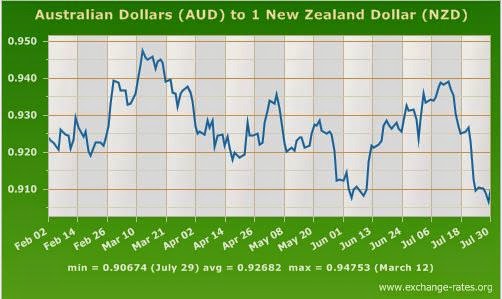 Alright, so it's just August. Mom always said we are no good at predictions so we might as well stop keeping tabs and relax. But it's worth it; I can hear Dad's exaggeratedly disappointments by the tiniest drops or elation by the tiniest climb, even when nobody is going anywhere and we aren't saving or loosing.

I'm waiting until next week for my cash.

There's little mystery in my life. By which I mean everything was explained by the most pragmatic or logical terms from an early age, so there was never room for Santa, Tooth Fairy, or ghosts. Or deity. The first I felt my simplistic, one-dimensional life was perhaps lacking in flavor was in Edinburgh and later at Culloden during our honeymoon; I felt a few ghosts were required to complete the landscape. Of course autumnal Scotland appeared much more "romantic" than our crowded noisy life in Yokohama; there was no room for the imperceptible. It took me years to get my head around such concepts as Harry Potter and The Lord of the Rings, but now I can't live without Discworld audiobooks.

What's this all about? Well, while thinking about, visualizing, and harvesting material for the mixed media workshops, first I wanted to stay as far, far away as possible from the brand/product-lead aesthetics of that section of mixed media, and to that end I've included hand-painted paper and thrums as collage material. I've also prepared small pieces of watercolor paper on which I will draw quick gesture drawings at airports and train stations in Australia.

I realize "layers upon layers" is still in in that world, and I don't want to make boring books I could have made in my kitchen, but at the same time I wanted to make something I like, with my preference for relative flatness and limitations on hues.

I tried to assign visual themes for each of the four books I'll be making: Dad, family home of almost 44 years, maybe weaving/textiles, drawing, or travels if finance wasn't an issue, but material concentrating on themes looked too contrived and I foresaw prescribed frame of mind amidst a fabulous environment.

Wouldn't you know a thought popped up while listening to Discworld: can I infuse magical powers so that each of my books would transport me and only me to a different time or place when I open it? 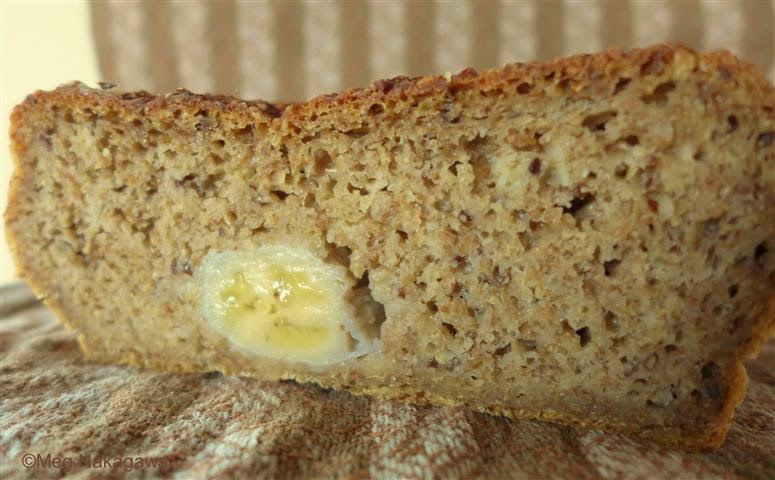 My latest bread with Banana in It; my breads have improved, but still not as dry/soft/airy as I like. I need to stop modifying the one no-knead gluten-free recipes.
Posted by Meg at 8/01/2014 01:08:00 PM