And in the Next Little While Part Uno 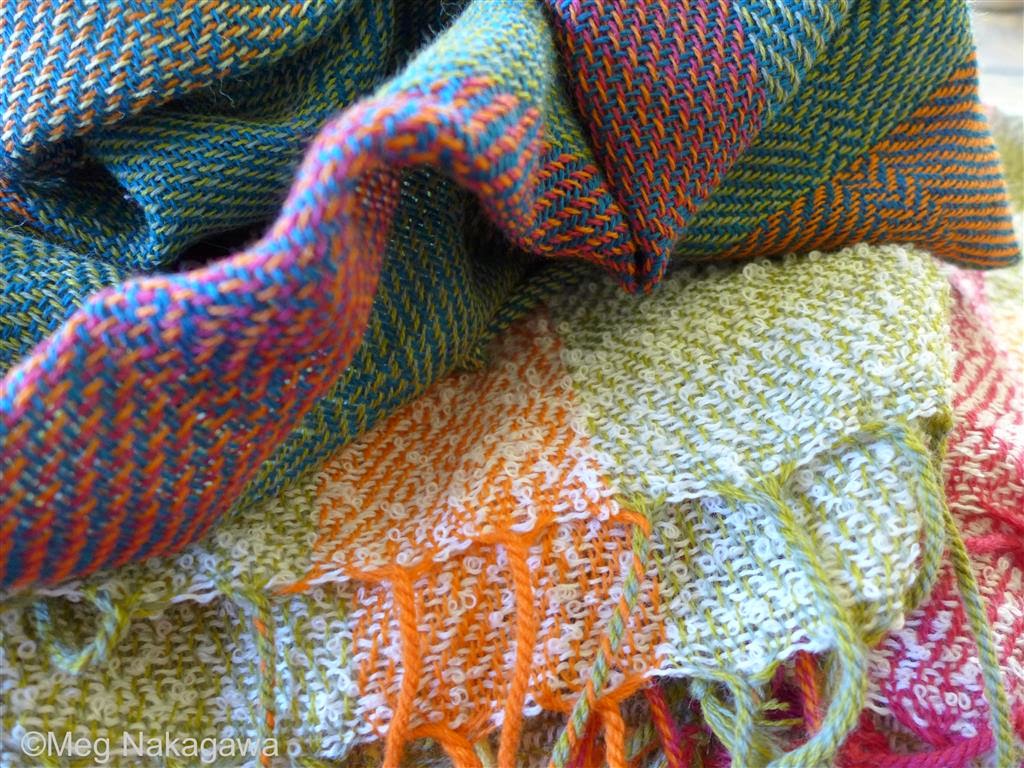 I wove two pieces in two days. This is great considering these may have been the widest in the reed I've ever woven. I wove standing up, stepping on the treadles deep in the loom to yank the sheds open, used the heavy shuttle, and bent over with my nose practically in the cloth to throw and catch. It was about 84cm/33". I kept drawing a caricature of myself in that wonderful Australia description, "flat out like a lizard drinking".

I felt good having finished two in two days as I hadn't done this in several years, but I was dissatisfied with the results; they are too simple, Dornick twill in both directions at different intervals. Plus, I used so much warp in the first (bottom) piece the second isn't long enough to be a wrap, so I'm calling it a VIP blanket, for a Very Important Pet. I have to hem it before I can wash both.

Although I was going to put on the other cute warp on Jack in an undulating twill immediately, I haven'; I'm staring at the big loom and the difficult gray warp again.

I watched the two Interweave vids by Laura Fry. With The Efficient Weaver, I was pleasantly surprised how much I discovered on my own through trial and error, making the most of the space, equipment and body I have, and ended up doing things "right", especially on the big loom. I don't do everything like Laura, (oh the speed of weaving,) but I'm working on many similar principles.

My big problem is I'm a short person weaving on normal person's looms. The big one is operated with an air compressor pedal, so we were able to calibrated it to almost optimal from the start, raising the pedal and the seat, and other than me getting on/off the high bench with some difficulty, it works well.

The treadle-operated Jack is a problem. I sometimes weave standing up; this is slow but does not present problems for the body. If I sit as weavers usually sit on the bench, my upper body is a little too low to see/throw comfortably but the legs/feet are a little too high for the treadles; I can work like this with narrow warps but not with wide ones. Sometimes I stand and lean on the bench but that's a little precarious as I'm never sure how much weight I can put on it. Ben built the bench exactly the height I asked and for years I experimented with cushions, distance from the treadles, angles, etc, but I haven't found the solution. Except to cut the loom so the cloth is lower and closer to the treadles, but that's a delicate operation we've been unwilling to undertake.

All this wouldn't be a problem if I don't have moral conundra and keep weaving on the big loom one after another.

Wet Finishing for Weavers was different from what I expected; I imagined seeing one (wool?) piece coming off the loom and worked till the end (pressing/drying?), and details for different fibers explained/shown/added, but perhaps because of the space constraints, it was a little abbreviated with tubs on tables. Still I'm very interested in wet finishing and Laura is the only weaver I know who talks about it, so it was fun. I especially enjoyed watcing Laura brushing mohair.

Again, I don't do things like Laura, and I've been trying to recall how I settled on the current wet-finish routines, but with wool, my first fiber, I made many phone calls to Mom and fine-tuned though trial and error. Although I got full approval from ex-teachers of the local weaving school, I'm not sure if all my wool prevents my fingers from poking through; I might have to dig out old samples, (finished the same way) and give them a go. 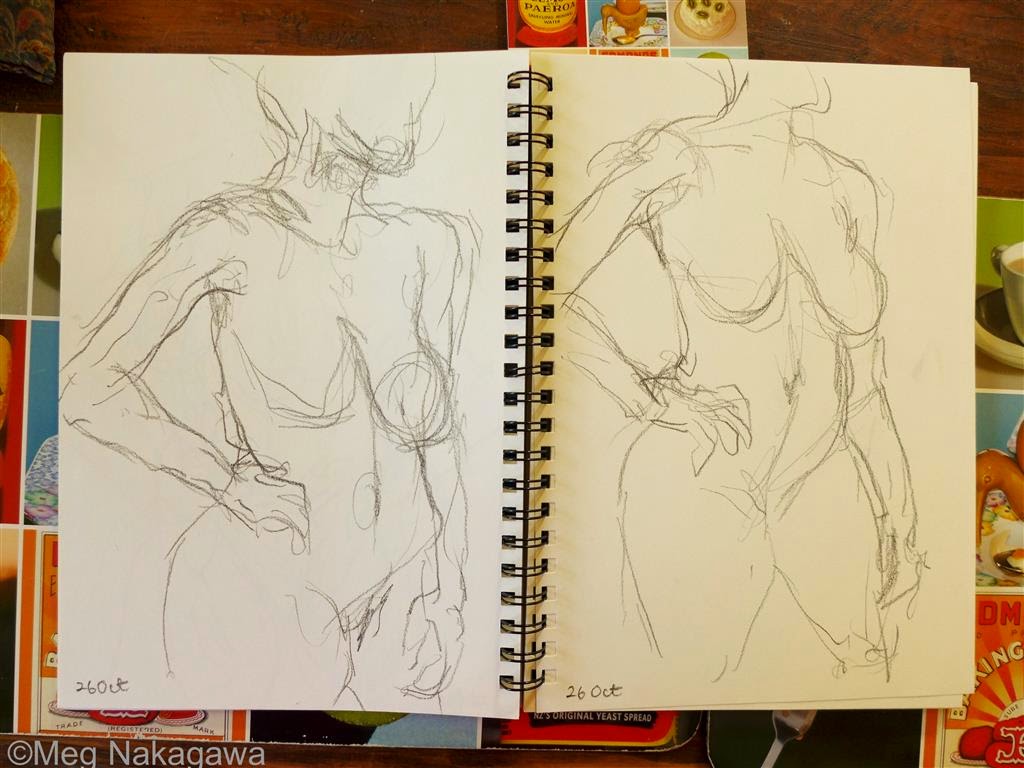 On Sunday, Sam, Annabelle and I went to Human Fruit Bowl and drew. The play part was very enjoyable, and the actress/model was very good but none of us could get the proportion of her head/face right, which was interesting.
Posted by Meg at 10/29/2014 09:30:00 AM