I finished weaving the red warp on the Jack on Wednesday and started cleaning the basement; it's still early-ish spring so the sunlight comes into the basement for only a few hours, and I had to finish cleaning on Thursday. Then I washed everything from the red warp. 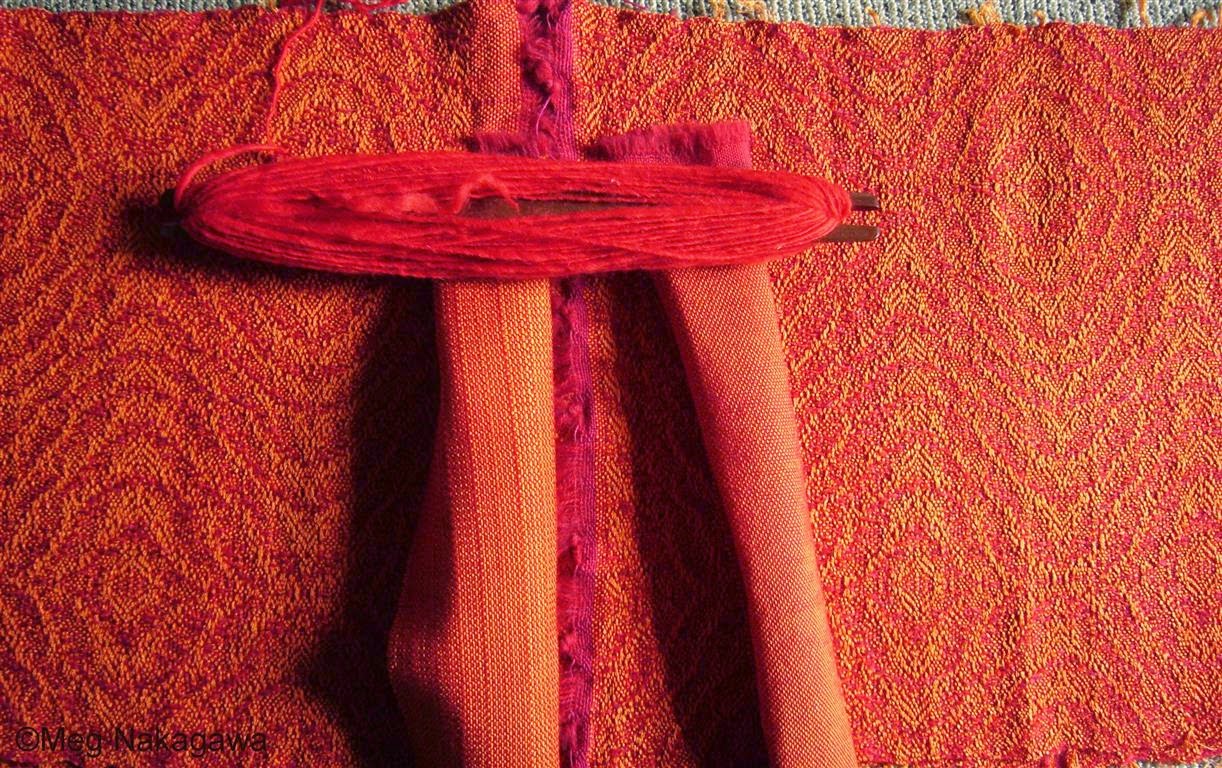 Bag handles held down to width with the stick shuttle. The plain weave one is softer and more obliging; the left one with the pattern is stiff. 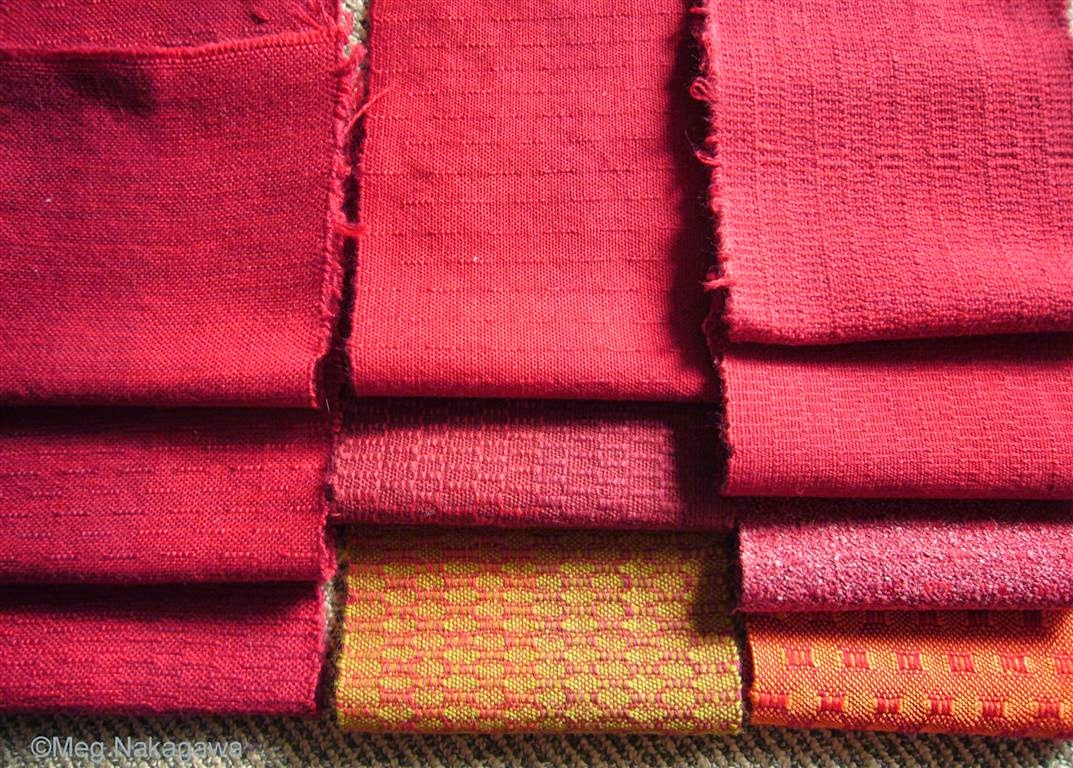 Nine bag exteriors and one longer warp-end piece with variously humorous selvedges; I calculated the on-loom measurements using a crude and general shrinkage rate for the whole lot, and some are too narrow to be made into small camera bags. I started thinking patchwork and piecing them together for something else. No rush. 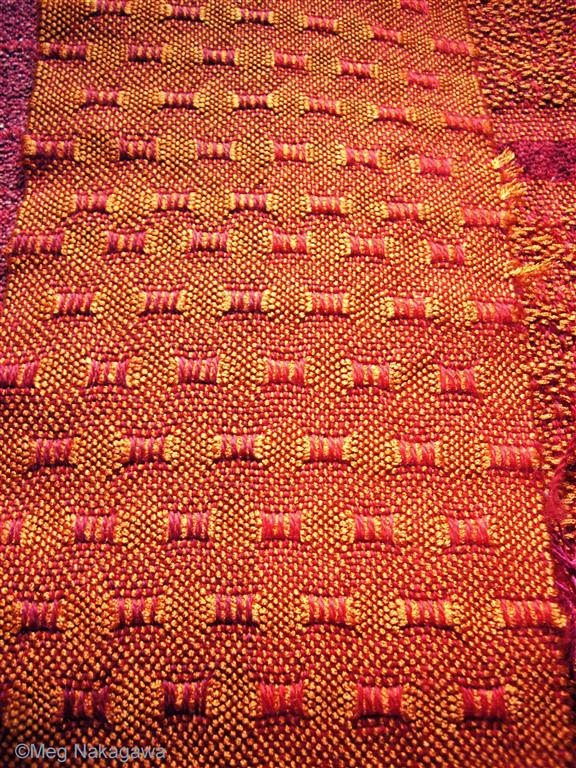 I wished you could see how wonderfully the orange silk shows the different reds in the warp. I have a small amount left, and plenty of the red wool, so another warp for a small something is most definitely in the plan. 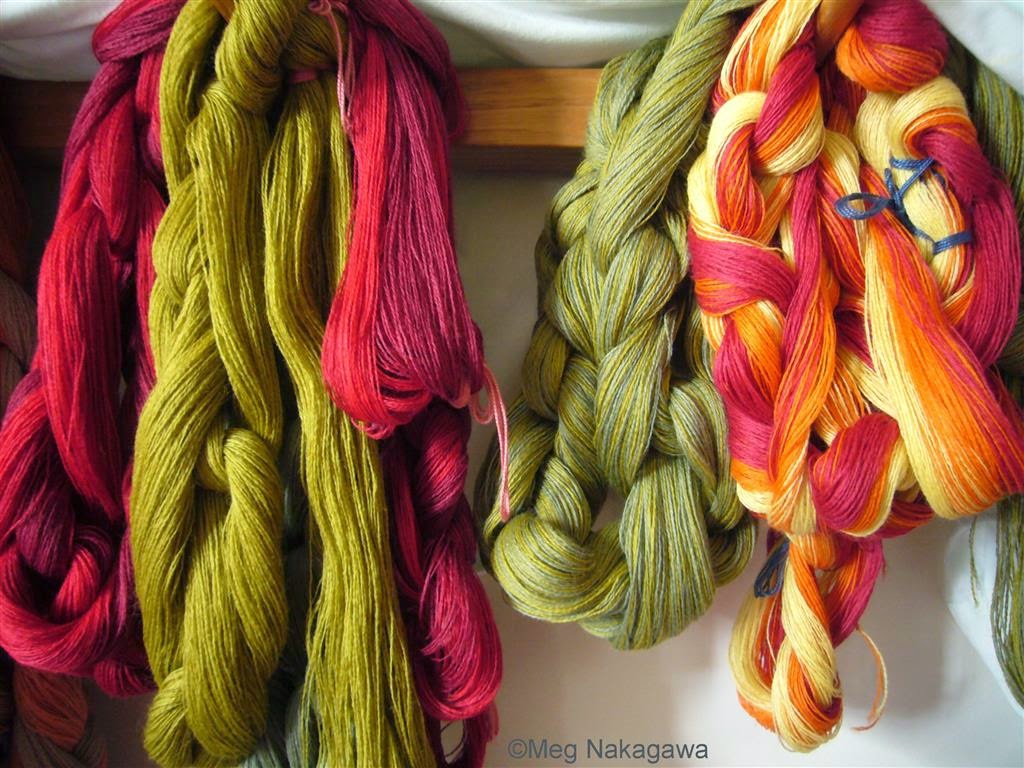 I also re-prioritized my wool stash-busting plan and today made two summer-themed warps. Tonight we're going out for a Thai dinner, (a very rare evening outing for the Nakagawas,) and see a Japanese film with Pat and Larry; I'll get some more weft yarns and borrow another tapestry book from Pat.

Enough about me; now onto Mom. After coming back from the Baltic nations, she was scheming to return there next year to see fibers and textiles, until last week. She met a young Iranian chap who lives in Yokohama and teaches rug technique all over Japan. (The name of his technique/style escapes me.) He trained as and is his-government-certified as a rug restorer, and Mom signed up for a three-session package. It came with a warped loom on loan, weft, personal instructions, (when she arrived there was only one other woman,) and finishing; if she doesn't finish in three goes, which will be the case, he couriers the loom to her house; she takes as long as she wants to finish and sends the loom back to him; he takes it off the loom and does whatever finishes required and sends the piece back to her. Mom's first piece is going to be around 17cm*17cm, but she's designing a very un-Persian undulating piece, apparently. She also met an older gent who needed a hobby after he retired, (or his wife need him to have one?) and started coming to class 10 years ago; professionally he used to design phones, and he has a biggish loom and all the necessaries at home and comes to show progress to the younger man. Mom said his work was big and very well-executed, and they enjoyed talking about the places they've travelled.

And, if the young man can get six or seven participants, he runs textile-saturated tours to Iran. My Dad wanted to go Iran for a long time and my parents were all set to go when a plane crashed in northern Iran, and either my parents or the tour cancelled. This would have been in 2004 because one of Munch's The Scream was stolen just before Mom left on a textile tour of Scandinavia; the plane crashed when she was flying home.

I've had wonderful Iranian friends in college and here, so if I can wing it, if Ben let's me, I'd certainly assess my situation and see if I can tag along.

Well, it's a lovely dream. And it's free to dream.

Meanwhile Mom is going to lunch at an Persian restaurant not far from her place we found online with her friends. Life is good.
Posted by Meg at 10/17/2014 05:09:00 PM