While in college, I did an independent study on Mishima Yukio's tetraology. He wrote a lot about aristocracy, of which, from memory, he may have been a part, but the stories sounded utterly foreign to me. Near the start of the first novel, a young aristocratic woman becomes pregnant, her family gives the child away, and sends her to a nunnery. Towards the conclusion of the last novel, a young man, possibly a descendent, visits the nun now in her 80s and asks her about the child. She replies, ever so politely but untroubled: "Something like that may have happened, but it was such long ago, I cannot recall."

In my 20's, I thought this was a wonderfully likely, prototypical reply from someone of her class, illusive, remorseless, no obligation to disclose. Aristocratic of worrier class women of the past in Japan often became nuns after being disgraced, such as by male heads-of-family loosing title, or becoming widowed in war, but they were not subjected to poverty, hard labor or much self-denial.

Except it may not be just that. Mom's been saying the same, with a similar attitude, about her past for a couple of years. I can't remember concrete examples, but I clearly remember being reminded of the novels, (which I hadn't thought of in decades,) the first time she said it a year and a half ago, and she didn't remember some seminal moments in my life.

I have always had bad memory even as a child/student, so it came with no surprise when I started noticing how little of my past I remember, but of late I have big blocks I can't recall. For example, even though I was a kid who liked school, I have little memory of school, even up to university, a phase in my life I looked forward to all my life. I also remember oh-so-little this side of coming to New Zealand. And the magnitude of the completeness of having-forgotten-ness astounds me.

And then there are different kinds of remembering. There are events I definitely remember, like the numerous times I was told by my parents to "enjoy the view" when we travelled in the US; I did not know the meaning of the word "view" so this troubled me to no end, but because my parents were in such awe I had to feign reverence, and by the time we got to Grand Canyon I had my act down pat. When they said, "look at the mountain/river/sunset/cactus," however, as a three/four/five-year-old, I was somewhat repulsed grownups were impressed by such mundane stuff.

I remember driving quite a long way into the country in Minnesota with Mr and Mrs Woods once; and I had to have a nap because I was expected to stay up late. Came the evening and there were a whole bunch of us sitting on one side of a body of water, and some fire and a few folks on another side, which was at first intriguing but it went on far too long for a wee one. Decades later, I asked Ron about it, and it turned out it was a outdoor, evening performance of Tale of Haiwatha across the lake, and the grownups enjoyed the occasion very much. Rightly so!

I don't know if my parents didn't explain things, or if I was a particularly dull or distracted child, but most of my childhood was spent trying to figure out my role, the rules, the game itself. It still is often.

And then there is the other kind of remembering; events I think I remember, or should remember, because of repeated retelling and/or photographs and memorabilia, but for which I have no physical memory. For example, while in kindergarten, Michelle's mom and mine took turns carpooling, and apparently we fought so much sometimes Mom had to stop and tell us to get out.  It went on for a whole school year, but I don't have a physical memory of it, though sometime in my past I apparently constructed a memory of being crammed in a VW-like narrow burgundy back seat of mom's car with Michelle, angry, screaming, and probably kicking the back of the front seat. Every time Mom retells the story, I "recall" this. Except neither of our 1960's cars had narrow back seats, especially for two five-year-olds, and probably not burgundy. I'll have to check with Mom. 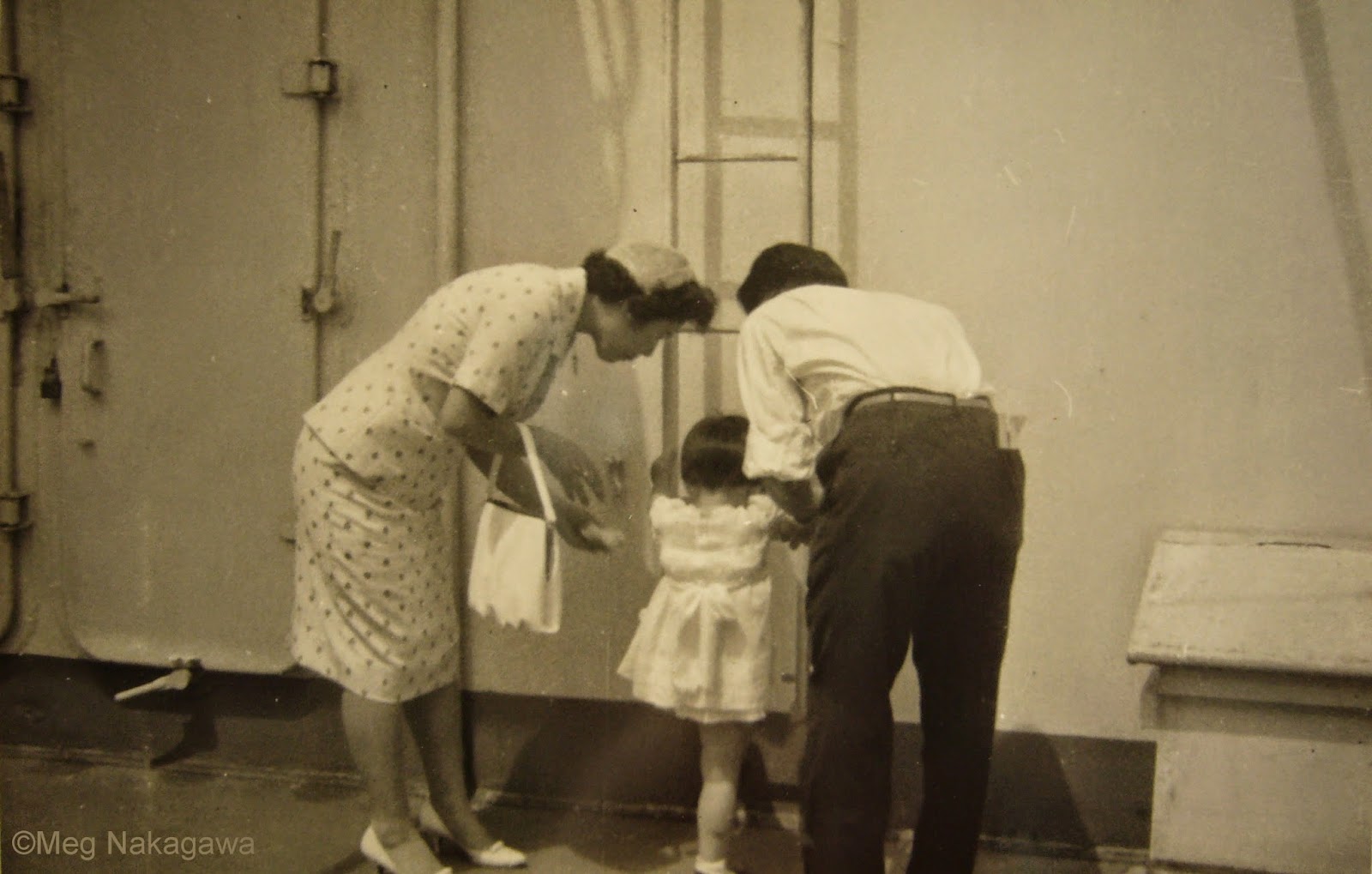 This is Dad, Mom and me the day before Dad left for the US on a freight ship in 1961. I have no recollection of this day, but have constructed a "remembering" because we have so many photos. I do remember, however, a few nights later, Mom singing to me in the dark, both of us sitting on the couch, I balling my eyes out because I missed Dad. I know which song, and I remember the yellow light above the sink. (Dad took the Greyhound bus from San Francisco to Minneapolis, learned the lay of the land, rented an apartment, and possibly got his driver's license and a car, before we arrived.)

Not remembering much from my past doesn't bother me so much, but I do wonder what new changes I have to accommodate in my future. As it is, I have to learn something so many times before I can really learn it. And I keep practicing whatever I learned, often and periodically, or I have to relearn it. Again.

I'm not keeping a diary this year; I was too lazy to last year and it ended up a weekly bullet list of things I remembered doing. Last Wednesday, the 7th, I already couldn't remember what I did on the 2nd and the 3rd. It's already been an interesting year.
Posted by Meg at 1/10/2015 08:11:00 PM