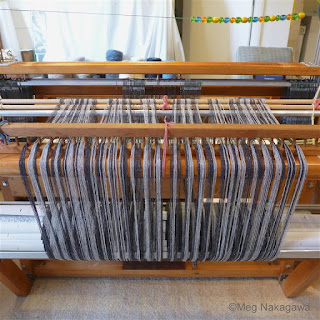 Buoyed by yesterday's cardio and remembering the lovely feel of old wool, I put on the gray and black warp from Mom's stash on the four-shaft today. Not only do these yarns have scales on, but they smell like sheep on rainy days and my hands receive a hint of grease whenever I handle them. Dreamy.

I have an array of weft candidates, (shortlist for today as above,) but to maintain that nostalgic, old-fashioned feel, I may stick to its own kind, i.e. the balls on the left. Because the colors are crisp and achromatic, the warp renders to a contemporary, masculine mood, (the colors are most reminiscent of Dad's formal, striped trousers he wore to his students' and alum's weddings,) and I also think a pale blue warp would look just as nice. (Those on the far right are Mom's hand-dyed handspuns.) Or whites. We'll see. Unlike the last time, I am not going to waste the warp on making fabric, but will try to get three or even four shawls from this warp.

Today's task would have been ever so much easier had I kept a record of the numbers of ends in a repeat, marked which sides of the two chains were to go on the outside/center of the cloth, or the brown warp's EPI on this blog as I usually do. Between the loom notebook, (on which I occasionally write down info but usually only how many cm I've woven,) and the ready-made warps notebook, (which usually has the color/fiber/size/source, intended EPI, and number of ends, only sporadically color distribution and other pertinent data.) I discovered I wove the brown warp at 12EPI, so I stared at the two chains, took a guess and lined them, put the lease sticks through the crosses, and the ends through a raddle as I counted. It turned out the numbers were:

ending at 8-8 on both sides. Of course I had the two chains the wrong way around so I got another pair of lease sticks, take them out of the raddle, move them across, and, oh, you get the picture. In short, not pretty.

This warp will most likely be threaded in Dornick again and be woven in something of the  2/2 flavour with one or two weft colors in a piece. It's not one of my "big idea" projects but a real pleasure because I know the loveliness of the finished cloth.
Posted by Meg at 11/21/2015 08:30:00 PM