I started making a warp on Thursday. I like making warps because in recent years this has become the first step in making ideas in my head come to life, whereas previously I tended to start with a draft. I've also felt I shouldn't make any more warps for a while since I have 20 waiting, but I needed a blah buster. (More later.) 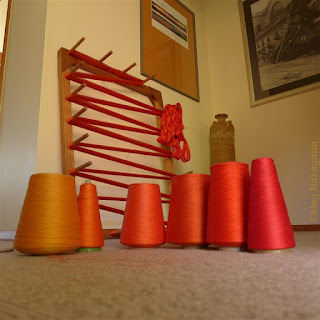 I've been thinking of a very orange warp for a while, in combination with A) hot pink/rose wefts, B) saturated dark purple wefts, and C) pale lavender/lilac wefts. I wanted to use five oranges, but I got stuck because I preferred the tangerine but didn't think I had enough of it, and whereas all others are 20/2s, the tangerine is an experimental effort by my source, twisting three 60/2 cottons together. At their request I made small samples and got results surprisingly similar to 20/2s, but I'm not 100% confident this would be the case in a larger piece combined with 20/2s.

Then I picked the orangest yellow I have, but the closer I got to reaching for the fifth cone, I didn't want to mix a yellow in a very orange warp, especially since the yellow might stick out with pink wefts. I think it is going to end up a narrower warp with just the four. At first it was going to be 28 inches wide on the loom, then 27.67 inches, but with only the four, I'll get only 21.67 inches. No biggie.

I needed a blah buster badly because the hotter temperatures, brighter sun, wind, bugs, allergy, and now four free-range dogs, are hindering my gardening And yet I have mentally abstained from weaving until I get "this bit done", except there is always three more bits that needed doing yesterday. About a month ago Ben and I decided we probably need two or even three more winters to make our place look nice, so now we don't feel as pressured as before, but goodness, I've got a lot of seedlings that need to go in the ground, it's taking a lot of time and energy and money, and it is never ending.

I've also been pondering uniqueness of loom-woven cloth. If you can get your hands on similar enough material and equipment, anything I weave is easily repeatable because I only use loom-controlled methods and commercial yarns. Heck, you'd probably improve on it because I beat so erratically.

In comparison, paintings, sculptures, or hand-crafted dolls, say, or even felting, are "more" unique. (Bad English, I know, but you get my point.) So I've been wondering what I can do, and what I'm willing to do, to make my pieces a little more unique. I tried the tapestry technique and though that sample didn't work I know it has potential; using/mixing handspun and/or dyeing/overdyeing work, and I've been looking into embroidering. (That's the first textile craft I tried.) And to this end, structures other than twill once in a while would also bring changes to the mood.

I'm not sure where I'm going with this, but I see more change in my preference; I no longer think handwoven cloth that looks mill-woven is what I want to make. This is great because goodness knows I tried to weave "perfect" cloths and I couldn't and I'm sick of disappointing myself. I'm not sure about same pattern all over, either. The question is, what kind of paw prints I want to leave on my weaving.
Posted by Meg at 11/01/2015 01:00:00 PM