Friday morning's insomnia was a whopper: I was wide awake by 1.30 and until well after 5.30. First I did the very wrong thing of staring, without my glasses, (so, about 10cm away from my eyeballs,) at the same FB posts over and over again, refreshing the screen in vein, and reading every single comment on the one political group I belong to. (I do belong to just one political group!) Then I moved onto Pinterest and looked up "handwoven shawls" and came across this stunner, (I hope you can see it without an account,) and spent the rest of purgatory admiring elegant plain weave pieces.

After about an hour's sleep the alarm went off so I got up, dazed and a bit delirious, which I think worked to my advantage. While going through the morning motions, I knew I still prefer to be weaving something rather than nothing. Even if there are too many scarves in this universe. At the same time I have this mantra, something a much senior (in career) weaver said early this century: "you have 16 shafts, (this was somewhat rare/new back then in NZ,) show us what 16 can do." I was lucky to have gotten 16 so early in my weaving life, but also true, I've been lazy in exploring and 4 and 8 especially, and this contributes to my finding what I do limited. Or lazy and boring. 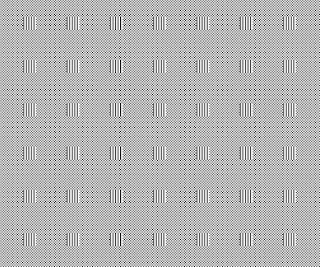 As a compromise, I contemplated weaving a variation of one of these gems, with two colors in the weft; with 16 shafts, I can manipulate 14 different spot positions. Although..... unless I did something regular with relatively short repeats, (and in my head I was making all kinds of random-seeming placements,) I would have to spend so much time designing treadling when these can be done more easily with a pick-up. And far more flexibly. Soooo... this may be the next cluster of projects on the four-shaft, while I'm still in the dark about what to do with the black merino/mohair mix on the 16. Still, I have one more executable idea. 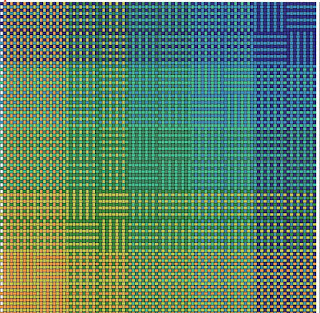 Another thing I've been contemplating all summer is log cabin where the warp moves on the color wheel, but for that I may need to buy a few cones of cashmere; (I'm running out of colors!) and buying more yarns at this stage is as needed as a hole in my head, so maybe not. It looked better in my head anyway.

I went to the second of ten adult art class, (dislike the name,) and it was better because Mark the teacher really does allows us to do whatever we like. I haven't brought anything home because I've been working on A2, I think, paper and he keeps them all for us and makes the available the following week. This week we drew objects with pencil and/or charcoal and/or white conte (??) pencil, and I worked standing up, with my paper on a low cabinet because I was smudging and rubbing and making the table-for-two shake so much. The charcoal didn't smudge smoothly to my satisfaction so  started wiping them with baby wipes, which worked well.

We got to see some detailed photos of his panels in the article, and goodness, there are fantastic details in layers, especially in the white parts. I now want to ask the school if I could come look at the panels. 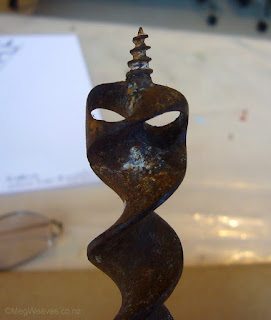 This was my model for Week 1, an giant antique drill bit. 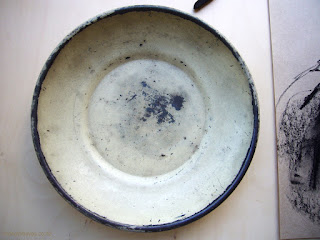 This was for yesterday, the plate/tray part of an antique scale.

We have to go on a stricter ketogenic diet at least for the next couple of months. I was so enjoying reading flavourful normal cookbooks I'm loathed to go back to anything with "Diet" in the title, but such is life. I don't like the acronyms nor the screamy-shoutiness in Ketogenic FB pages and groups, so I'll read up online and go back to the lower-keyed Blood Sugar Diet books, (of which we have a few,) and modify them to take out as much carbo as humanly possible; at least that's the plan for now. New rude surprise: we're not only "off" onions and beetroot, but also tomato for the time being! 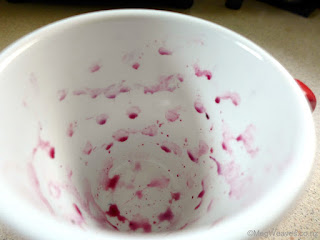 I started making mental notes of what else we need to rid from pantry/fridge, and reduced the frozen blueberry stock while at it. I love the similar-but-not-same patterns. (Not OK that I still see this as Ben's diete; it works just as well for overweight, grump weavers!)
Posted by Meg at 2/10/2018 02:28:00 PM