Life for an anxious, mildly-depressed hermitess hasn't been easy. I've been thinking of too many things; reading possibly too much, (for me, that is; in the collective human experience, probably not enough and/or not the right stuff;) finding no inspiration/enthusiasm anywhere; overwhelmed by "this is not what I want to be making" dread; escaping to half-hearted housework, (not bad in itself, but if I'm going to clean, I really should clean with gusto.) Ben's diabetes control is not going so well, to which I react in two ways, a) "ultimately it's not my problem," but b) it's not just a moral failure but an intellectual one; we know better. The garden most definitely looks like the residence of a scary old hag in children's picture books; convolvulus does such a great job.

I had a right old temper tantrum at JB's after dinner on the night of the last post, kind of a cumulative eruption of stuff I've been thinking about. So a fortnight ago today I was wondering what an "emotional breakdown" looks like, but didn't search because I was afraid of what I might find. Also contemplated if I needed horse tranquilizer instead; this appealed to me more, a deep sleep and a restart. Can't explain any more than that; haven't talked to anyone about it; I can't remember the big picture, but I do know part of it was discovering how far/long I've disengaged from Nelson's art scene.

Ben's been coughing for a month and it turned out he has Whooping Cough! Apparently there is no age limit to that and apparently it's been going around town. For about ten days I felt punch-drunk from my tantrum, but last weekend Ben had near-39C temps for a day and a half, followed by me, though not that high, for a day, and earlier this week I felt punch-drunk from the weekend. We're fine now; Ben's properly medicated although his ribs/sides hurt from all the coughing, and good or bad I'd forgotten the details about my tantrum. Is that good or bad??

We had a hot, and rare for Nelson, humid January, worst on record, followed by some crazy rain/tidal surge around the Big Bloody Moon, and now we're heading for some Feb Hot, but it hasn't been as humid and evenings/mornings are cooler so I'm coping better. I even managed three hours of weeding one day, and it shocked me how little I got done; that'll be my life for this autumn/winter, and I think that's OK. I've attempted to go outside several times since, but anxiety/"other pressing stuff" or in one case, 38C temps, (mine not the atmosphere,) got in the way.

Life goes on; I'm better at doing something rather than nothing, (this being the reason I think I'm not depressed, just grumpy, OR I'm better at managing the mild end of depression. Whichever, whatever works.) Abstract doodles have become superb distraction/therapy; they make me concentrate on the moment; stop the noise except the cicadas; are taking longer to complete, and unlike the faces last year, I go back and look at I've done often. 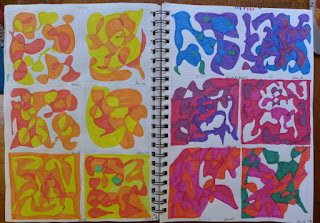 I did these shortly after my tantrum and for days they alarmed me, but today they look, oh, bright. I'm more interested in the shapes now. 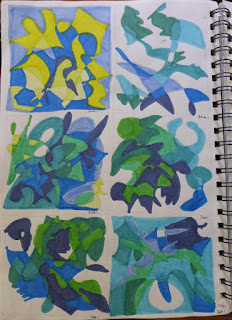 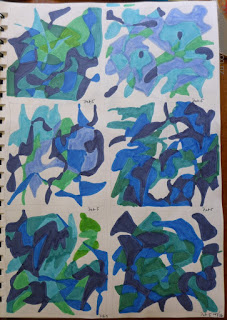 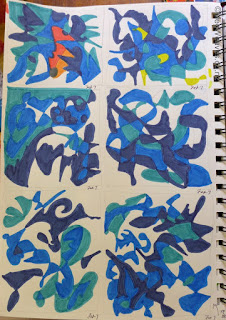 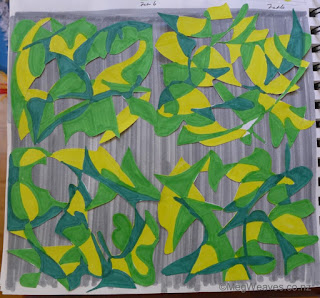 After I started to leave some shapes white, I got curious. I drew a few on 120gms inkjet paper so I could cut them out. They were interesting but the sharp ends kept sticking to my clothes and breaking so I pasted these here. I need heavier paper for future experiments. 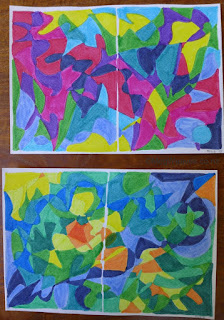 I also drew some on watercolor paper; I think I just wanted to see how saturated the ink pen ink  would look. These sheets are A5, so each section is A6, (or 1/4 of A4,) while the daily squares are usually 1/6 of A4. I'm not sure where I'm going with these but may try with watercolor.

I haven't woven since I took out the banged wefts from the cashmere warp. I promptly put on that black merino-mohair warp on the big loom, and came up with more-or-less-the-same pretty/fussy twill drafts with weft options, both for straight forward weaving and clasped wefts, but there's the problem: they are more or less the same as my previous stuff. And who needs another lukewarm scarf in this world.

I've been so keen to weave but every time I go downstairs, mental pictures of the end products tease/haunt me to the point I am debilitated. And unlike other times, it hasn't helped to look at other weavers' lovely work. What's with that??? Oh, but have you seen this?????

Refinery is looking for proposals for exhibitions and I reread their new forms. Hum. The Suter started art classes for adults, beginners and not-beginners, and because I've had zero tutorage in painting, I enrolled in the beginners. I went to the first class last Friday. The teacher is an ex-high school teacher and a lovely guy, but in adult classes, constantly soliciting input disrupts the flow, becauses every student a question/opinion, some oh-so-many-more than others, and so far my reaction has been hohum. Also started MOMA's free online course on Modern Art. It's had interesting and hohum parts, nothing yet startling and new to me, but then no reason to give up on my third week. There was one "try this" kind of an assignment I want to write about later.

Changing Threads is happening again and I looked at it some time ago but, you know, I never got "fiber art" and didn't feel energetic enough to give it a go, (the head stuff, not the making part, which I noted.) But Refinery is doing something new, called RAW, and this outside art stuff may be the thing for me; they want to see the artwork by my birthday, (55 days to go,) so that could be a sign from above/below/backstage. Or just a coincidence.

Oh, I do so exhaust myself with my own lukewarm outlook.

There is one thing I need to clarify: my comment about the Suter shop. I knew this would be a difficult one to get across accurately so I sat on it for months but still may have got it wrong.

When we first came to New Zealand, we were told, on average, Kiwis live in the same house for seven years. That's the average, and we knew people who never finished a school year in the same house as the one they started in. As well, I don't know if this is a New Zealand thing, how times are changing, or where I'm at in my life, but relationships of all kinds don't seem to last as long as I thought they were supposed to, especially where business is concerned. Also, I'm that person who never knows when to leave a party.

What I've been mulling since Andrea left the Suter, on hearing my friends' concerns, and seeing different emphasis in gallery stores while travelling South, has been this: have I had a good run at the Suter and is it time for me to leave? Are textiles not what they want any more? (I have had galleries tell me textiles are too hard, so no thanks, including at the Red years ago.) And I am aware how much I've dislodged from the real world. So I wondering how accurately I read signs.

The shop manager's name is Ailsa; I just looked up, because I can never remember how to spell it. It's pronounced like the lioness; I asked someone in the early days but I can't remember and all these months later I'm too embarrassed to check. Ailsa really has a lovely smile, the sort I associate with peace of mind. So I didn't write to diss her. But I'm still frustrated with the situation. And I hate their new forms.

So, yeah, JB, I have been trying to keep a low profile, (not hard when you're not even 150cm,) from myself more than any-thing/body else, but thanks for the text.

Now on to prepping Art with Mom Session V, this afternoon.  (Last week we did blind contours of buildings/structures/cityscapes and painted them in abstract/emotional colors like, "after all the children have left". She hated it; I love them. 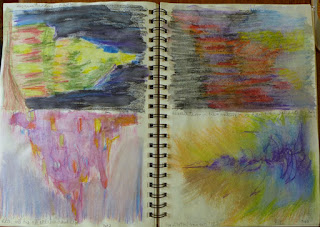