The title line is a picture of me being pulled in two directions.

I thought I was getting all better by Friday so I went to the art class; ran into Annabelle for the second time since our exhibition, (her life is so good now, I'm glad;) then went to Rosie's and had a great time, except I was coughing, and still we talked non-stop. I didn't feel bad one bit, just coughing, but too often, too loudly, and I'd say, rudely. Oh, dear. So, I made a doctor's appointment at 4.30 tomorrow, in time to run into a pharmacy before closing.

In a way, I knew I must see Doc Karl when Ben came home with whooping cough med; even though I wasn't sick, and my "cold" manifested in different ways, I had read that whooping cough is highly contagious. I stayed home until I felt I was almost over it, but that must have been wishful thinking. The foremost excuse is, now is not the time for me to get sick when Ben's blood sugar level and our going back to a no-carb diet are our priorities, and I'm having a hard enough time keeping that under control, so, tough it out, kid! But also, I'm honestly fired up about my new project. I even made a label, "RAW/Syrie" just now to tag the posts. See =>>>>>

(EDIT: the label has changed several times but it's "Syrie" until/unless it's renamed in its final stage.)

So what am I thinking? If you've been around Unravelling, you know I need a picture of the finished project, albeit incomplete, constantly morphing, or it ends up only a step in the process. The picture is constantly morphing now, and even when it settles it's something I can't "show" you until it's hung at the Refinery, (because I'm' thinking big/long,) if selected. But I hate dropping coy hints without any meat, so here are the starting points:

* It's going to be something like the pillars, but the bottom part sewn together to make a real tube, to sit directly on the floor, then different panels opening up. Individual piece may be narrower but need to be longer and I'm aiming for five panels if possible.

* The panels are going to be predominantly red, with squares/rectangles of different sizes in red, orange, yellow, grays and black; possibly more. These represent windows.

* Background, my short history: You know I worked at the Syrian Embassy in Tokyo for a year. Back in the '80s Syria, and Iraq for that matter, were cosmopolitan, "Westernized" countries where at least in the city life looked what we'd call, "normal"; there were no headscarves, women were educated and worked, etc.1 The major security concerns were Gaza/West Bank, recently Lebanon, and Egypt where "fundamentalist" were gaining strength. So I was honestly shocked at what happened in Syria since Arab Spring; I knew Assad the Dad ruled with iron fists, but hadn't realized Assad the Son followed in the footsteps. So I've been thinking very vaguely of a series of red pillars named "Syrie" for a couple of years. (1I worked at the embassy, a branch of the Foreign Ministry, so the information I received were the official versions, but we also met some Japanese who travelled there, and heard stories that didn't contradict the official line too much.)

* Background, the name: I grew up in the US in the 70's when America's worst foes were "Syria and Libya", so the English "Syria" evokes in me more of infantile name-calling, rather than the country herself. I'm interested in the country. "Syrie" is the French name; they colonized Syria 1923-'46 under League of Nations mandate, so it's not a great name, but I can't type Arabic alphabets easily, either. (It's سوريا, apparently.) "Syrie" is a working title because I don't like colonization, either, but for me for now it's better than the American implications that was pressed on me.

* In trying to work out how I could make something to express/represent the lament, the devastation, the losses/changes in the lives of everyday Syrians, I searched for recent still photos. (I can't look at too many at one time, and I don't have the stomach for vids.) but I was overwhelmed by the large number of almost black-and-white/sepia pics showing the aftermath, buildings with windows blown out, conveying a perverted kind of silence, stillness, and, dare I say, beauty, a done deal. "Oh, look at the city reduced to rubble." Although I don't like looking at them, I expected people, running, even bleeding, limping, or carrying others, covered in soot, similar to what we saw after 9/11. At the very least, buildings as they burn, explosions as bombs drop. The photos also conveyed the callousness of whoever is bombing them, sometimes from a distance, sometimes, I suspect, with drones. (I didn't check.) The human ability to put a distance to others' suffering, destruction of lives/culture/history/heritage, borne of physical/emotional/(cultural) distance. The dismissal of the magnitude. So that is my starting point.

* Current Issues: The picture in my head is still about the buildings because I love architecture and buildings/structures are easier to express in the grid that is weaving. On the technical side, I don't want to use pick up if I'm going to have to make five, say, of 4m panels; I can change weft colors, but I also prefer to weave with one shuttle at a time. Much reading required. 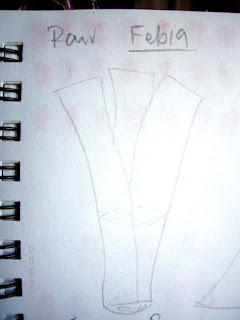 This is the doodle that made me think I might be able to do this. So, I'll be making a giant red leek.

On another note, I finished threading the black merino/mohair yesterday so I can start sampling. I also resumed counting the days to my birthday, (36), not for the old stash-busting goal, (ha ha ha,) not for my Yikes-60-countdown, but that's the day proposals for RAW are due. Another important date is May 7, when all accepted "out of town" pieces are due at the Refinery; typical of me, if I don't get the thing done by April 3, (most likely,) I will submit a proposal with whatever I will have completed, and take the time to weave for another month. And in a way it's nice to be working on the big loom while I think further about the project.

I have an alternative plan, although it doesn't appeal to me at this stage; if I can't manage the weaving, I could paint/modify the pillars for this project. Those pieces are stiffish in luxurious wool, (actually more like buildings made of stones,) but not quite long enough, while I'm thinking of thinner, more flimsy cloth for this project. I am keeping all options open.