On the drive back home that fateful Wednesday evening, (you may all laugh,) Barbara asked me what I do; she might have meant if I work outside of weaving, or weave somewhere else, but I didn't have the presence of mind to say, "read, fume, and waste oxegen," so I said I live in my basement, (true, as it had been very hot until then,) and when she asked if I work with textiles all day, I said yes. She lives next door so she can see what I don't do. But I'm a half-lier.

I might have whooping cough; might not. My symptoms are different from Ben's so we thought it's a a regular cold, although my regular seldom includes coughing. The thing about those of us who had a terribly healthy childhood/young-adulthood is, (say, someone who saw a doctor once between ages 9 and 43-ish?) we are so nonchalant about seeing doctors because it's really usually nothing. My parents were like that until well after 70. Ugh. This morning Ben and I were laughing in exasperation we've become "those people" who are never 100% well any more!

Anyhoo, recovering (?) from a couple of real ugh days, today I did some abstracts in my sketchbook, and then these on watercolor paper. 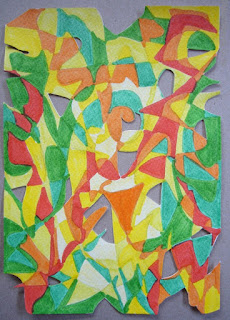 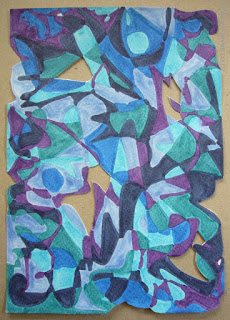 That I'm terribly near-sided works well with these; I take off my glasses and work with the paper about 10cm away from my face; when I sit up straight, the shapes are blurred but not how colors are distributed/positioned. I've been interested in movements, how the different colors travel across the A5 paper, and my eyes do exactly what I need them to do.

Not sure about where I'm going with these, though.

I may have mentioned an interesting do-if-you-like assignment in the MOMA course. From memory, the instructions were to take pictures of a familiar/interesting object from different angles; cut them up; past them together to create an image showing the object. Something like that. Of course I immediately thought of my one-time failed attempt at cubism, and was fired up.

I shot my camera and printed them out wallet size in B/W. The weather earlier today was so changeable and all my shots were very dark, so the hardest part was cutting them up, but I tried a couple of images. 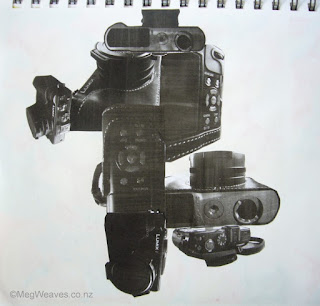 The first one I just picked up cut pieces and pasted one after another. 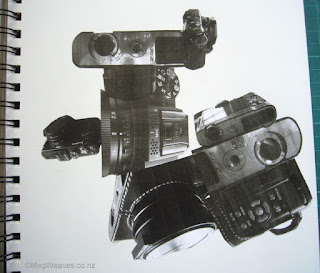 For the second, I pick up pieces and pasted, and for subsequent pieces, thought of placement in relation to what's already there.

So far they look like quirky-but-not-successful Surrealism collages, but I'm interested in the Cubist look, so I'll keep going. I've doodled some Picasso portraits last year and saw how difficult abstraction à la Cubism was, but also saw some clues. Today I just cut the camera shapes in full, (i.e. the whole of what was included in each photo,) but next time 1) I might try a more controlled approach, i.e. not paste until I have the bigger picture, 2) maybe not cut out the shapes unless necessary and/or cut further, i.e. not keep the whole of what's in the photo.

It's great fun; I recommend it. But I don't know where this is going.

While reading last week's MOMA course material, (which have been between super interesting to surprisingly revealing to why-oh-why,) I wondered once again if the artist himself/herself thought all that before executing the artwork. I'm sure some did/have, but some art writing/descriptions go so far into the artists' mind and I can't help but think some are way-off, the-writer-needs-a-shrink type speculations.

That lead me to think about how I work, where my happy place may be, balancing a) enough thinking and design time to feel I'm making each piece special, b) a measure of productivity, ergo, c) overall "job" satisfaction or perception of self-worth living this life, and other stuff like d) speed of stash reduction, d) pricing/money, etc. Because I spend too much time thinking; I know this.

I'd love to be weaving just now but I sort of can't. Well, now that I went downstairs to take the pic, I could, just not put a new warp comfortably on either loom. I don't blame you if you can't tell the difference between the usual state of the room vs today. 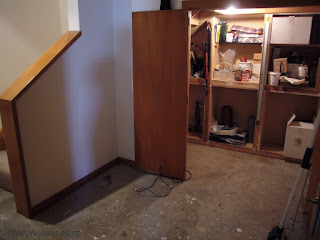 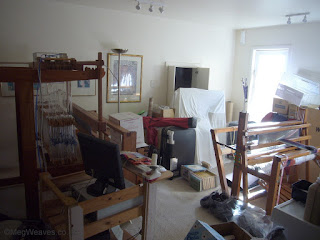 Our basement, (not the weaving part but the bottom of the stairway and a tiny storage beside,) got flooded in the latest, second rain on Sunday, although it might have started a week ago Thursday in the first and we didn't notice. This part was a gun room (!) from the original owners and has a lot of concrete, (good for stairway, don't you think?) including the floor. The door to the weaving space is wooden but used to have three locks plus and a deadbolt. The carpet/underlay was never secured to the floor but just cut to size and fitted in the space. It's not a big deal; we've taken out them outside to dry earlier in the week, but they waited in the garage today as we were expecting showers. We hope to disinfect the underlay and wash the wool carpet with vinegar on the weekend, and put them back just on the stairwell but probably not in the storage.

Tree cutters came this afternoon with the biggest truck AND tree-crunching mechanism attached at the back: my first thought was, Nelson, hills, don't you have more easily maneuverable vehicles? I thought they came for me as I'm supposed to have two trees trimmed because they are too close to the power lines, but it was for my neighbour. I was terribly embarrassed about the state of my place, as usual, not that there was anything I could do then. Two other neighbours came out to have a look see, and we said hello, but one couldn't help but look up at our property. I cringe to think how others see us, me, I wasn't raised like this, and today I really cringed to see our place from someone else's perspective. Our place seldom look OK, but this summer it's most definitely mental-health territory, so old-injury/diabetes/whooping cough notwithstanding, I have to solicit Ben's help this season to make some visible-even-to-those-who-don't-live-here stuff happen.