Doc Karl didn't tell me if I have whooping cough, and I forgot to ask if I'm contagious, but he told Ben he had it, and I was given the same antibiotic as Ben's, plus a few supplements, same as Ben's. So there we have it. I might ring the RN tomorrow before I decide about Friday morning art class or film afternoon with Esther.

Now for the sample. Not pressed. 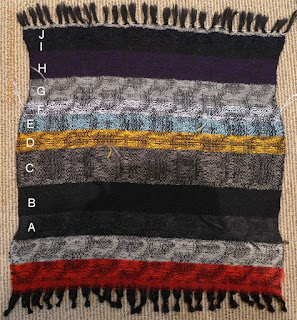 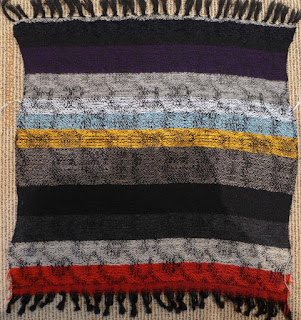 Originally I designed this draft to be woven in skinny cottons at 42EPI and about the same PPI, (roughly half each way or a quarter in area,) so as I started weaving, BOOM!, I was reeling back on the loom bench at the motifs' bigness! Although the size, in this context, is slowly growing on me.

1) The red and the natural at the start are not weft candidates but sampling, using leftover yarns, to help me look for threading/sleying mistakes. I like the proportion of warp/weft sizes, even though I tend to beat really hard in samples, so they are not accurate representation. It's cloudy today, so the natural weft looks appealing.

2) It's been a while since I wove with yarns in the same color but different sheen, (a style I love,) so I tried black possum/merino/silk(B) and cashmere(I). Because of the sheen from the mohair in the warp, the warp is a very black black, but neither show marked contrast, (I) marginally better. Ditto with the two grays, in P/M/S(A) and cashmere(G), although all feel great, the P/M/S cushier and thicker. 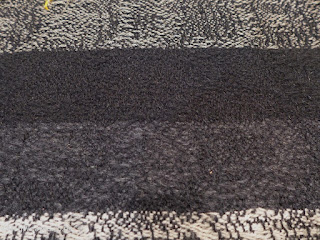 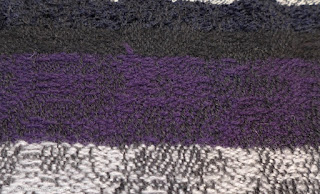 Warp and cashmeres and the last navy wool sheen contrast

3) When I first entertained the idea of silk, I thought of the yellow(D); it has a hint of black, an "old gold" look. I'm undecided on the color combo but like the size. The pale blue(F) is my favorite, and I almost didn't sample because I don't have enough, but the size is perfect and I love the look especially in daylight, so at least the idea was good. The slightly greenish boucle(E) was the nearest color silk I have, but the jury's out; the draft/pattern is surprisingly visible even in spite of the boucle. The darker, grown-up green(C), (and it's not gray nor gray-brown,) I saved for years for a suitable project, and while the color is lovely, it's too thick. (C), (D), and (F) silk wefts are shinier, while the warp stays a somewhat subdued very black black and really recedes.

4) I'm never sure about black+purple(H) but I like black+navy(J), but I don't have a suitable navy not in boucle. I don't like (H), and the sheen of the warp is too close to that of (J), so I don't think I'll go with either.

While I was wet-finishing, I remembered I have black merino in the same size as the red and white wool, from the same source as the warp mohair/merino. I might sample that at the start/end of the first piece. But... None here stands out and the loom is ready to go first thing tomorrow morning.

I don't like black warps, but goodness, in combination with dark wefts? Yikes.

As for Syrie, now that I put my thoughts in words and posted, and Ben's seen what I was up to, I'm drowning in foreboding whatever I make is destined to be mediocre, "a nice effort", and "provincial" in the worse sense. I'm going to walk away from it for a few days, or concentrate on the technical aspect: weave structure, making tiny mock ups, etc
Posted by Meg at 2/27/2018 08:22:00 PM