Hi from the Other Side

Gita on Tuesday for and Nelson City in general was nowhere as traumatic as I envisioned; it arrived later and took a path further south, so we got rain and wind, but the rain wasn't as hard nor long, and the wind was much milder than our usual Sprint/Autumn wind. The one noticeable difference was wind usually blows from the west here, while Gita brought it from the east.

However, the West Coast and Golden Bay, northwest of Nelson, were hammered with heavy rain and landslides. You may have seen pics of Takaka Hill Road having fallen off in big chunks. These, together with State Highway 1 from Picton to Christchurch via. Kaikoura, the route damaged in the Nov 2016 earthquake, are some of the popular tourist routes, (two are also our main arteries,) so if you know anyone hoping to holiday in New Zealand and drive around the South Island, urge them to get updates. Takaka Hill in particular is going to take some time to repair. (The hill is, incidentally, where the marbles for our Parliament House came from, and was used in LOTR films as backdrop for folks running in stunning scenery.)

I'm really fired up about the RAW project, and I'll tell you more when I have a clearer picture, but I need to read up on tied weaves. You know me; reading words about weaving make my eyes water and I read a paragraph several times before I realize I've been reading it many times. (Ditto with my own posts!)

Because it's a big project, I don't want to use pick-up, and I hope to weave with one shuttle at a time. The look of the draft isn't going to be fussy or complicated, but I want to insert/superimpose shapes in distinct colors. I wanted to relearn, in particular, tie-down in twill, not how to draft them, but how they behave/look.

I checked every place conceivable for the workshop sample today to no avail. I also realized I did not save the Pebbles draft, another S&W, which makes me so mad because I always intended to weave a bigger piece based on it. I wove that sample on a table loom, so I made the draft in and worked off a lift plan, and I wished I had posted that at least. Instead, I posted the treadle plan, and the only reason I can think of is I usually save drafts in treadle plan so I did that without thinking. But this one isi nearly useless.

While looking for the missing sample, I came across a woodgrain sample I found particularly attractive, and thought I could modify that for the black Merino Mohair warp. But when I was ready to work on it, I changed my mind and chose to modify the hellebore draft, but for a strange reason; the flowers looked like faces, and the cloth, a bunch of folks who have passed on looking back in a quiet, but not sad, way. And I found it visually terribly appealing. I don't know if I'm going to weave all three or four pieces on this warp in this treadling, but most definitely one, maybe two. 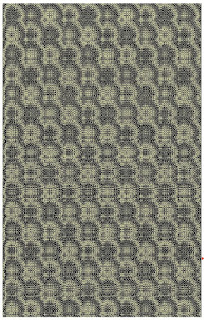 See? I'll have to come up with a more cheerful name/concept, though.

Threading is easy and in one sitting I finished half. The downside is, it's half mohair, and the fiber fly around and make my skin itch and nose stuffy. I remember now why I don't weave with this yarn often, and when I do, usually as the weft. It has a glorious sheen so dull wefts suit best, but I'm also thinking silk.

Tomorrow morning is my fourth session of the Adult Art class; in the afternoon I'm going to show Rosie how I make sauerkraut. So, threading and sampling on Saturday; I hope the loom works.
Posted by Meg at 2/22/2018 10:30:00 PM