Day 4: Mike, Kath and the Parents 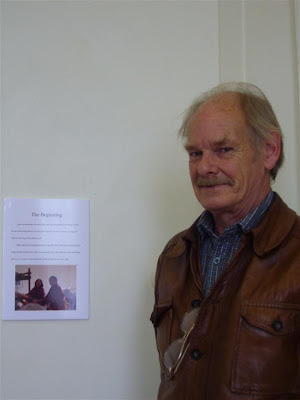 Local spinning wheel maker Mike Keeves was kind enough to pay a visit; my mother met Mike at a NZ Fair somewhere in Japan around 2000 and I've been meaning to visit his place for years. It was nice to hear stories about weavers and spinners in Kyoto Mike knows. 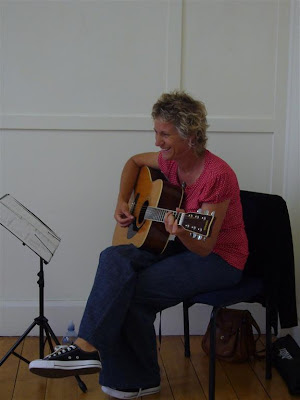 Kath's gig went very well; four pairs of kids and grown-ups and a few other grown-ups enjoyed Kath's original kids' songs as well as grown-up standards. Kath is a really good singer, and she knows how to enthuse children. As one of her passionate fans, though, I really need to learn the lyrics.

I finished a particularly bad warp just before the weavers arrived yesterday, so I needed to put on another one. The tension was funny once again, and knowing my parents had arrived at Nelson and my mother was about 15 minutes away, I was tempted to ring her, but I managed on my own. I normally warp KLIK by myself with relative ease, but being in a different place it felt very strange and the task harder. 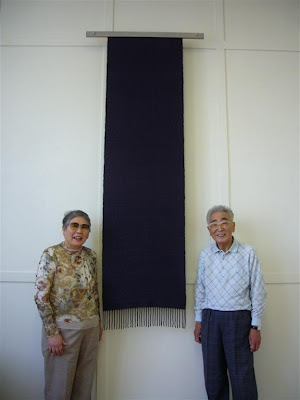 My parents came at a little before 3PM. I hadn't seen them for two years, and exactly a year ago today, Dad had a cancer surgery, ("Stay put, don't come home; it's just a routine procedure," he told me then.) 45 seconds after his arrival, Dad said, "there's a spelling mistake in your blurb."

While I was trying to put things away, an English gentleman asked me if I were the "artist", to which I said, "I'm the weaver." He asked me if my mother still wove, and I just handed him over to Mom, who stood in the doorway and kept talking and wouldn't let the gentleman go. There was a younger woman who came and saw the Exhibit(ion) and started to leave, when Dad told her to get back, have another look and talk to the weaver. Cool suave artist & family, we aren't.

The beautiful Exhibit(ion) is turning into a comedy. I am so tired I am on auto drive.

PS. I am enjoying the gallery space immensely, especially the high ceiling; that's why I don't have the heart to crop any of the pictures with extra space above.
Posted by Meg at 2/01/2007 10:18:00 PM