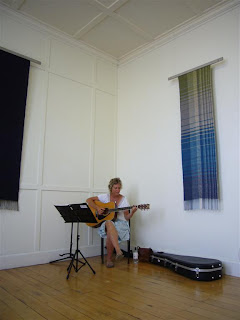 This is my lovely and talented friend Kath Bee. She writes children's songs, and had a CD titled "Dragons Under My Bed" out last year; she has started working on her second CD of original children's songs. She also sings in a duo Zilk, and in a quartet called The Nancies.

The first time I heard Kath sing was last June at the Artists' Retreat; she was singing as Zilk, but also introduced some of her original songs. For a while I wanted to be a children's story writer, but I gave up because, I... grew up. I was impressed with Kath's ability to capture children's emotions and antics that are important to them but seem trivial to adults.

When Dragons came out, she emailed everybody who attended the Retreat, and I bought a CD right away. That's when we officially met. I asked if she would be interested in singing at my Exhibit(ion), thinking could she do it one Thursday during the three weeks, and she generously agreed to do an hour a week for the three weeks.

I love the songs she writes, and the songs she sings. In fact, I'm becoming quite a mad fan of hers. She has a perfect pitch, and when she harmonizes with Liz, her Zilk (get it?) partner, they create quite a dreamy atmosphere.

But Kath is important to me in my weaving,too. She took a big step last year creating the first CD, and announcing it to everybody. She works hard to get school and kindergarten gigs, and continues to write songs. I started planning my Exhibit(ion) probably when she was rehearsing and recording, and I'm looking for outlets and places to show my shawls, while weaving new and different pieces. Because our "emergence" as artists happened around the same time, I can't help thinking of us as babies born around the same time at the maternity unit.

Last Thursday, we had very few people stop by at the gallery, and I possibly embarrassed and chased out a young man who might have come to listen to her rather than to see my Exhibit(ion). Regardless, she kept on singing lovely songs, originals and cover. What a trooper. I felt bad because her time is valuable, but I couldn't help loving the private concert, either. And my experience with this Exhibit(ion) would have been much less colorful if I hadn't met Kath when I did; she's a keeper.

The only problem with her Dragon CD is I can't play it in the gallery while I weave, because I catch myself singing, quite loudly, without knowing most of the lyrics. The least I can do as a loyal fan is to learn the words!!
Posted by Meg at 2/12/2007 09:10:00 PM