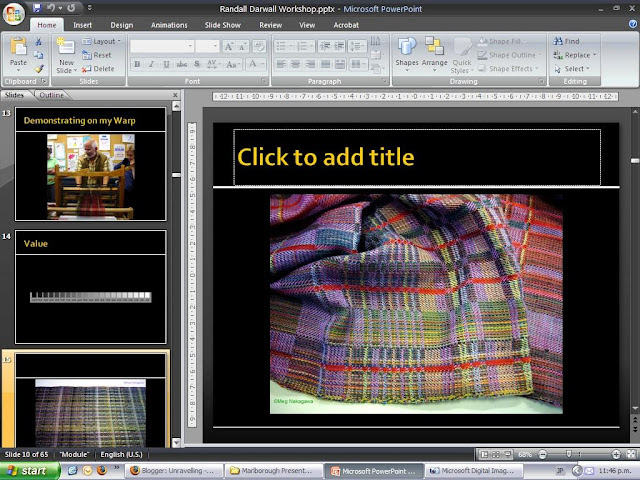 I finished my PowerPoint slide show for the March guild meeting. I'll read and edit some on Wednesday at Sue's gallery, and rehearsal on the afternoon before the presentation, on the 17th, but we checked the laptop/projector compatibility this morning, and I think I've got a good set of slides for an enjoyable presentation. Having said that, it's the first time I've ever done something like this, and the photo slides look inconsistent in tone and format, but I won't worry about that.

According to the CaringBridge site, Randy and Brian went home on Saturday. Though I hate either of them being sick, it was surreal and kind of thrilling to be updated on their wellbeing for one week. To be honest, I'll miss that.

Here's an article on Randy from the Wicked Local Harwich, December 2007. In the article, Randy said he wanted to teach his Ninth Graders weaving because, “It wasn’t representational art which had to look like its subject. It could be free form. It could look like anything.” I never thought of weaving as free form; rather, I've always been mindful of its structural restrictions, and I liked them. This is a new way of thinking.
Posted by Meg at 3/09/2008 11:37:00 PM