AT THE MOMENT I AM A LITTLE CONFUSED AS TO WEATHER THE DOUBLE-WIDTH DRAFT BELOW IS CORRECT OR NOT, AS I HAVE A MINOR DISASTER ON MY HAND.  I WILL GET BACK TO YOU SOON-ISH.

The giftee in question is the little sister of this not-so-wee-any-more boy, and this still-somewhat-wee boy; this is the fourth commission piece for this client, but the last grandchild for now.

This being my first chance to weave something for a wee girl, I wanted to go all out girly and cute, and had in mind something red.  After consultation with the client (a.k.a. Nana), we decided on multiple blue-reds in the warp.  From there, I had to go with a fluffy white merino weft, and after having received several photos of the said cute little giftee, I had to have hearts. This is the draft. 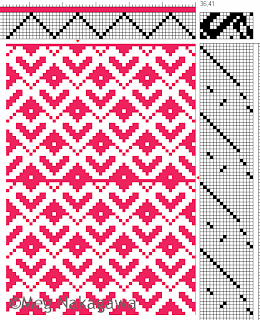 The red horizontal line shows where the second repeat ends; it won't be in the cloth.  The weft is quite thick, so the hearts will be elongated somewhat, but I may have to modify the proportion after sampling.

To convert a draft to a double-width draft, usually I use a tie-up plan.  For the first time, though, I converted a lift plan to another lift plan, (my setup requires a lift plan when I weave anyway,) and this proved to be so much easier and quicker, especially if the design is symmetrical. 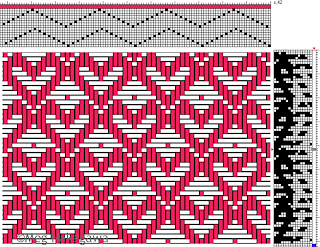