Though I don't Wish to Offend You...

Yesterday was a hellova Friday.

Drawing was great; the day/room slightly cooler, many came lightly clad, we tried to get used to the smaller room, and the model was an experienced one. Ronette Pickering is a persuasive teacher, and together, these three years, we have trained me, (I was born on the year of Dogs,) to blindly obey her instructions, though she thinks I'm a difficult one. I got and Egon Shiele-like drawing, because the model is shaped like that.

During the week I had gone through the gazillion stages of grief, and I was over feeling excited/sad about this term being the last for a while; I told Dot as much in the morning, that I had moved on and was even reluctant to go for nine more weeks.  Now, among other things, I would definitely miss speaking to practicing artists in the class, but the right brain massage, oh!

I had lunch with my guy while musing about models I enjoy drawing, (plumper one, and not-so-young ones,) session where I feel good about my drawings, vs. models and sessions from whom/when I get interesting drawings; they are not the same.

Then we went to the camera shop to buy film and batteries for my old OM-2; I've thinking of old-fashioned photography after the Brian Brake exhibition.  Then I went to the Red Gallery to see Jay and warned her some scarves were forthcoming; I gave myself a due date of next Friday or the following Monday now.

Then I went to the Refinery to a) shoot the breeze with Vicky, b) photograph the light sources and positions in the big gallery, and c) to see Lloyd to tell him I won't be putting anything in Changing Threads but will be available to assist installing if he needs me.  Vicky had a scarf of mine from which a visitor had accidentally torn off the label that needed fixing.  I ran into Duncan with whom I've wanted to catch up for perhaps a couple of years, (not just in passing, that is); we discussed some of my ideas about WYSISYG.  I got to take pictures of the lights in the gallery, and got a glimpse of the "drawing" exhibition opening tonight; it's going to be a mind-blower and I'm really looking forward to going back at a quiet time, and even getting the artist's permission to take photos and post here. Lloyd wasn't there but I scribbled a note and we connected by email.

Then I went to a shop specializing in protective gear, such as vests with light-reflecting strips and steal-toed boots.  It had turned into a gym equipment shop, so I went to the paint show nearby to a) ask where the shop had gone, (that one's gone but there are two similar shops in town,) and b) if they have paints that would do the same, (that technology is so specialized they don't have anything similar in the shop.) Then I went to Spotlight, the big craft material shop and found nothing that would reflect light the way I want, though I found "neon" threads, plastic tube things, and glitter in every format imaginable.  When I left Spotlight, I checked my cell for the time, which was a few minutes after 4PM.

I went to Litter Arty, the used book store with a good art section, and where I accumulate store credit when Steve buys my books, and came out with a promising Van Gogh biography.  Then I went to the Bead Gallery to look for fake-pearls because I've been wanting to use them since I first thought of SSVE in early 2008; I found far too many sizes and colors of Czech glass beads that fit the bill so I'll have to go back with a sample swatch.

Then I went to the local Provincial Museum.  Their current exhibition is about an immigrant boat trip from England to Nelson in, I think, 1851; I felt a bit ho-hum about it but $5 to support a local institution wasn't going to hurt me, so I went. The exhibition itself was OK; the bunk beds, though were the standard single bed width with not so bad (though not great) foam mattresses.  Now every adult knows they were narrower and somewhere I found they were 60cm wide.  I don't like this kind of misrepresentation, because being a visual person, I try to recreate the trip in my head based on what I see and not what I read.  Having said that, they had excerpts from diaries of four of the ship's crew, and the doctors' entries were hilarious.

Example: (And I'm paraphrasing because I can't remember the period parlance:) "Emigrants are distributed food by weight.  They now insist dirt be washed off before vegetables are weighed, or coffee roasted similarly, and make other unbecoming demands."

I came out of the Museum to find I had lost my cell, so I borrowed the phone at Page and Blackmore to ring Ben; went to the veggie shop to buy veggies and be picked up by Ben; we went to all the shops to see if they had found my phone and found most shops closed; went to the supermarket and came home.  I rang all businesses leaving messages about my cell, emailed to those without answer machines, (quite a few businesses, in fact,) and went to have a shower, and whoa, my cell was there, in the bathroom!

So why did I have such a vivid memory of checking it at a little after 4PM?

Anyhoo, relieved, had a snacky dinner, (smoked salmon, cheese, French bread... no wine, though, I was too wound up,) watched four hours of mindless TV, read a little about Japonisme in Western Art, again by Prof Mitsui, (I  haven't forgotten I promised to share more of what he said in the first book I read,) went to sleep.

I woke up at 5AM, couldn't go back to sleep, turned on the TV at 5.30 to find Prez Mubarak had "left", watched until 6.30, gazed at my favorite figure/life drawing book, went back to sleep, and didn't get up until 9.30, which is about the time we try to get into the car to do the airport walk on Saturdays.

And that's just the highlights!  Do you blame me for feeling a little bit out of it?  But it was overall a good day, and I'm pumped with ideas.  There is a floor talk at the Suter this afternoon, (in 75 minutes!) and the drawing exhibition opening at the Refinery.  I'm not sure if we're going, because I don't want to overload my head.  And I need to work on my TinyTiny Collage Challenge. But we are going walking tomorrow morning. 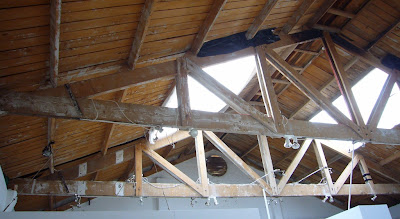 So many new spotlights!