Lovely Joan came over from Blenheim today, and we sent the better part of the afternoon talking about weaving, colors and the Festival.  I can't tell you much about the Festival, because it's still almost 15 months away, but she was pleased with what I have set up to date.  I get overly excited, though, when showing people websites and such and I started talking so fast my mind trips over itself; I have got to stop that.  Suffice it to say, we're going for simple and straight-forward rather than fancy, so even if someone looks at a blog for the very first time, it won't be too confusing. You know I'll show you once they are officially up and running with contents.  For now many pages have "Blah Blah - we can put in this-and-that here" and the like.  Yes, I do type in the words "Blah Blah".

What was fascinating was looking at colors together. 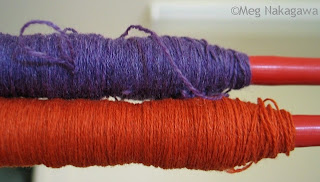 Here are two colors on pirns. 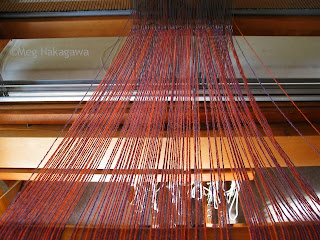 And here they are, same yarns as warps on the loom. Notice how bleached out they both look in the warp?  Honest, it's not just the light.  While I was threading the loom, (and I was so reluctant,) I couldn't stop thinking I had made a terrible mistake combining these two to make a warp.  Theoretically it made sense, and I got some nice results using these colors in the weft of the previous Log Cabin warp, so even though I felt more than a little queezy, I had to soldier on.

I did get some lovely samples, and I probably have more than four here I'd like to see make into scarves. 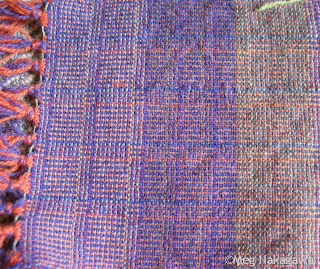 This photo looks washed out, but I wanted to show you how much of the orange you can see; the far left sample, I like the proportion. 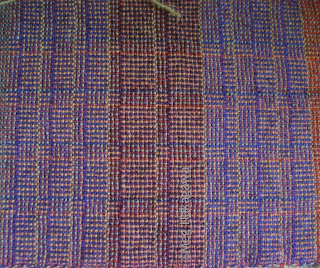 The two blue samples on the sides are fascinating; they look bland and washed out in the sun, but in the dark the shapes just pop out.  I kept closing and opening the curtains for Joan's entertainment. 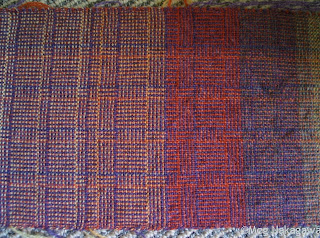 We both liked samples with the same or paler oranges with some kind of a purple; it's the 50's fabric look again, I think. 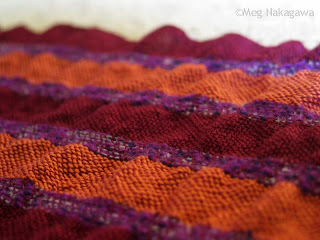 The reason why Joan was the perfect person to discuss this particular warp was because she wove me this piece last year.  When I saw her the last time, wore a lovely crinkly scarf; when I complemented her, she said she'd weave me one and asked me what colors I liked.  Of course I shouted, "Purple and orange".  Just before Christmas, I got in the mail but from what she wrote in the card, I got the feeling she didn't like the color combination.  And today I found out that her orange yarn, too, is actually a more vibrant color on its own.

After the previous red warp, I was reminded how I enjoy working with analogous colors, and I questioned whether I should stick to analogous and weave "pleasing" and approachable accessories, or continue to venture out to new (to me) grounds.  I talked about that with Joan as well, but I was reminded something June McKenzie told me years ago: "Somebody will like it."  So, hooray to all different tastes!

EDIT: I noticed later to my great surprise that I did use two different cones of orange in the warp, and on the pirn is the darker of the two, whereas the majority of the warp is made up of the lighter orange. I apologize; I thought I made a great discovery!
Posted by Meg at 2/03/2011 06:16:00 PM