Has it been a Week Already? 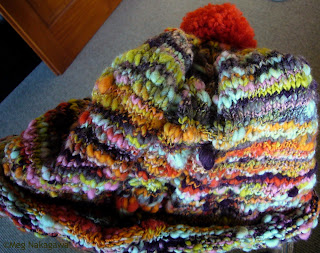 Remember this?  This week, I made one for Ben.  It's wonky-looking, but a slightly better fit than mine and as warm as anything.  I wanted to steam-press to smooth out the fabric, but he likes it this way.  I'm all out of my handspuns but have plenty more sliver, so I am thinking of making a hat for my mother, who really feels the cold in the winter in their old house. 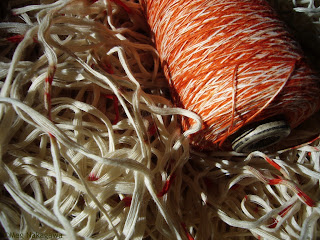 Mom and Dad visited a Kurume Kasuri weaver a couple of months ago, and this week I received these. The noodly-looking stuff is eight-ends of cotton, tied and dyed but never used.  The cotton on the cone is the cotton used as resist; previously dyers used soft cotton which broke easily for the purpose, but recently, Mom was told, they use sturdy cottons for resist.  They feels like those old cottons we used in rugs, When tying the resist, dyers don't cut after each section, but continue on using one long thread, and after the dyeing, they pull on one end and the resist-thread comes, showing the undyed area one after another.

Both these colors fall in the spectrum of color called "Shu" in Japanese, or the lacquer-red, but in the old days when folks referred to the color red, they often referred to these orangy reds. Mom said there were lots of blues, as well as other colors, all chemical-dyed, but observing my recent love of oranges, she went with this combo.  These yarns having a Japanese connection, I'm thinking of plain weave or perhaps Herringbone.  But the cotton on the cone is rather stiff, and I must figure out how to use dyed noodle warp; it's very long, each end is slubby but skinny, and I have to study the position of the dyed bits and consider the placements.

I've been gardening, too.  It's been cooler and the work easier.  I've been trying to get things out of the pots and into the ground, some have waited nearly a decade for this, but I'm not rushing.  Then, the night before last, we had heavy rain, again, and we woke up to the national news that a few families were evacuated down the road due to the rising river, and some highways in and out of Nelson closed or slower speed limits imposed.  Yesterday the sun was out, but overnight it rained again, and the ground is soggy this morning.  This means guilt-free weaving for the next couple of days. 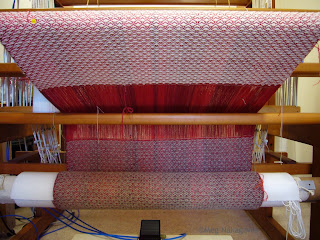 Oh, and the weaving?  Well, I wove about 160cm of the second, gray, Hearts blanket, and instead of making it longer, I started another, (this time, once face on each side!) because it looked like I had enough warp for a third.  I'm seriously mystified now because I think I have enough warp to make this a really long one, OR, shock horror, possibly another piece after this.  I thought I made a 5-meter warp,  enough for two blankets; I'm afraid to go back to my records because it might say I have my standard 8-plus meters.

The second, gray, piece didn't have any tension problems, but the third, white, piece is being naughty,  I've done a few things to remedy this, resulting in the gray piece looking warped.  I must hurry weaving so I can take them off the loom sooner rather than later.  (Such slow weaving, though... Mumble, mumble...)

Just this week, Dot told me about Campaign for Wool, and it was the first I heard of it.  Australia has already started (or finished?) their event, and it looks to me the events in New Zealand is mostly for the industry. Is there anything happening in your area?
Posted by Meg at 5/27/2011 12:56:00 PM