"Art is an Experience."

Ben is said to be an analytical person. I never got that part of him, because he is a bloke, you know, and I'm his wife; he can't find things, he can't turn off lights or close drawers, he doesn't think things through before he enacts on them, and sometimes I have to undo/redo stuff even though I'd asked him to do things my way before he started. As he undoes/redoes things I misdo. But I have always admired his emotional detachment from situations, how he indeed dislikes the deeds and not the person. (Unless they are right-wing politicians.)

Anyhoo, the day I composed the now-infamous-to-myself that post, (you know which one,) we had an emotionally-charged discussion until the wee hours on where we, he, thought the art/craft divide is, clarifying what each of us saw as the Western/Japanese difference, and what kind of art he liked or stayed with him. At one point, he summed up his view thus: "Art is an experience." That without the experience of experiencing an artwork or an exhibition, the artist's effort meant nothing to him, that exhibitions should help visitors to experience artwork, individually or collectively, and a few other poignant points I can't remember any more.

A few weeks later, we had a chance to visit Wellington. (We get roughly one free trip to Wellington for every trip we pay to go to Japan; was well over two trips a while back, but that's life. Sad face.) We went to Wellington City Art Gallery ostensibly to see this exhibition heartily recommended by Claudia, who we trust on most matters implicitly. It was interesting, and we went in two or three times.

But the exhibition I enjoyed more was this one. Artworks were placed all over the building. Eight, I think, of these concept sheets were available; a visitor could pick up one, or only those that interested her/him, or all. 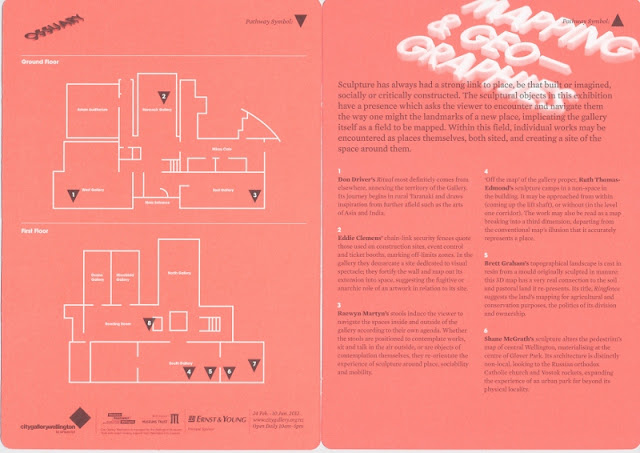 None of the sheets included all artworks; many artworks were listed in multiple sheets. But each concept sheet described at the artworks from different perspectives. So we traversed the gallery back and forth, up and down, several times in search of the artwork in question as we read the sheets, and then returned to revisit the same piece described in a different context. It was like a cross between Treasure Hunt and a school visit to a gallery, where a gallery staff asked you to find such-and-such artwork.I don't think I enjoyed visiting an exhibition so much in a long while. I felt so involved with many of them, and I truly experienced the exhibition.

I carried around the pink-orange concept cards for a couple of weeks afterwards and now I can't find them but they are here somewhere in a sturdy envelope. When I find them, I'll amend this post to tell you the titles for the sheets.

The exhibition was reviewed in New Zealand Listener, but the reviewer doesn't sound very excited so perhaps it's been done before elsewhere, or here; perhaps it's not cool to be so excited in Welly.
Posted by Meg at 6/25/2012 09:00:00 AM