We had another meeting on Monday and the group is officially renamed "Strands"; the title of October exhibition stays "Beginnings". Some admin work on catalogue, promo and scheduling have progressed.

My artist statement to go in our fancy catalogue has passed the muster: "I weave (flat) cloth on looms." Some members go into depth explaining concepts, motivation and/or techniques which make for wonderful read; others are at an earlier stage in planning/thinking. Me, I honestly feel this includes everything I wanted to say, though I have to decide if "flat" stays.

"Pillars"
For a while I couldn't think of good ways to explore the mood I wanted to create by way of pattern/draft. I don't doodle, and when I try my hands tend to make the same marks over and over. Trying out drafts on the computer presupposed (in the way I use the software) I've determined the threading first. Neither felt as if I was approaching this anew. Out of nowhere I started to fold paper and cutting shapes out; think paper snowflakes but the paper folded in one direction only so as to vertically repeat the patterns. Here are a small sample of them. 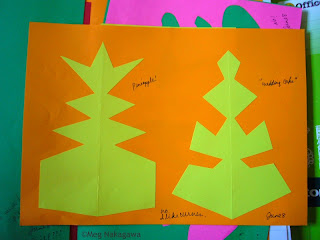 I've had this notion in my head that I must try "bold" which to me meant angular. I didn't like any of them, and didn't try too many. 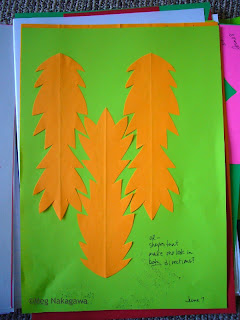 I prefer curvy lines, but I learned that even using curvy lines I can create not so rounded shapes. (These jagged lines are what my hands draw when I try to doodle. I think it originated in trying to draw leaves.) 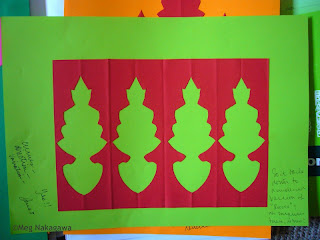 I wasn't sure if I wanted to stagger the motifs, so if all lined up together, they would look like this. 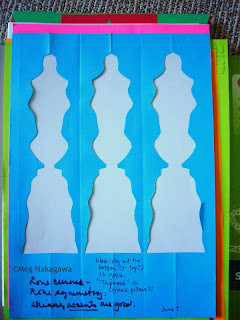 Which brought me back to the very first piece cut out, based on the shape of a chair's legs. Varied, "architectural", curvy but not rounded. Coincidentally, the relative lack of contrast of the blue and the gray is closer to what I will get from the combination of yarns selected; this could be a good omen; this is the direction I'd like to go.

As regards weave structure, after the complexity of the expression I got from the networked twills in the last cotton lot, I decided not even to bother sampling others and go with networked twills. For one thing, a two-shuttle weave in this case is, well, insane. For another, with a simple twill tie-up, it's a cinch to modify and create "darker" and "lighter" versions. (Neither the width of the cloth nor the "design" can easily be made thinner towards the top as easily, i.e. I can't be bothered, so I'm making the value lighter.) 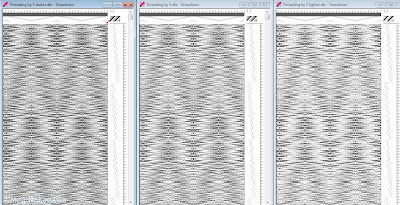 So now, all I need is a draft, but that's easier said than done.

Collaborative Book/"Friends(hip)"
Ronnie suggested at an early stage the notion of "self-portrait" for our individual pieces to go into a collaborative book, and Jo, I think, found in her notes the phrase, "an expression of self". So I've been breezily, (that is, without turning all serious,) considering self-portraits. I've no specific progress here, but if I'm going to make a self-portrait, the "Friends(hip)" piece has to relate to it; it's one of those things I knew and don't have to bother examining. So my plan is to create a colorful interesting piece depicting me on 13 or 14 shafts for the collaborative book. Then, to modify that draft to make it double weave, so on one side of the "Friends(hip)" piece, you can see my self-portrait-based cloth but with bits of your yarns showing though in the weft; from the other side, it's a tapestry-like piece with your yarns creating a simple shape. I'd love a circle or a ring/doughnut, but there is such a variety of width in your yarns and I have no idea how the self-portrait side will be affected, so I'm thinking a rectangle or an angled ring may be more easily achievable. Sane. A two-sided wall-hanging in double weave.

I will have to practice this a whole lot before moving on to the exhibition piece, since I've never tried double weave outside a workshop, except for double width, but I don't think this piece is going to be that big, so fingers crossed.

"Tube"/"Tent"
On a typical wet-duck moment, I decided I wanted to exhibit a pretty, flat cloth. The stronger I felt this, the less inclined I became to weave a "Tube" just so people can walk into my cloth. I returned to my mind map of what cloths do. Seeing Megg also reminded  me of some of the ideas I had when Megg and I were hoping to have a joint exhibition, where among others I had an idea of a simple tent; just long lengths of cloth hung like a tent but now sewn. Both these ideas are on the back burner now as I'd rather make few nice pieces than many suspect ones.

"Father, Professor, Patient"
Not gonna happen. I won't say "never",  but it's been taken off the burner now.

Small Items to Sell
I would like to weave at least one warp of scarves to look like smaller versions of "Pillars" or longer versions of the self-portrait, but realistically, cards made of photos of my pieces may be all I can manage.

And...
Heaven forbid I should come up with a non-weaving idea, but I'm so taken by the thought of clothing being the original purpose of weaving that I have been playing with the idea of buying fabric to make something in 3D; body shapes, relics/artifacts, and the like. The problem is, I don't know if clothing was really the original purpose, and this is entirely an unknown territory I've no idea what's involved.
Posted by Meg at 6/24/2012 02:02:00 PM

Email ThisBlogThis!Share to TwitterShare to FacebookShare to Pinterest
Labels: from Group R to Strands, from WYSIWYG to Beginnings 2012