Because Ben hadn't taken enough leave this year, he had planned to have this week off and we looked forward to a little downtime, gardening, walking, café-ing, perhaps the Italian Cinema Fest in town. But until yesterday, Day 9 of his strange cold/sinus problem, he was a zombie. Now that he's on the mend, I'm a bit crook. The weather has been lovely for the aforementioned activities, but all we've done have been to get a car warranted, (a semi-annual requirement); Ben went to see a doc and got a script for antibiotics which he probably won't need; and butcher-, veg- and fish-shopping. It's already midday Wednesday. What bothers me is I can't tell if mine is a cold or a weird/new bad hay fever.

I have been weaving a little, on the strange hot pink cotton in the previous post, sett unchanged. I'm using smaller geometric drafts downloaded from Handweaving.net, the first piece being the two-triangles-making-diamonds in the middle, the second probably the first/far right, which looks totally different on the two sides and which I turned sideways.  I love the drafts with long floats, but this thread feels so coarse when allowed to float, so I the finer drafts work better. I love the ropy draft third from the right, but its B-side is muddled and unattractive in this thread combination, so no go this time.

I've been thinking about complicated drafts and blocks again for the next cashmere warp, and bang, have a look at this by Zeni; so beautiful, so subtle, so sophisticated, so attractive, utterly desirable because of its deceptive simplicity. Friends who know me in person laugh when I say my first preference is achromatic/analogous; it's true I do weave a lot of colorful stuff because that's what sells around here and what the galleries request. After I clear my backlog, though, I am hoping for a color strike, a bit of a analogous blitz.

I'm continuing to simplify my online life; I've been working on this and my Japanese blogs; there will be some cosmetic changes as I learn to navigate the new Blogger editor, but nothing fundamental. I apologize in advance if the process gets bumpy for you. 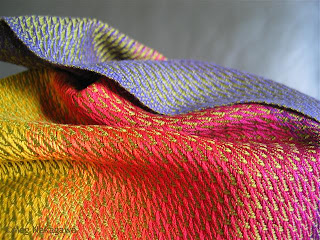 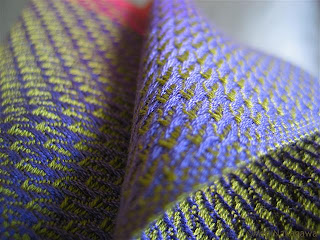 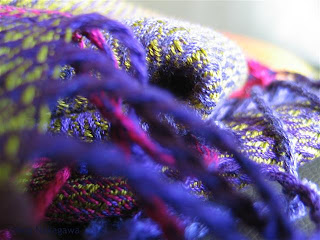 EDIT: We came to New Zealand to live 18 years ago today. Forgot about that while flipping from one website to another all day chasing the election results.
Posted by Meg at 11/07/2012 12:40:00 PM