Or, "Oh, What a Difference a Day Makes"? 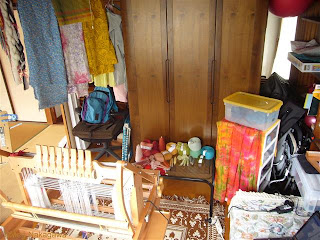 This picture cracks me up because it looks like millions I've seen of the "you wouldn't believe how the Japanese live (in small spaces)" genre.  My parents' house is no mansion, but it's by no measure tiny. Before I got married and left Dad and Mom didn't accumulate stuff so the house had plenty of space even while accommodating five, but things sure changed since, with my parents' travel mementos and Mom being too busy/lazy (her words) for her kind of clean-up-toss-out sessions, and that's discounting all the fabric and knitting yarns she always had, plus her spinning and weaving stuff which also started the year I left.

Mom finished weaving her piece yesterday morning so immediately we moved the wider Ashford-8-shaft-with-legs (and bench) into my wee room, moved her stash into her workshop, and did a bit of reorganizing our weaving situations. I no longer have any excuses for not, errrr, weaving.

Except a cousin I hadn't seen in over 40 years came to visit in the afternoon,and we talked and talked and talked. She's five years my senior and, like my sister, is the gentle, subtle kind. She didn't have an easy early life, and seemed to almost want to blend into the background any time my rambunctious extended family on Mom's side gathered. But she was always there, and she's probably kept in touch with Mom the most diligently. In the 40 years I hadn't seen her, she went to art school, married, had a long career in marketing in the food industry, raised one son, and now has two grandkids. She's also dabbled in crafts including weaving, (she has a Glimakra because in the first instance she fell in love with the loom as an object while an aspiring interior designer, LOL!) and has throughly studied the region discovering good restaurants, cake shops, even where to buy tea leaves of various kinds. (Very quickly she recommended us nine places of interest near our or my sister's place.)

And she's the one who made a giant breakthrough with Mom's psyche. She brought us lovely packed lunch, (o-bento) and some yummy cakes, and muscat-grape-scented tea leaves. And grandkids' pictures. It was all normal fun and reminiscence while my cousin was here, but over the course of the evening Mom started to feel her gentle kindness seep into her system, (via the matching of the special cakes and the tea,) and rekindle Mom's sense of taking great pleasure in small lovelinesses. Mom, for most of her life, was a greedy collector of small lovelinesses and people's goodnesses and precious moments, and this all came back to her, not in a tidal wave, but in a gentle, quiet way just like my cousin.

How wonderful, and how perfect that it was this cousin who brought her such joy!! I've been telling Mom, yes, telling her in as succinct words as I could muster, that she was never a nay-sayer by nature, and my sister has been waiting for Mom to pick up her pace to return to normal, but neither of us had gotten through until this cousin, knowingly or unknowingly, approached Mom. Too boot, she doesn't live that far away, drives, is retired, and her hubby is working overseas at the moment. And her son lives near my sister. So Mom has plenty of reasons to soak up more of her loveliness. A perfect un-storm!!

I'm a bossy person by nature and have been bossing Mom around, partly because she's been at a loss, in part, since Dad's death and someone had to keep her moving forward and more importantly get some of the practical things out of the way. And so far it's not been a bad combo, but as she recovers, I really have to back off some, which may prove to be, you know, a bit difficult.

This afternoon four guys from Dad's postgrad days are coming. We used to think Dad had too few friends outside work, but not the case. At all. And the number of visitors, the things they tell Mom, and the letters we have been receiving gives us a lot bigger and much warmer picture of Dad than a scary dad.

Yay, Dad!! (Wished I knew a fraction of this before you exited the stage.)

I've been approached by Eiko Travaglini to meet up while she's in Japan. Eiko-san is a Tuesday Weaver, seen in the second-row, left pic, (is that the right way to describe which pic??) second from the right in the black top. So a plan emerged and we, including Mom if she feels like it, are going to have lunch near Yokohama station next week. We get to meet another weaver!