The cotton warp is done. I like Triona's piece; it looks different in different lights, but I particularly like it when the blue designs lifts off the background like danging earrings. The selvedge is problematic, and my hemming technique has much to be desired, though. (I'll post a bigger pic after she's received the piece.) 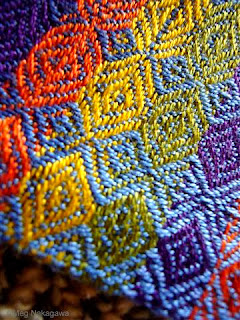 I don't like my fabric for my project. I chose the weft color because I liked it in the sample (bottom, below), and used the twill draft because I made it but hadn't used it and expected it to weave quickly and easily; it turned out to be excruciatingly boring and the weft makes the cloth looks dark and in disharmony. I should have gone with the squary draft. But stay tuned for the project. 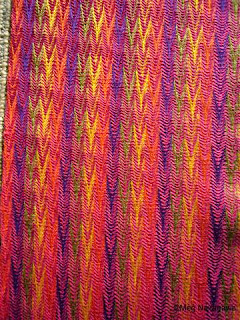 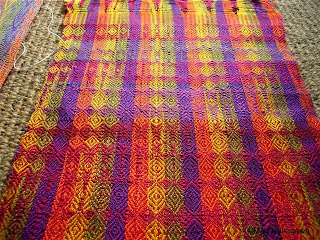 Some time ago my yarn source asked me to sample a yarn, and I did this at the end of this warp. As control sample, I did a bit of the twill with the same 2/20 in white. And look! Christmasy!! 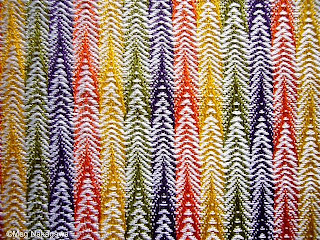 So it wasn't all a waste.

This is a silk scarf from Myanmar Mom bought me in Japan some years ago; she knew I'd go goo goo gah gah over the grays. And of course I have. 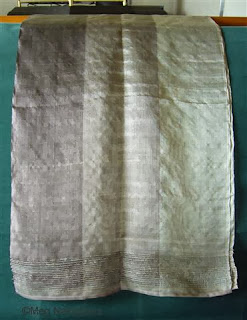 For many moons I've looked at cotton like these, 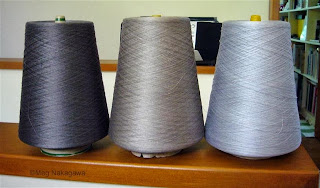 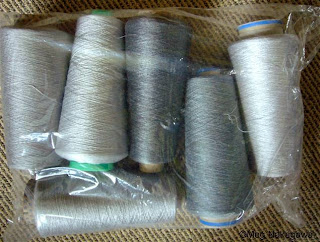 So imagine my surprise, when I found myself making this warp as the first inspired by the scarf. Doni's cashmere glided onto the warp beam; so smooth, so lovely. And in case you can't tell, (weird weather today,) it's half red-and-orange, and half red-and-pink, and the red came from two dye lots so are ever-so-slightly different. I'm using a subset of the Pillars drafts for two pieces from this warp; at least that's the plan at the moment. 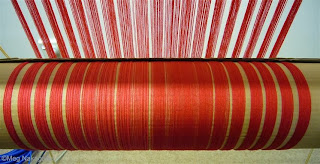