Sampling is the Best Part

I don't think I've ever sampled 30+ wefts for one warp, though you know, I might have; this project was becoming a color conundrum, but I think I've reached a decision. These samples include yarns I don't have enough of to weave a whole piece, so some of the best-suited wefts are not available, but I'm thinking of one of the darker reds (a) for the longer draft and one of the greeny indigos (b) for the rounder draft. After a little more tweaking of the drafts.

One color I really liked was the glittering orange silk (c) but that's a stiff thread and the resultant cloth cancels out the softness of the cashmere-mix warp, so I have a different plan for this thread. 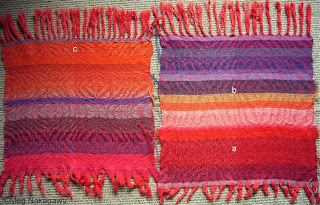 One of the difficulties with this warp was that the two sides look so different in different lights. To recap, one half consists of Red(dark)+Orange, while Red(light)+Pink makes up the other, the two reds being the same color but from different dye lots. The Red(dark) and the Orange are close in value but ever-so-slightly different in hue; I think the Red(light) and the pink are darned close in hue but quite different in value.

In brighter sun or under florescent lights, the R+O half is wonderfully saturated and yummy while the R+P half looks slightly faded, but in the evenings or when cloudy, the R+P half is ever so nuanced and rich and interesting while the R+O side looks too straight-forward. I hope my weft choices will look interesting all around, but they also feel like the two least bad ones.

It rained a little yesterday. Though other Nelsonians may tell you we have had rain over the last several weeks, they lasted between 10 seconds and 20 minutes, followed by hours and days of strong wind, so we needed prolonged and not-torrential rain for the soil. This morning we have had mist descending, in between bright sun, Unfortunately, in other parts of the country, we had floods! Watching the recap of 2013 in the news last night, I learned New Zealand had at least as dramatic and extreme weather as Japan this year. As I know many of you did. Nelson appeared twice in the short footage.

Sister just texted me to say she's going to Mom's to dismantle and pack the looms. It would have been me taking pics and marking all the pieces and Ben taking them apart and packing if we were there. She's keeping as much weaving equipment and yarns as possible, and definitely all the books.

In between their busy family lives, Sister and Brother have been spectacular helping Mom prepare for her move and she's been the envy of her friends. May 10 next year would have marked our 44th anniversary at that family home, but she's moving in less than two week, four months short of the anniversary. So while everybody is feeling the rush, I'm the only one feeling a sad and sentimental about all the changes, even though I lived in that house for the shortest time, about 13 years, I didn't particularly like the train line it was on, nor, really, the house itself. I just like being home especially when the rest of the troop were all there.
Posted by Meg at 12/30/2013 01:31:00 PM