I weave ever so little of River of Fire every day; today I managed 42cm but it might have been too much; I need another 34cm or so, and then there is about a meter left of the warp to make a warp end swatch.

I monoprint on Fridays. Catherine said there is a certain anger in my work; Maureen said my women have attitude. I like monoprint because there is a point-of-no-return beyond which I can't change anything, and I never know how it's going to turn out until I put it though the press. Sadly this week is the last session for this year, but Ronette is teaching a week-long workshop at the end of January, where we get to draw from 9AM to 4PM. I'm already signed up. 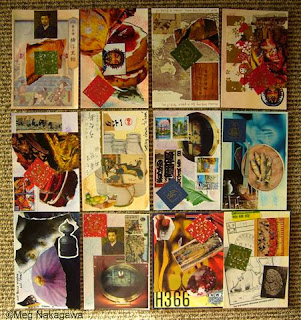 I've done some collage postcards; I've also started my W2W2 envelopes and my Sketchbook Project sketchbook, but I have not started on my tax returns. 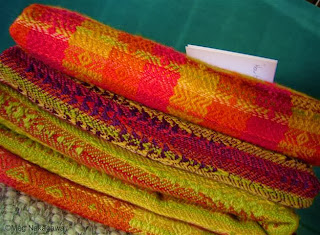 These are becoming a bit of an albatross, for reasons I shall tell you soon. I also had another great idea, but I didn't act on it when I should have. I feel indecisive, or slack, or lame.

My sleeping patterns has been totally out of whack; I go to sleep between 10.30 and 11.30PM, read but can't fall asleep, and I'm up again between 2 and 4AM until the birds start chirping, which is around 5AM these days. And then every fortnight or so, I can't seem to wake up and want to sleep, sleep, sleep. Some weekends, I do just that.

I'm overwhelmed by the mess that is our garden and house. I'm a little overwhelmed by my stash; that's the yarns, art supplies, and the notebooks I've accumulated without my realizing how many I accumulated. The problem is, I haven't used notebooks for several years at the rate I used to; I just use any scrap paper lying around instead.

We have been eating well, though, and without my trying much of anything, I lost a tiny bit of weight in the last year. It's not the regular fluctuation I've always experienced, but a noticeable, in numbers, reduction from my maximum weight I maintained since 1995. So that's good. I wished I could tell where I lost the kilos from, that it's not my scale being out of whack. I've been slack with exercises, but Ben's been doing so well on his machine, every single night, like right now. 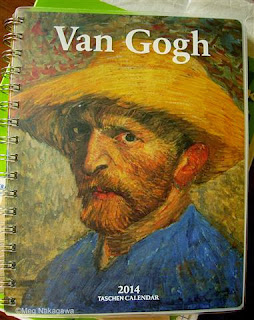 From time to time I've thought of keeping a diary but felt this blog doubles as my diary so I'll most probably be saying the same things in two places. I kept a diary from time to time when I was very young, but I got bored because nothing exciting ever happened in my life, unlike in the books and the films.

But I'm desperate for something to happen next year; perhaps a discovery that I know something, a new direction in my work. Something. I keep repeating the phrase, "I have high hopes for next year," but I'm not sure if it's more the case of desperation. So I bought this and hope to keep my thought for one year. There's room for only four or five lines each day, so I should be able to manage.

My parents' house sold; now Brother and Mom have to find Mom an apartment, preferably very near Brother and she has to move by the end of February. I told her I can be there during Feb if she needed me, but so far she's declined; we both think it'd probably easier if she just hired help and did things her way; I get that.