There is So Much Dr Who on the Telly, It Must be Christmas!

This spring/summer has been windy, but Christmas Day was an Oz-and-Back-Again doozy. I made two pillow cases for Ben's new super-sized, high-tech foam pillow out of an old flannel sheet; I have goodflannelphilia and severe misobadflannelpathy. Buoyed by getting two more or less rectangular bags using the selvedges to maximum advantage, I sorted my large-but-not-unreasonable fabric stash dreaming up other possible sewing projects. Brave. Even daring.

But since the Sketchbook Project sketchbook needs posting no later than January 15, I think I'll work on that today. Unless Ben wants to go tease the Boxing Day sales in town. We need a king-size duvet cover; we got one last week, until I noticed I was trying to put a freshly-laundered queen-size cover on a king-size blanket; though our bed is queen, we've always had two king blankets, no queens, so I don't know what came over me, but this kind of mistake/confusion makes me feel terribly old and stupid.

Today would have been my parents' 58th anniversary. Dad was the hopeless romantic; Mom ever the pragmatist. Mom put up a lot with Dad's idiosyncrasies, he demanded much in his last two decades, but I always thought Dad loved Mom more. I should have said so to him. I understood Dad perhaps very well because we were so alike, but I didn't tell him because I thought he knew. Even if he did, I think it would have been nice for me to say and for him to hear, as it would have been vice versa.

Hear me up there? 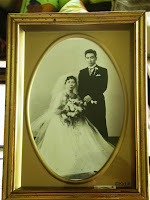