There was an un-tiny earthquake on the North Island yesterday. Unrelated to that, there was a gas leak from a boat in a North Island port and the entire port was closed down. And we're having a tail end of one Cyclone June descend on the entire North Island and some of South. New Zealand may be small, but we're not short of excitement. We can laugh because so far the only casualty has been the big bird at Wellington Airport. Have you seen the pic? Not very magical. 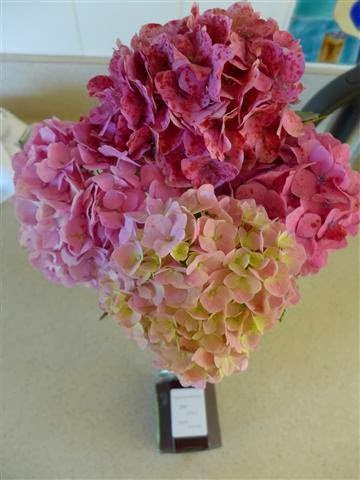 I was so encouraged by the lovely hydrangeas Annie brought me on Friday I went outside to, urrr... weed my flowerpots on Saturday. (Is there anyone else in this galaxy that needs to weed their flower pots??) 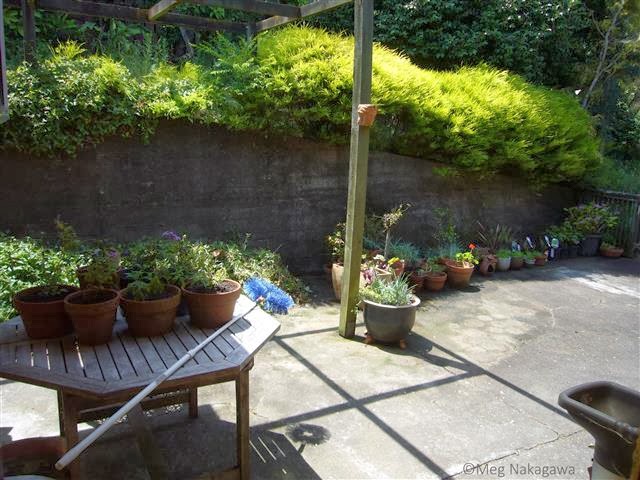 I pushed all the pots against the retaining wall because we got delivery of a truckload of firewood by Phil the Canadian, and it has to be carried from the side of the garage, across the driveway, up the stairs, across the patio, and all the way to the covered part of the patio on the far far left.

Also, this year the cobwebs has been so bad our house looked like one decorated by overzealous teenagers for Halloween, so I got my blue cobweb brush out. It's not a task I enjoy, but worse is cleaning the brush itself; thank goodness for the high-powered nozzle!

In an unprecedented move to focus on the good things here on Unravelling, my heliotropes are doing fine and I put the dark ones, (love their look,) on the back and the pale ones, (they smell divine,) in the front on the table so we get a good whiff when we open the front door when the sun is out. 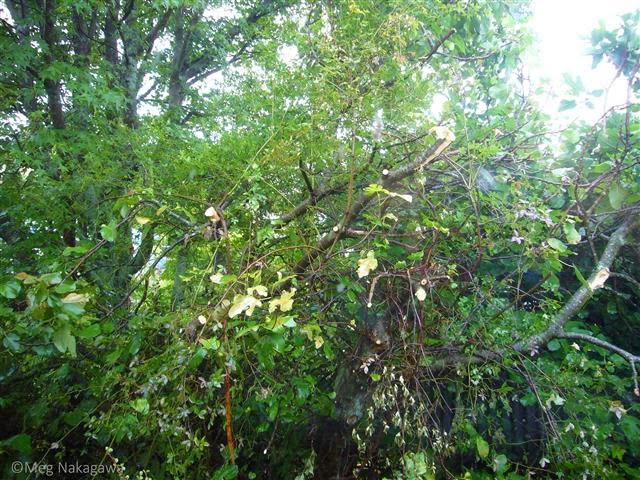 The hacked fig tree, however, continues to look a bit sad. We'll get proper tree cutters to go around the property and trim overgrown trees probably in the early winter. After we have done our bits to clean the place. Yikes.

Broken eye glasses have slowed me down; by about this time of the afternoon my eyes and head get tired. Ben has to re-tape the sides every morning, but may I say, if you ever have to mend eyeglasses, I recommend masking tape over cellotape! They stay put better and come off easily-er. But I'm determined to finish my tax work this week. At least get started this afternoon.

Kaz and I thought it might be interesting to have a "soft" study group so I set up a Flickr group called "Weavers and Designers". It came about organically, as you know; me (or should it be I?) finally finding a used "basic design", then a few others buying it as well. The group starts with "weavers" because Kaz and I are that, but it's open to everybody. We work at our own pace, etc, etc. It's all here. (The same info appears twice because of the Flickr group setup option. Soreeee.) This situation has been lightly improved.


I put it on Flickr so we don't have to write chapter and verse every time but just share casually, but still use the Discussion part if we want to talk or ask questions. Also because many of you already have an account, and a good compromise for users of different blog platforms and those not on Facebook.

As for me, I'll have to finish my taxes first, and as we all know I'm slow at everything but I hope to get that ball rolling come February. We're giving it a go until the end of 2014, and see how the future looks. Right now we're making it up as we go.

You're all most welcome to join us.

EDIT: A reminder that Better World Books, among other places, specializes in old textbooks and posts free to anywhere in the world. If you live in the US, for e.g., Amazon has it for less $, though.
Posted by Meg at 1/21/2014 01:54:00 PM