Or, "aye"; there have been some discussions on how we should spell that little tail Kiwis and Canadians add at the end of conversational sentences. We even use it as a complete sentence to mean, "Pardon?", "You're kidding!", or "Surely, you agree!!", depending on the accent.

Far more intriguing for us has been "ne", used in both Maori and Japanese, in the same vein as "eh" but a little stronger solicitation of agreement/common understanding, perhaps. The two languages are not related, but the sound systems are similar, so there are a lot of words that sound the same but mean different things. (Can I call them homonyms if they come from different languages?) "Kai" is seashells in Japanese, food in Maori, for e.g. But "ne" is used in the identical way.

Two paragraphs to explain my title; I do miss the name of my late blog, "Not a Woman of Few Words", but not blogging about my one life in two different places.

The good news is the eyeglass frame arrived at the optometrist this morning; four weeks and one day instead of two weeks for tiny pieces of metals. They said I can expect my glasses on Friday, but I have my money on Monday. The bad news is Ronette's figure drawing resumes this Friday morning, and though I'm less worried about looking geeky with masking-taped glasses, I get very tired concentrating on looking at anything for too long. I'm going to be exhausted. She has to let me draw on big A1 sheets.

I hadn't realized how sedentary my life had become in this time. I knew it took me much longer to do anything, even regular housework, because I move slowly to prevent tripping or knocking things. Yesterday I started making the gray warp, (amazing how much of that I do by feel; the only time I looked was when I counted,) and about 3/4 of half a warp though, my back started aching and back upper leg muscles tightening. How lame is that?

This is a new-to-me yarn, (and from memory, mill-ends my regular source got hold of; it's not on their regular menu,) 2/72, 18.2 micron merino, in gray and navy blue. I've admire and touched these cones for some years but being much finer than any other wool I've handled, I was scared to work with them. The gray felt a bit dusty and itchy while I measured the warp, (almost as if it has a bit of mohair in it,) but this morning, the relaxed warp chain is luxuriously soft and has that wet Meirno feeling I like.

I've been sick of working so I started making my standard 8m warp. I had a terrible time winding it around a ruler and counting, (so darn fine and delicate!), and after three tires, I got an average of 42EPI for plain weave. But while actually winding the yarn around the pegs on the board, I knew this wasn't anywhere close enough, this yarn felt and looked much skinnier than my 2/20 cottons which I weave at 42. I dunk a short length of both in warm water and left to dry and at least in that crudest of tests the cotton fluffed up much better than the merino, so switched to 48EPI. And the more I handled the yarn, the wider the piece in my mind became, so I decided 24 inches/roughly 60cm on the loom, 1152 ends. Even if I change the sett, I will get pieces between 55-65cm wide. I think it's going to be some kind of a swirly advancing/retreating twill threading but I have too many ideas for the weft. 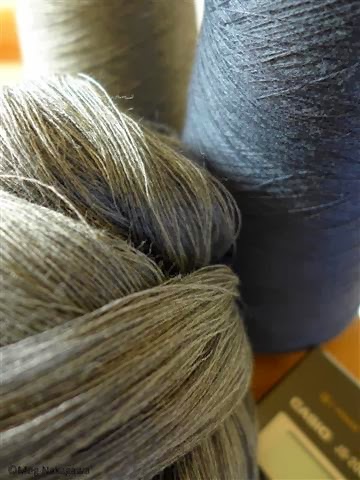 On, in the middle of this operation, my beloved calculator finally gave out after 23 years; the numbers can be seen at a strangest angle and only sporadically.

After we put some of the junk that usually sits at the head of our bed, I wasn't sure if the cloth I showed you yesterday needed to be lengthened, so I'm sleeping some more on that. But I remembered something this morning that I knew last week but forgotten over the weekend; the lower pair of clips where the bottom dowel is supposed to clip on if I wanted to "open" the shade might be too high for me to reach.

I slept through the night without waking up once last night, a first in, oh, I don't remember how long. I was stunned when the clock radio woke me up; refreshed, not tired, and stunned. Like it was the first time I ever woke up. The aforementioned exercise plus the shower at the end of the day rather than one in the morning must have tired me enough and relaxed me. It's a no brainer, but I forget this too often; exercise by weaving and a shower late in the day is my normal life, but I hadn't done it amidst the Sketchbook Project/tax/glasses hoo-hah.