Spoiled by Good Merino and Cashmere

Antonio Carluccio always emphasizes, "good olive oil", which is how I feel about my best yarns. 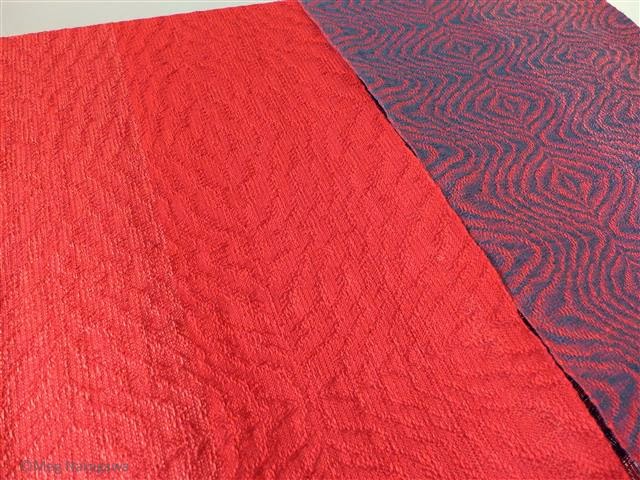 I finished the red warp yesterday; the red piece is lovely, "typically yours," according to Ben. The teal piece that looks silvery in some light, well, it is warped because of the tension problem and has somewhere between two and 2000 broken warps to mend. It would have been a lovely piece for the galleries, but since I decided it's going to be mine, I wanted at least 150cm in length, (minimum around 175cm for merchandises,) and the last 20cm was really hard going, but it's off the loom.

I can't figure out why the first piece had lovely tension, and wove smoothly (in three or four days,) at 24EPI, while the second was a nightmare; both have longish floats sandwiching plain weave areas in about the same proportion. I'm too cross at the moment to figure this out but I need to as I'd like to weave with this heavenly Merino/Silk/Cashmere. 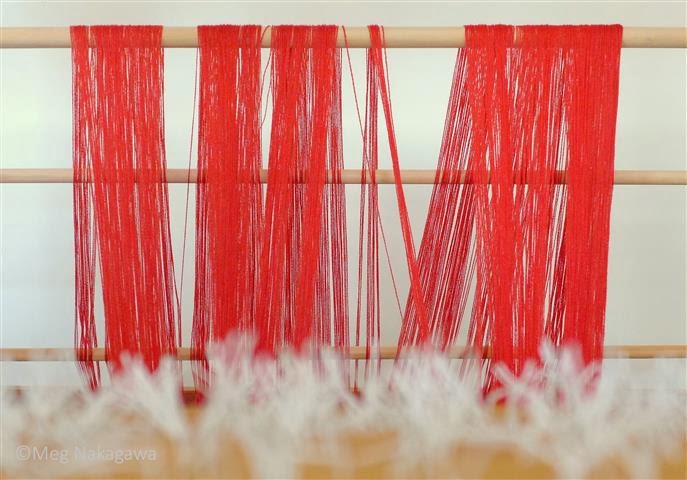 This is me getting right back on the horse; same yarn but in two reds only; 420 ends, 4.25 meter, at 21EPI, I think. I'm going to rework my pillar drafts again, but I feel a little anxious proceeding without investigating why the two pieces in the previous warp behaved so differently.

Earlier in the week I wanted to weave but not tackle the sensitive warp, so I sampled the other red wool on the 4-shaft foot loom. I used to love this series of yarns; unusual for New Zealand back then, they came in gazillion colors, but too hard and scratchy for my liking as scarves and shawls. I wove about four long warps as practice and then when I was ready to start submitting to exhibitions and work on commission pieces, I switched to good merinos and possum/silk/merinos. But this yarn weaves reliable old-fashioned wool fabric, and I wanted to make some to sew later. Realizing this is a narrow warp, (six inches,) I thought perhaps I could get three tiny scarves instead using good yarns in the weft. I sampled in the weft the same wool, some other wools including bouclé, cashmere and the possum/silk/merino, but nothing worked. 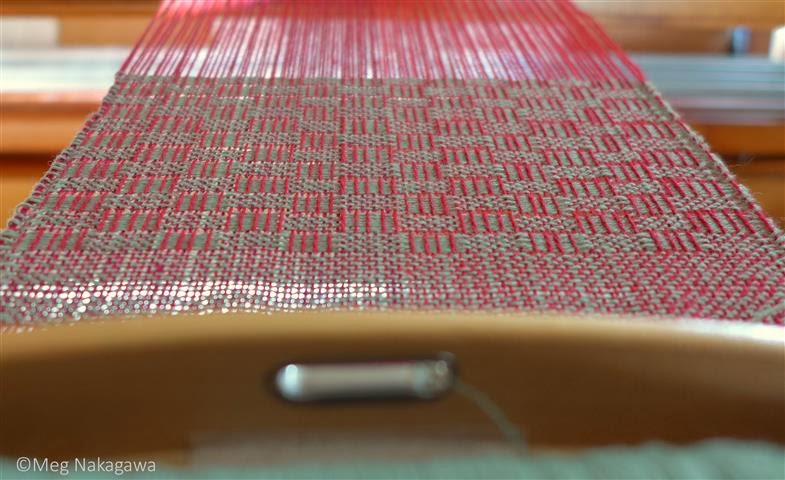 Still undeterred, I started, twice, a scarf with cashmere weft, but I know it won't feel lovely and I'm having problems readjusting to the foot loom and getting good selvages. I'm stopping stop this silliness and weave a long fabric for such thing as... phone/camera/sunglass/pencil cases using weft from the same series.

It's been interesting getting reacquaint with my foot loom. I can develop a rhythm to the point I don't think of the treadling, (lovely!) but then sometimes my consciousness travels to imaginary places and when I return to earth I have to count the picks and sometimes unpick. With the computer-controlled, I can never develop a rhythm as I'm relying on the air compressor and the pumping mechanism, but I can drift away. Until the computer crashes, which it does once in a purple-orange moon. Then Armageddon ensues.

I'm finding weaving a six-inch wide warp difficult. I used to do mostly six inches and nearly-30 inches interchangeably, but lately I find somewhere between eight 25 easy to weave; that is, easy on the body. In future, when I want to weave very narrow pieces, I would be best doing this on the smaller table looms, I suspect.

I was watching a doco that had something to do with 1955, and the narrator said, "almost 60 years ago." I was born a few years after 1955, so I thought they had it wrong or I heard it wrong as 1955 cannot possibly be almost 60 years ago. Then, yesterday morning, the radio was saying something about 50 years and Muhammad Ali and I kept wondering how old he would have been in 1954 until Ben corrected  me.

I've always been ahead of  my chronological age; I stopped growing lengthwise when I was 10; my monthly visitor came and left very earlier; I had my first multi-focal lenses long before any friends of my age. That I'm overweight and don't like exercising don't help, and I get unduly influenced by older friend's health complaints; not quite a hypochondriac, but I spend much too much time bracing myself for the inevitable. Instead of exercizing.

This is how this round of coveting-a-leaner-meaner-loom resurfaced; it's in large part my curiosity about how a purpose-built computer-controlled loom works in terms of the weaver advancing the warp, the mechanism, the timing, the ergonomics. And while I'm upgrading, why not more shafts, right?

It won't last because looking back at my Dad's life I, too, prefer to go places and do things rather than buy stuff. And I've whittled away what Dad had given me over the years towards a new loom in workshops, exhibitions, and travels.

Oh, talk about "wasting" money, this is why I feel I have good reasons to worry about my mind: after I got the latest pair of glasses, they fixed my old pair's hinge for a nominal fee to keep as a backup. When I got it back, I look for a case, and I found two pairs of glasses I had completely forgotten about. I don't know how I convinced myself I did not have backup glasses for at least five years when I did, and since my prescriptions haven't changed much, in short, I didn't need to get a new pair but only the darned hinge fixed.

I know I keep saying I hate getting old, and it's true, but it's not going to get better, or I don't have to worry about it when it stops. So the sooner I get over myself, the better.

So, onwards to the looms.

Yesterday my older nephew, (my parents' first grandkid) turned 18; though I thought it was happening on Friday, my brother transferred the old house's ownership to the developers. I get that old folks have problems with changes; goodness, I am getting to be an old folk now.
Posted by Meg at 2/27/2014 10:19:00 AM