I've been annoyed/bothered/irked by the current eyeglass situation. Because of my special needs, (very bad eyesight requiring thick lenses, even with the latest technology, and more crucially, wide and flat face, almost no bridge of the nose, even for a Japanese,) I have to be patient; my new frames has to come from Austria, which was supposed to take two weeks, but as of last Thursday, two weeks and one day after the order was placed, it still hadn't arrived at Nelson. This next week, Monday and Thursday are public holidays, so I am ever hopeful but if I don't get them before Feb 10, c'est la vie.

It's nice, though, that Ben is home a lot and we can do things together. Perhaps a trip to the nearby beach to take photos. Or cooking up a delicious meal.

Still, I live in this murky world of the too-bright sun, constant squinting, and trying to keep my right eye shut as that is the lens that is so out of whack. It's not conducive to much activity, weaving and gardening least of all, so I have done some routine housework and listened to the TV besides reading the latest van Gogh biography most of the week.

This latest, (Naifeh and Smith,) is interesting, and new, in that it puts the idiosyncrasy that is Vincent van Gogh the man squarely on Vincent. Presumably authors who undertake to write Vincent books like him or at least admire his paintings, which result in many putting the onus of his difficulties with the world, at least in part, on mental illness, his family history thereof, his mother's detachment especially in the aftermath of the stillbirth of the first Vincent who was born exactly a year before "our" Vincent, the lack of understanding by those who could have helped him, or the expected behavior of his class/time.

This book places the responsibility on him, at least it doesn't let him off the hook due to any of these "reasons". It cites the extreme class consciousness of the Dutch of mid/late 19C, and his family, especially his mother's, eagerness to keep up with the Joneses. But even for his times, even to Theo, Vincent was old-fashioned in his love of sentimentality and the idea the best-of-times has passed; at least during his second The Hague period, he turned away from Theo's repeated invitation to look into Impressionism; that he did not think what was happening in Paris was not one of the most exciting in the history of painting, while he doggedly stuck to figure drawing and engraving after the illustrations in English magazines.

It goes further to say Vincent put reality into his own categories to make it easy to interpret other's reactions or to justify his. Visually it came when he read an article by German engraver Horkomer, working in England, claiming there are physical features or types specific to social class and occupation, and attempted to categorize them; Vincent tried to compile a similar catalogue in The Hague, using a small pool of models, changing their costumes and poses. Apparently. (Vincent was a hypocrite in this way; though he claimed the highest form of art depicted real people in real lives, for whatever his difficulties, during this period, he artificially created his "real" depictions inside his studio.)

Likewise he hung on to catch phrases/mottoes as shorthand for his interpretation of the world around him or for his concepts. One of the most famous is "she, and no other" signifying an ideal woman who would being children, balance and an anchor to his, and Theo's, life and pretty much make all bad things go away. I would go as far as saying he used these "copies" to try to shape the world according to his demands/wishes.

I've not yet made a concentrated effort to read all his letters, as the only resource I have is online and I can't read the screen for very long, especially with the wonky glasses. I know authors use whatever convenient passage or phrases they find in his letters to suit the points they want to make. However, I'm cringing at the prospect because he sounds like a really unlikable fellow, many would say despicable, and his vehement/relentless self-justification reminds me of how I viewed my difficulties with my dad. I will have to go there sometime.

Meanwhile, I also read Chapter 2 of the design book one and a half times, and parts of it puzzles me. As with this van Gogh book, I'm faced with a new problem, having to read the same passage several times. Whereas in the past several decades, I read without taking in the meaning, similar to reading out loud; I know how the words are pronounced so I utter them our loud but it's not the same as my understanding what I'm read. Lately, however, I read a passage, a complete sentence/thought, but it doesn't make sense so I go back to find I made up something totally different from what was in print. It feels too similar to some old folks not really listening to what is being said and making things up sub/unconsciously; a little too scary to dwell on.

Meanwhile, (not good form to start two consecutive paragraphs with the same word, but what the hey,) I got so tired of not making all week, so on Friday morning I got out some collage material; after finishing mundane things I didn't have to Friday morning, I finally got on to work.

They are my favorite kind; mental-health/unintentional/anyting-goes collages at various stages of done-ness, postcards and envelopes. I like some outcomes better than others, but I like working on them; I believe they exercise some part of my brain without my knowing which or how. 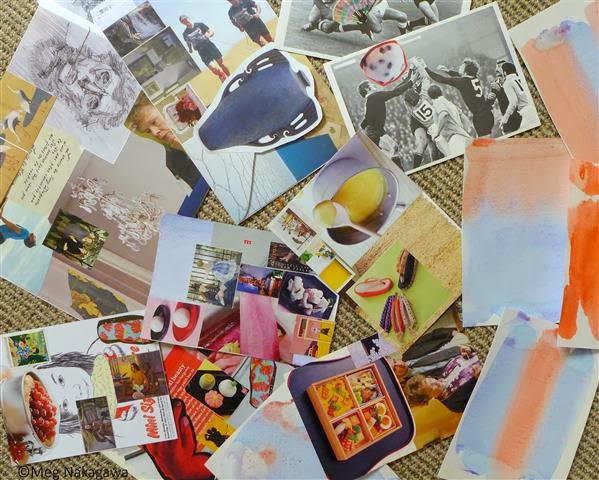