I made two new warps this week. I have used more than I remembered, but there are always around 30 premades. My goal this year is to reduce this number to about 10 at any time. (For one thing their usual spot gets afternoon sun, and even with an old bed sheet over them, it's not ideal as long-term storage. But I'm not adamant, because making warp is one of the most therapeutic activities in my life. Actually, the most, because physicality, tactility, colors, and the subconscious planning running like a film in my head take me to a happy boisterous place. As opposed to the happy quiet place while I thread.

On Friday, I asked art teacher Mark what I thought was a dumb question: in order to create abstract "art", does one have to start with something figurative and abstract/distort it to "reach" an abstracted stage, or can one start with shapes and colors and proceed directly, and his answer, to the first part before I got to the second, was, "Hell, no."

Re Raw/Syrie, I'd been planning on weaving strips 40-50cm wide, because they are easier/quicker to weave than the almost-60cm I'm weaving right now. I visualize four or five of them making up the one leek, and intuition says they are, on average, to be between 4 to 5m long. That's a whopping 20-25m of weaving, when the maximum length on my horizontal mill is somewhere between 21-24m, loom waste and all.

Let's say 40cm-wide times four pieces yield 160cm circumference at the bottom of the leek, (realistically, this minus shrinkage and seams,) about 50cm in diameter. If I weave 60cm-wide, three pieces yield 180cm/57cm; slower weaving per vertical cm, but a lot less in total length, right?

I've also come up with an easy twill solution if I can't get my head around tied or freeform weave structures, if I run out of time, for the windows. I haven't given up on tied weave because I want the cloth to be stiff rather than drape-y, but now I have a fallback plan. Which, hee hee, makes me feel so professional/experienced. (Laugh in union, good people!)

In response to my doubts about "Syrie", (I have to come up with a better working title because it sounds too close to "Siri",) Ruby commented on Facebook: "2 thoughts for you: 1)Working in series is being an artist. 2)Fear of success is real (and very different than fear of failure). Just do it and try to enjoy the fact that you love weaving and engaging with yarn and color."

I never saw "Pillars" as a start of the series. The fact "Syrie" is similar, I saw as only a restriction of and reflection on the technique of conventional loom weaving, and my unwillingness to cut or otherwise distort/enhance the rectangles coming off the looms. As well, I have always been enamoured by architecture and archeology, and in big parts by the simple beauty and regularity of tall pillars in ancient civilizations, European and American Colonial architectures, including, ummmm, plantation/slave-owners' homes, but also public institutions. Also anything square and symmetrical of all sizes. So, in a way, it stands to reason whenever I want to make something that's conceptual on my looms, my defaults are regular-looking pillars and buildings and such. (I've also long had this idea of weaving a city gate.)  And this is fine by me, this being my thing, a series, but if it is, I hope I make more than just the two.

"Fear of success" I don't understand. I find the process of conception to plan to making to hanging, (i.e. the bringing to life the mental picture using the stuff I made), and all on a tight schedule, all-consuming I don't have any brain juice left. Ergo, when I'm working, I'm unencumbered by the fear of failure. Success, especially in relation to exhibitions, have meant having gotten stuff done in respectable time. You remember I have submitted stuff late with the organizer's permission, or proposals with damp pages; I even went back after a show opened to give my stuff one last good steam press, all recorded.

My fear of failure is the fear of embarrassment of not having executed something well, to my satisfaction and if related to an exhibition, to my own perception of standards which may make my stuff submittable beyond Nelson's art/NZ's textile worlds, which are, let's face it, tiny; and misc guilt/regrets always present in my life. And/or ego/pride.

Suffice it to say my fear of failure thus far focused on technique. Syrie presented my first doubt whether my "process" is "deep enough", and I'm mildly amused. It could be a sign of creative maturity, not as in "I've grown up," but more "I've done this a few times, so is the same-old good enough?" Or it's just a bunch of gobbledygook.

Happily I'm stuck in the old energized frenzy for now, and any reflection has to wait until after the deadlines. 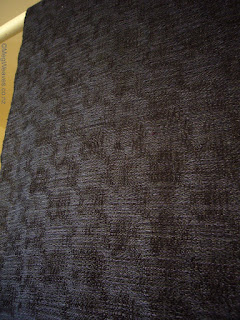 Better view of the first piece off. 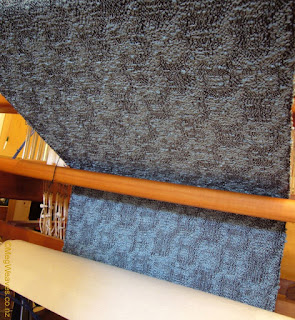 View of the second piece, which ended up being, the notebook says, 2m, but I think it's less. Either way, it's a respectable size, with possibly very-long-for-me fringes. The vertical portion shows the colors pretty accurately on my screen. 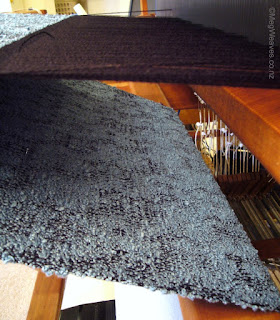 I like the B-side better, but I don't know where that unsightly arc came from. 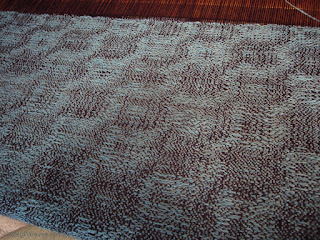 Warp end fabric. This weft is more light teal, whereas the silk above is a slightly-green pale blue.

Here's a lesson from a reckless weaver. This warp is my standard "10m", though I  know that's not the exact length on the board. I wove two biggish samples, one long piece, and another average piece with long fringes, so experience told me I haven't got enough warp left for a third proper piece. I chose this light teal possum/merino/silk to weave a warp-end fabric, possibly for a friend who loves teal and knows how to sew. Well, it turns out I had more weft yarns than I imagined, but not enough for a proper piece and I may have had enough warp for a proper piece. So I'll get 92cm, 1m at best, of this, and a smaller one probably in another green. Silly/stupid/reckless, but a great exercise in using up odds and ends; works well enough if you have to work through a stash as big as mine.

And I'm not sick of this draft yet.