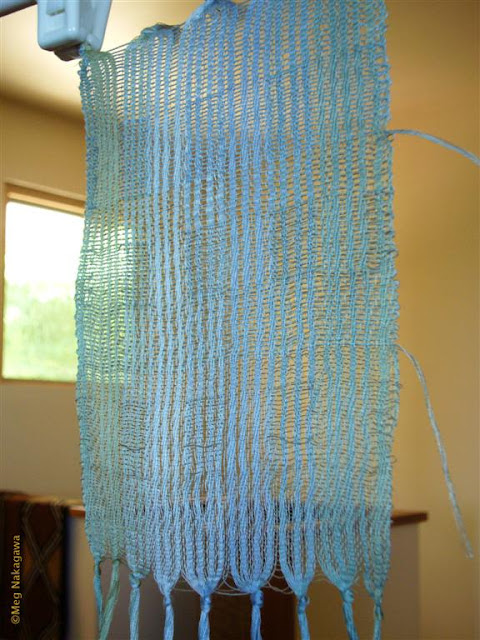 Future plans notwithstanding, this is what I've been working on. It has four colors of the 2/60 cotton in the warp, and I guess-timated the sett should be somewhere between 60-90EPI. I wound the thread around two inches of cardboard, but I couldn't see what I was doing, and had a terrible time counting the threads, so I took a stab in the dark and sleyed it at 60DPI to start at the loose side.

What I wasn't expecting was the stripe effect, as a result of putting 10 ends to a dent in a 6-dent reed. I need to sley more closely to get the cloth I want, but because I only have 292 ends in this warp, I've begun to weave a few scarves in stripe, and then resley to sample closer setts, rather than to get it right only to weave wide-tie-width scarves. The first is in 1/3 and 3/1 two-faced twill stripe, (in addition to the gap-stripe).

The cotton has a beautiful sheen, and is sufficiently stiff but doesn't feel wiry. I broke two warps and the worst part was I couldn't hear them break. I need to weave during the day, so I can see the warp better to avoid skips and other errors. Sample shown here is a little less than 5 inches wide on the loom.

As you can imagine, it weaves terribly slowly, not only because it's fine but also because I put this warp on the Klik table loom so I can scrutinize the yarns and the process, so I don't think I'll get around to weaving a couple of dozen tiny scarves in three-and-a-bit more weeks. Which means I'll have to get a few more cones of the 2/20 cottons for Twilight Market. Grin!!
Posted by Meg at 11/25/2007 11:24:00 AM