Last night was the last meeting of Marlborough Weavers for 2007. We had wine, followed by pot luck dinner, then made Christmas ornaments based on Dutch Teabag folding, then my favorite part, the show-and-tell. This is where we were supposed to show our M's & O's projects, but I'm happy to report, about 1/3 of the projects, like mine, were not M's & O's; there were at least three weavers who wove Davison drafts I worked out on graph paper, and it wonderful to see them come to life. Then we had pot luck desserts and a meeting to give us things to ponder regarding next year's activities. 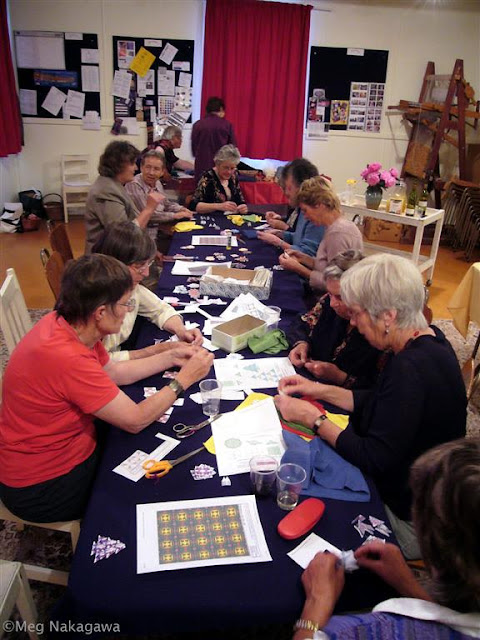 That's us doing a bit of origami, which brought mixed memories of my childhood being told off for not having the corners right, but amongst friends it was pleasant. The tiny purple Christmas tree on the lower left is mine.

Starting with the fabulous picnic in January, a few days before my exhibit opened, I went to a grand total of four meetings this year, which was more than I had hoped for, but still not enough. Nevertheless, I'm glad I belong to this group, and promise A) I will do the annual project next year, whatever that will be, and B) try to get more involved when I can. 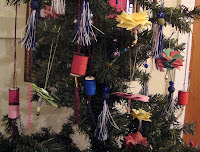 The rosettes were made with the same technique. I was particularly enamored by the tiny spool ornaments made of the spools in sawing kits from the $2 shop; another great idea by Rose.