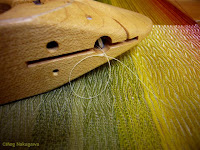 I finally started weaving the last of the fine cotton scarves today. This draft, though similar to the other two, is the most irregular and probably (hopefully?) the most dramatic. Too bad just when I think I'm starting to understand the relationship between the color and shape movements, I'm almost done, but truth to tell I'm so ready to weave something else.

There is something meditative about weaving something as a present to a friend though, not birthday, not any special day, but just because. (OK, I've been dropping hints I'd love one of hers, too, but regardless...) And though I don't fancy getting back into 160EPI any time soon, the hand is seriously growing on me, and I've been making a mental list of things I wouldn't mind trying; the first is shadow/corkscrew weaves, another is varying the sleying slightly within the cloth so the structure/draft is distorted, including the possibility of intentionally scalloped selvedge. And of course there is the overdyeing. I've had a few other fleeting ideas while weaving, but I forgot what they were.

But I can't wait to get on with my SSVE, the idea for which is becoming more and concrete in my head. You?? 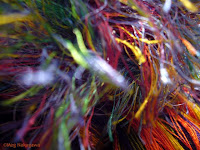