I was Never In a Box

I love making a warp, but while I am doing so I am thinking of future projects.

I don't mind winding on a warp, but I have to concentrate on the task, so I try not to be distracted by the fabulous photos in the magazines used as weight on the chain.

I love threading, but while I am doing so my mind wanders, to my childhood, to places I've traveled, to pictures from your blogs and magazines and books, to what pieces from this warp would look like on people I know and don't know.

I don't mind weaving, but after the sampling, I'm drafting future projects in my head and I am in a rush to see this warp finished. I play nice music and let my mind wander again, but then short story ideas keep popping in my mind, and I have to top and make notes.

And when I finish weaving, I can't wait to see them wet-finished, and the next warp dressed on the loom.

The longest and the most trying part the weaving.

And if the warp in question is fussy knitting alpaca, I am even more impatient.

The bad news is, my camera is in the camera hospital, somewhere further south on our South Island. I discovered a wee black spot on lower left of the screen when I was at world heritage Himeji-jo Castle known for its white walls, which totally drained my pic-mojo henceforth. I took it to a camera shop that evening, where staff had a look and a bit of a clean and said it's inside the plastic cage, on the sensor or some such, and had to be sent away. I didn't have time for that in Japan, so I went to our trusty local shop yesterday and she gave the same diagnosis. This is the first time since August 2006 that I am without my tiny camera, and it's funny how I keep running into things I want to photograph when I don't have it with me. 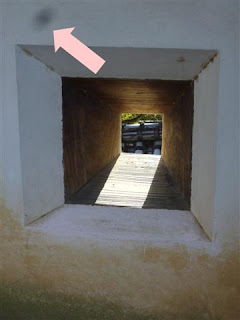 Good news. I resumed my figure/life drawing class yesterday. Term I was halfway finished, but Ronette let me rejoin, and I had a really good session, regardless of the 2+ months away from drawing.

There I ran into Felicity Mountfort, a lovely art student I keep running into at different textile events. More on her work in the next post.

Felicity mentioned an India Flint workshop/retreat happening in the not-so-far future in Nelson. I know Jo Kinross ran a workshop last year, but back then I was so not interested in a dyeing workshop, though I hoped to get into it some day. After seeing Felicity's work and India's photos, I'm curious.

Clare Plug is coming to Nelson to run a collage workshop in March and I managed to squeeze in. I did my best to go to her weekend workshop in Napier last year but couldn't so I'm doubly glad.

* * * * *
We had a fish-and-chips dinner by the water last night with JB and Mrs JB. JB is a Kiwi who has lived in German half of his life after meeting Mrs JB. We discussed traditions and different ways of learning a craft, the German traveling carpenters and French traveling craftsmen, and apprenticeships in Japan. I talked about life in Japan and in Nelson, and said, again, I would never have become a weaver had I not lived in Nelson, or perhaps New Zealand.

I enjoy the absence of restraints/constraints from traditions here and I appreciate this. That is not to say you cannot practice individual creativity in Japan, but given my penchant for learning from books and people and following orders/instructions, I would have relied on precedents had I learned to weave in Japan. That is, if I even had the space for a loom.

I even started to enjoy the lack of immediate resources in Nelson; I make the effort to seek out and cultivate good material, workshops, mentors and friends, which is not always necessary in Japan, and I know these relationship feed me and my creativity.

JB said the way I reached where I am now is not that I am now outside the box, but that I was never in one. He said he'll copyright this description, but I can use it.