There is a bug going around; I saw notices all over the Polytech to wash hands and stay home if sick.  I've had a weak one two weeks ago, and I had it again this week, but I'm kind of glad I soldiered on.

I did go see "McLuhan's Wake" Thursday night. I didn't like how the film was edited/organized; too much going on at once, sound clips overlapping, persons speaking not identified, it was less a "mediation" on his ideas, but an over-caffeinated episode of Sesame Street for grownups; I may have caught 5% of his ideas.  I feel the problem comes from two areas: that I wasn't around when McLuhan was a media celeb, (I had no idea who the man who dropped by in Annie Hall was but always empathized with Woody Allen's sentiment,) and the filmmakers tried to put in practice McLuhan's most famous aphorism, the medium is the message.  A more straight-forward doco would have been easier in understanding what McLuhan said, but still I'm glad I went.  The doco was made in 2002, the same year Prof Mitsui's book I'm reading was published. At this point, I don't intend to read McLuhan, but go back to the start of Prof Mitsui's book; I'm also tempted to look for an audio book of "Finnegan's Wake".

Some links:
McLuhan.com
Interview with the writer David Sobelman, (in which he explains the format of the doco,) on an Universita di Bologna-based (?) site dedicated to McLuhan.  (English version on the right tool bar.)
University of Toronto counterpart.
Referenced "Wired" magazine article.
McLuhan on YouTube

Although invisible to the naked eye, I have been making dents into my stash, this week in to the cashmere drawers.  Still, I have started to have misgivings about whether I will be able to use up all my yarns before I, you know, go.  And whether there will come a time when what I have on hand will determine the directions I take, which is the first thing we were told not to do in the correspondence design course with Alison, back in 2002.

I've also been thinking I might have to think about the size of one's ambition vs accomplishment.  This thought popped up after Tuesday's exhibition hanging.  At first, I need to revisit what exactly my ambitions are re. weaving.

Friday I returned to Ronette's figure drawing class.  I keep saying I did three years of it before I took a term off, but later in the afternoon I heard myself tell someone I just "started my fourth year" which sounded alarming, as if I was supposed to know what I was doing.  The class itself was fine, though I often forget what gesture drawing is unless I keep practicing, that we are supposed to draw quickly and not necessarily contours.  While discussing composition, suddenly I became super aware of who among us thinks about composition and other visual-artistic concerns all the time, vs who makes a weekly appearance at a pleasant drawing class.  Suddenly the world looked clearer and more vivid, and though my opinion was so different from others regarding eye-catching compositions, (I really went for the Ukiyoe-style yesterday,) I was confident in my opinion and if asked I knew I could explain why.  A novel experience. 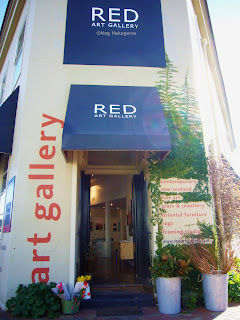 Ben and I went to see reopened Red Gallery.  They have some of Lloyd's paintings now and I saw a few pictures of the café earlier in the week so I was curious.  Truth to tell, I was ready to hate it because of my loyalty to Jay.  Well, the place looked updated, contemporary, probably targeting a more general, and possibly younger, market, more "a café/gift shop with art", but very fresh.  And I like the new owners.  And if you know Nelson, Derek with the red socks, ex Lambretta, ex Zumo, now swerves coffee there.

So all in all, I had a good day.  Even my dentist appointment was short and they gave me the July issue of National Geographic because I couldn't finish the Cleopatra article.  I got loads of errands done, including canceling a "business" debit card I only used twice in the first six months.

Then I came home to discover a big withdraw from my account, which the call center people identified as a check/cheque withdrawal from a neighboring branch.  Except the last time I wrote a check was in April, for a different amount, cashed three days after I wrote it.  And I haven't written one for the amount withdrawn in the last few years, there is "no record" of its number available online, and I was recommended to ring that branch on Monday.  Huh?  The teller who helped me was typing for an uncomfortably long time and the card cancellation took extraordinary long for the nature of the transaction.  But then it could be entirely me forgetting something.  I'm going to battle it out at the bank on Monday, in person.

Can't with them all.

In the wee, wee hours, I had to resort to TV, and caught the first (half??) of "In Search of Mozart".  I believe I saw it in a theater when it came out, but I couldn't remember, and not much of what I saw rang any bell.  One pays less attention to details, I think, when watching something like this between late night and early morning.  I was overwhelmed by his dad's money worries on this occasion.
Posted by Meg at 8/06/2011 12:52:00 PM