I've been thinking about machines, and what I've come to see as mechanical weaving.

I'm pretty sure sure humans made machines so we can do things faster and easier. With machines we can make more things in a given time, or need fewer trips to transport material or output, or recreate more or less the same output without repeating the entire series of steps for each one of the output. I'm a firm believer, (you tend to be if you do any time in IT,) machines and output are only as good as how they are made and used; humans who make and use them must know what they're doing. Skills needed to use machines aren't necessarily simpler than, but are certainly different from, doing the same task without machines.

Ben, being an amateur digital and film still photographer, ponders automagical vs manual photography often. I enjoy the discourse, but in the first instance, I disagree with him; in weaving bigger and badder machines surely enables one to get away with learning less, and/or produce outcome disproportionately favorable to the maker's knowledge/skills. And yet I have experienced instanced where - what's the word? - "artistry"? added to or exceeded works of superior technique/competence.

The two last drafts I've been weaving annoy me. If you have a weaving software, the kind of networked twill drafts, and may other, can be created eye-wateringly quickly. The way I work, the only time-consuming, or personally involved, bits are correcting long floats, (my software finds them for me,) and the threading of the loom. Unless I'm after a specific size/shape/expression, designing on the computer can be soulless. As for weaving on the computer controlled-loom, you feed the draft into the loom, (my retrofit setup is a tiny bit more complicated but not by much,) and weave. I press the one air-compressor pedal for each pick, and I throw/catch the shuttle with my hands.

I used to be not displeased with my detachment from my weaving; I thought it was a cool, calm approach I haven't been able to establish in other areas of my life. The stuff coming off my loom are still what I make, and never who I am. On occasion I worried about the disdain I feel towards my finished pieces, but I saw it as a kind of maturity/objectivity as a weaver, and if the right piece came along, I was confident I could gush like no other.

There is nothing wrong with the mechanical weaving if I were into geometric/mathematical problem solving, but it appears I now want a little more ..."involvement". I don't know what I mean, or whether I'll know when I'm doing it, and at this point I hesitate to call it the catch-all "human factor". I don't know where the paradigm shift came from; if it this the next step of maturing, did it come form soaking up Randy from his video, or from the goings-on with Group R? Or did you put a spell on me? Or did I always have it, and that's why I haven't learned most functions on Fiberworks after 10 years, and still do some things manually when a click of a button can save me hours, days and weeks? (And a double weave blanket with two faces on both sides?!)

Way back, when Connie was a weaver, she had a rod/bar (third pic; in front of her work table) on which she hung scarves; they stayed there until Connie was satisfied each piece was truly finished. I envied her level of involvement, and I'm still more a quality control inspector at the end of the process, but I find myself rebelling against quick-and-dirty weaving. 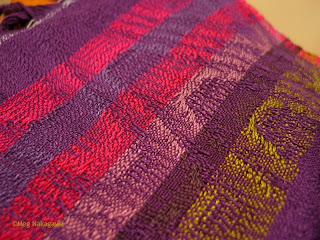 Not all is lost. In contrast to my usual flat cloth, I like the textures emerging in these two, the different expressions created with long vs short floats in different directions, mixed with plain weave bits. On the loom, they feel rough, and that's something I've never had on any loom of mine.
Posted by Meg at 6/02/2012 03:42:00 PM