First Time for Everything

I would have never guessed, but I have a title for tentatively-Mom's-hangy-piece, and it's in Japanese, ｢天・地・人｣. Whowudathunkit! "Ten, Chi, Jin", or something like "Heaven/sky, Earth/soil, People".

There are gazillion schools, (as in "sects",) of floral arrangement in Japan. Some focus on the "Shin, Soe, Tai" or the main, sub and tertiary, in different proportions; others are more vague and call them "Ten, Chi, Jin." When I looked for the right style for me and tried seven different schools, a couple of them used this more stylish maxim, but I can't remember what they mean now. We must have talked about this while I was home, but I can't remember that, either.

Anyhoo, I'm building this bottom up, so I wove three browns for the Earth/soil. Tomorrow it's People in three yellows. The position and proportion of the colors aren't as symbolic as what looks pretty. It's the Sky I'm not sure about; I don't like the very strong blue; I want to soften it by using greens, especially the softer green, (trees?) and though I don't like the peach-pink, that one packs a punch and would make the difference between a harmonious/boring piece and an interesting one. So.... not sure what I'm doing for now but I'll take it into consideration.  This one has been fast to weave and the width of roughly 35cm is so easy on the body.

I  found wool and wool/silk Mom dyed with marigolds ages ago which would make softer, nicer wefts if I were to weave matching cushion covers, as well as a mohair/wool/silk knitting yarns that looked great but didn't behave. The first two are a paler versions of the mid-brown in the Earth/soil, so either, or a combination, would most definitely match.

Still on Mom: I resolved to send visual inspirations to Mom and her students on a regular basis while I was still home, but had forgotten about it until yesterday. Anyway, this is the first that went out today; it's multiples negatives of Ben's birthday portrait. I myself don't see patterns in my environment much, but I'm calling their attention to repeats. Obviously. 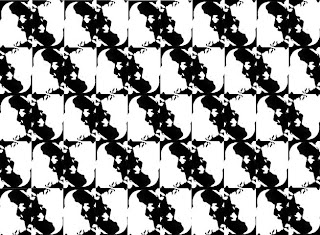 And the small piece exhibition is going ahead. Guidelines are pretty much as were set out in the Proposal. We still need a good name, though; any ideas??
Posted by Meg at 4/14/2013 09:05:00 PM