A little over four weeks ago, in the Thursday evening before I left home, I was angry/disappointed/sad/miserable about my inability to connect with Dad. Some days earlier, he had told Mom and me how frustrated and lonely he felt because he could not communicate with his family. And I felt terrible, because I could/would not try harder to do a good job in my last days there, so much so that I even contemplated waking him up. Around 1AM, all three of us happened to have to go to the loo at the same time, and I was open to us having a cuppa, but the oldies went straight back to bed.

To Dad, "communicating" always meant he spoke and we listened respectfully and obeyed unquestioningly. I used to get in serious trouble because I didn't look at him respectfully enough, or because he sensed I was "putting on" an expression, i.e. mocking him. Serious. But there was never communication in the sense of heart-to-heart talks between Dad and, to my knowledge, any of us kids, at least not since we've become adults, not the way Mom and I opine, hash things out, dis/agree and can even agree to disagree.

We don't do "I love you" in Japanese; in fact, there is no straight translation of that verb that can be used in conversations between parent and child, sweethearts, friends, or people and things. The closest I can think of as expressed in my family is to thank them so I told my parents about all the things I appreciated in specific, minute details. They'd long forgotten a lot of what I had to say and we spent many an enjoyable hours. We also talked about the time three of us were in the US, funny things that happened to our family or people we know or funny things folks said, and of my parents' extensive travels. I asked a lot about Dad's childhood and youth, even though I knew all the stories by heart. And we sang songs out loud together. But that wasn't what Dad wanted; he yearned to be respected and obeyed.

Mom, being his wife and an adult from the start, sees Dad eye to eye. Nowadays different doctors tell him to do this and not do that. We, in turn, try to get him to obey the doctors and maintain a more or less civil life. So he feels he's at the bottom of the heap. Increasing number of household or mundane decisions are made without him being consulted or us reporting to him, not that there was any mildly serious Decisions that required making while I was home, but he is suspicious and paranoid. Mom understands he feels there is no place left for Dad, somewhere he can be the Big Boss and give out orders. But she refuses to be his slave and perhaps this is how she maintains the sanest relationship with him. We kids feel exhausted from having Dad telling us what's what all our lives, and react in different ways, from being polite without necessarily meaning it, avoiding one-to-one contact with him, to telling him what's really what right back at him. I'm probably most terrified of him, and yet I seem to feel most indebted to him. Such horrible children we are.

For a couple of days after I came home, I could not stop bawling my eyes out regretting what a closed, small-minded person I had become, and I blamed Dad, all that Dad preached or what I believe he taught me, Mom and Dad, psychotherapy, and even the therapeutic effects of blogging. But the fact is, I could/would not change my ways to appease him as I can't like and call spade a spade, and I'm still afraid of Dad finding me out if I feign interest/respect. Or him not being in the mood to "communicate" as approaching him when he is not in the mood is yet another Big No No. Still, I have only myself to blame.Who happens to be the only person I can change.

For a while I've also started to feel slightly unsure of who I am because I was a 54-year-old only-child for over seven weeks, I knew about weaving but wasn't able to work, and I only spoke to Ben on Skype for a short time at nights, and we don't have meaningful talks on Skype. I knew I was all of these people at once, but I felt as if I was not committed to being any of these enough. That's why I wanted to land back on earth and on the loom bench. Pronto.

Life in Nelson is back to normal: I weave, cook some, read some, the house is messy, the garden is way overgrown, but Ben and I laugh a lot together. And I continue to plan short- and long-term ways to bring some kind of an order into our life.

Things back home are not great: Dad has been in a hospital for two weeks and may have to move to another, possibly soon. Mom and Sister update me on which body part is misbehaving on a particular day/week, but we see Dad's body more like a sieve, and when one doctor patches up one part, another part starts to leak with gusto. Dad has no will to do anything to help himself, is constantly and extremely angry. it's likely that when Dad goes home from whichever hospital, whenever, his becoming bed-ridden is eminent. Mom cannot care for Dad around the clock on her own then, so we would have to look for a care facility for Dad, or secure more help to assist Mom. Sis says the former is more likely, in which case we have to convince Dad, move him, sell the house, and resettle Mom.

All in all I think I'll be going back home sooner than the northern Fall/Winter I had expected. 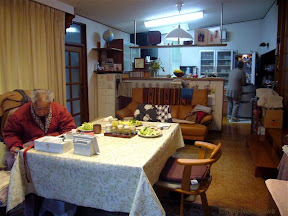 The Wednesday I left, I put aside four hours so we could maybe sit and watch the high school baseball together, but Dad wanted to read the paper, Mom wouldn't stop housework, then cooked a yummy lunch. So I took pictures. 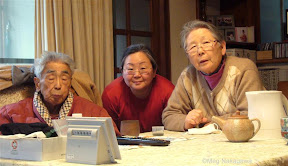 More pictures than Dad cared to be in. 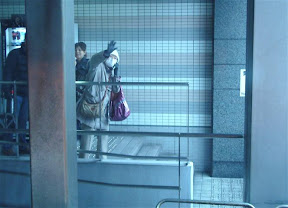 Mom came to see me off at the airport bus terminal near Yokohama Station. I don't know if she rang Dad, or Dad her, but she was on the phone before I even had a seat on the bus.