It's been two weeks since I left Japan. First week back I was tired, and the second, not so tired but unmotivated and unable to get back into the NZ time zone. Then, daylight savings ended on the weekend and things have started to look up. I'm thankful to that because the plan was to get back into the swing of things work-wise as soon as I got back, as I had been uncharacteristically swinging before I left.

For about ten weeks now, either or both of my middle finger nails have been peeling/cracking/splintering and breaking; I can't tell you how this started, but you know when they are splitting and thin they so easily get caught in clothes, yarns and other unexpected material? I had plasters on both nails for a while until the skin on my right middle finger became red, itchy and oversensitive to heat, so I took them off. Big mistake; just when I thought they were both coming right, my right one broke again big time. Ouch! So I have another plaster. This is my legitimate excuse why I haven't been working as much as I had planned, which I suspect only other weavers would knot to be legitimate. And I try not to dwell on the significance of the choice of fingers; LOL.

Towards the end of my stay in Japan, there were two drafts I wanted to reuse, with or without editing. One was the networked twill I made for Mom, though the success of this one lies not only on the draft but the combination and proportion of the colors, and the season and colors right outside our windows as we worked. And because we were having a jolly good time working together. I was going to do something with it until Mom told me she'd like to weave something similar again but wider. So I've put this one on hold; when she decides on her sett and width I'll make another draft and we'll weave it simultaneously. Or close to it.

The other draft is from a series I worked on in late 2008, and in particular, the top right one in the fourth pic  here. It's fine enough but not fussy or blurry and for now I prefer it to any of the options in the fifth pic.

I've also I wanted to practice weaving with silk, and slinky flat silk in particular, so I thought to combine silk with said draft and took out some cones Pat had inherited from Nola but were given to me last year. Lovely colors. So the tops of the cones are a bit bleached, but good enough for practice, right? Wrong! 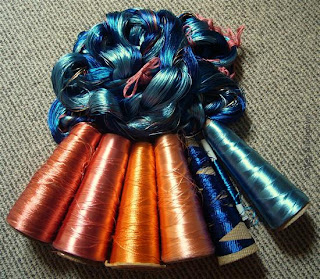 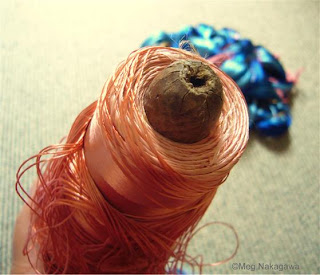 When silk is left out too long, they not only bleach but deteriorate pretty badly. I don't know if you can tell but they kept breaking while I made the warp so this is going to be really only practice, i.e. I'd better not even expect tiny pieces of nice bits lest I'd be disheartened. Eight meters of practice. Yikes. Maybe a bit later, then? 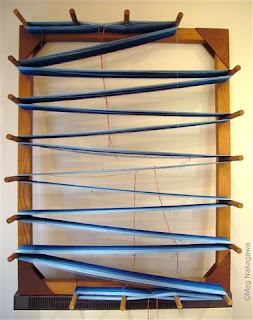 Yesterday I just wanted to weave, so I finished my purple piece. I found a threading mistake halfway through, and the selvedge is pretty horrible, but there is a sense of OK-ness, if not of achievement, just to weave and get a warp off the loom. And the piece is heavy, so when we sit on the couch and put this on our laps, I hope it'll feel like a large dog leaning, or even sitting, on us. I have some yarns leftover, so I'm going to add one more yarn (bottom two balls) to weave two leftover-yarn cushion covers. Mom and I had so much fun with her red leftover project, and though she said I could take one, (and I knew which one I wanted,) I didn't have the heart to separate the two. So I'll have my own pair. Mine won't have the variety of yarns that went into hers so it'll be more somber but they are purple, so need I say more? 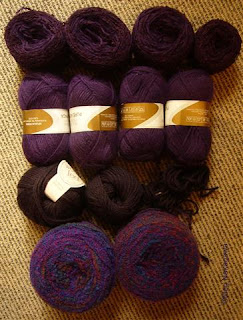 With the probable small piece exhibition in mind, I wanted to revisit Summer & Winter because I've had one picture on my mind for a while and it can be done in S&W. It just so happens that I've had a S&W warp on a table loom since I got excited about S&W. A. While. Ago. So, on to it. But wait, where are all my recycled paper bobbins? Sure, there are some with this project, and oh, I used a bit on that project but will need them soon. And oh, I did use them to wind leftovers from that other project. So, what, none left? I have to make some or buy drinking straws? Grrrr... I want to weave.