We saw the tutorial. We saw her collection. We saw what you all made. I even had a personal tutorial. And this is why I'm the slowest weaver; it's been five years since her post, but I made one, today. 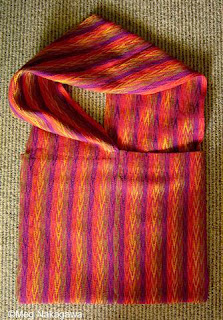 And by popular vote, the lining is the kiwi fabric!! 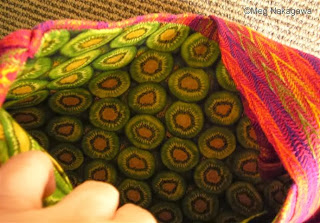 It took me a while to get my head around the construction, so I made a paper mock up. Then I saw the most difficult issue was the proportions: width vs. height, the height of the bag vs of the handle. I could only weave 25-40cm of 2/20 cottons a day, so I made the mockup roughly the same width as the fabric and played with the proportion and concluded I needed 1.8m so I wove 1.84m. 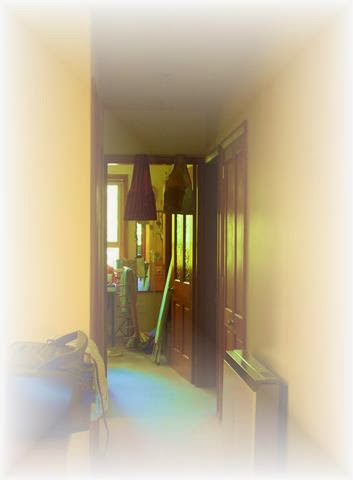 This is what I saw for a few days at the end of the hallway as I modified the proportion of the cloth version. From the start I wanted a shorter, stubbier version, but with a handle I could still sling over my shoulder. The mockup was perfect, but with the onerous cotton weaving, I also wanted to show the maximum length of the fabric, which came out mysteriously and considerably longer than the mockup. I really need to relearn how to use a tape measure.

I've never learned how to line things properly and I only understand the logic but not the practice, so it was always going to be a long shot getting the lining right. Because the handwoven fabric has a lot of gaps, I put the fusible interfacing on the back of the Kiwi fabric. The lining, (Kiwi & fusible,) was so out of shape and much too hard in contrast to the woven fabric, attaching it distorted the shape of the woven bag. I think I'll disengage the lining and stitch it on once more tonight, and if that doesn't fix the distortion, I shall make another lining, (in the reindeer,) without the fusible interfacing and stitch it on.

I had been concocting a cunning plan to make simple bags out of my warp end fabrics, but I feel so unconfortable about sewing this plan is most definitely shelved for now. But I'm becoming quite the Bag Lady this year.

I really did not enjoy class on Friday. The model came 25 minutes late, and Ronette seemed distracted,; those kind of things really annoy me. And I annoyed Ronette in return because I work messily, and use too much ink. But I wash my hands instead of wearing gloves, because the combination of cornstarch and latex globes make my hands feel very strange. 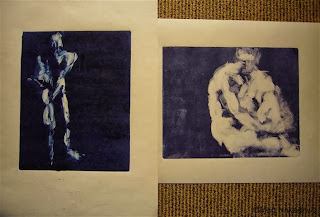 The intention of the left piece was to print another image so I could print another figure on the right, but I should have used a lighter ink or drew with pale-colord ink for the second image and I was too annoyed to think calmly. But Ben and I like this kind of composition. The piece on the right, I employed former-classmate Margaret's methods: when all else fails, use the wrong hand. That's the only piece I really like from yesterday.