No Pre-Christmas Rush for B&M

It's almost Christmas, is it? Well, at the relaxed Chez Nakagawa in super laid-back Nelson in casual New Zealand, we are outdoing ourselves in not doing anything much special. For example, berry picking is an iron-clad must any other year, but in the interest of avoiding crowd and stress this year, we are going a little after the Christmas rush. But fret not; we went to the fish monger, the supermarket, and the Italian specialty store and stocked up on treats. 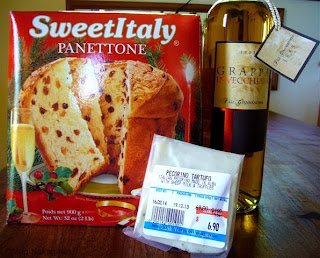 We have a wee slice of panettone with coffee every morning at least until Epiphany Day; one is never enough but we took the small car so we shall return to the store after Christmas. Ben likes caffè corretto, (always with grappa,) so we got this aged bottle. And a first for both of us, pecorino with truffles to go into scrambled eggs or omelets to be made by Ben.

So, not not-special, but a little different from our usual berries-bubbles-and-cookbooks-in-bed. Oh, we have bubbles, and we have one new cookbook this season, but a few I got earlier in the year, and a couple of gardening books I want to get stuck into. (Yeah, ha ha ha, I really should get stuck into dirt, right?) 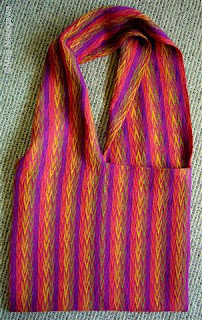 I took off the lining right after I posted a week-plus ago, and rested both cloths overnight. Then I pressed them to "correct" the shapes and sewed them together again. Though the lining is still warped, the bag as a whole isn't, more or less, and what warping remains is where I turned back (?) and adhered the two ends of the outside fabric on itself.

I've also been reminded how much I love to weave with my 2/20 cottons; these yarns cooperate with me, and as long as I don't do anything silly, they never break. So, more to come next year.

After some twist and turns, three not-Layarya pieces were delivered to the Suter, and before Andrea had a chance to talk to me or put then in the system and price them, someone wanted the bottom green one, and it was sold on the spot as a Christmas present from a husband to wife. I feel grateful.

"Doni's" red warp is almost threaded. Funny story, I pondered for some weeks whether to make it just red and orange all the way, (the two colors are very close in value but slightly different in hue,) or to make it half-and-half with a red and pink combination, (these two are vastly different in values.) In the interest of weaving something interesting to myself I went with the latter. I started threading from the red and pink end, which was a cinch, but the red and orange half has been, er..... a b1+ch; I can't see the difference in hue under halogen or florescent lights and the room is light enough for me to detect the difference for only a few hours a day, so I had to quit Friday night with about 80 to go and haven't managed to go downstairs at the right time of the day. I hope to get this done really soon because I'm dying to sample this warp.

A friend told me she wanted to buy my drawing, (????? !!!) so I went to see if I still had it; while I searched I found this series of quick drawings we did one time; I loved this session and never forgot about it, but I can't remember what the instructions were. Anyway, it appears I used my fingers and ink to capture the essence of different pauses in a jiffy. I want to do something like this again. 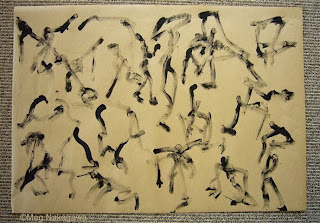 Lovely Brother found an apartment for Mom, in the exact building she wanted, about 7- (Ben and Brother) to 18- (me) minutes walk from his house, and about 40 min from my sister's place. She's never lived in an apartment before so she had quite a list of conditions and I did not think Brother could meet them all, but he held out and came across one that met all her criteria. Boy, she's a lucky woman! She thinks it's too big, but wait until she tries to fit all the looms and the yarns. Though it's almost twice the apartment we had when we first got married, she'll see it's not too big for her. She's moving in Jan, but we have possession of the house until the end of Feb, so she doesn't have to rush the final culling, and Fabulous Sister and Nephew #2 is helping so I don't have to make a quick trip which I was prepared for. (Nephew #1 has university entrance exams in Dec/Jan/Feb.)

I've had crazy-disrupted sleep for several weeks now; some days I can sleep straight for 20 hours and others I'm wide awake for longer. I try to regulate my life by not napping and going to bed at a reasonable hour but it's not working, and I think it'd help if I exercised more but whenever I can I've been tidying the inside of the house. Some days I wondered if I was sick because I just couldn't wake up, but it's more likely the body is making up for the crazy year that was 2013. I'm not too worried. And some nights I even catch fab doco reruns, so no panic.
Posted by Meg at 12/23/2013 06:18:00 PM