Not Dr Gregory, but the structures in which we live.

Family on my mother's side has a thing for houses. Grandpa liked building new homes and moving, though a lot of that was necessitated by the war and his large household; two cousins studied interior design; one uncle is an architect; at different times I wanted to study both I even took two terms of architectural drafting in high school, a great departure from my strictly-academic path; it was my senior year and I knew nobody in class.

I grew up watching Mom plan an extension to our old house, the whole of the "new" house, (the one she left last month,) and several modification to it. I never wanted a mansion,  but something that fit me; sparse, enough storage and a personality. We did well in our first, tiny apartment done up mostly in blueish gray, as minimalist as we could manage but almost totally in my taste.

Over the years I had three friends whose houses in Nelson I seriously envied; all belonged to single female friends, two professional makers, another an avid traveller. None of the houses were out of the ordinary, one was rather modest, and nobody spent a fortune decorating them, but all three had personality of the women who loved them and lived in them. (As a student in the US in the70's, I've also seen some lovely mansions and how money, and TLC, can make them visually pleasing, but as I get older I don't mind so much about luxury, but much more about personality and comfort.)

I tried to study how they did it, but look as I did, I couldn't emulate them. At one point I hung a lot of cloths Mom bought on her travels for me, to the point the house started to look a little like one friend's house, but it still didn't feel like mine. I still haven't found a way to make my house feel like my home, and I don't even have a comfy chair of my own.

Ben has, for a guy dare I say, a lot to say about the house and furniture. No pink, no ribbons, no floral, iffy even about leaf motifs. Ostensibly we agree on everything; we talk it out and go with what makes sense to us both. Sometimes his choices make such good sense I can still point them out years later. But Ben is no minimalist, and as you know I've accumulated a lot of stuff, and after 17 years and 17 days at #44, even though I've lived here longer, by far, than any place before, I'm still waiting this to feel like home.

Earlier on I tried keeping this place super duper clean at all times to appeal to that fanatic side of me. Then I tried leaving stuff out. Ben has never been a tidy person, so after 10 years with him, five years in this house, it was easier to not fight him on this, and it did relieve me of angst. Then I become a certified acutely-anxious/depressed person and started to stock stuff, mostly household cleaning products, soups, shampoos moisturizers, and books and yarns. And I started this "minimum cleaning" regime.

I got over the worst of the depressed episodes around three years ago, and I started cleaning again, but never with as much gusto as I used to, or as often. Other than books, art supplies, and yarns, I don't overstock anything any more; Ben hoards cameras and lenses but they're not so out of proportion. The alterations and new stuff we bought started to look a little old some years ago, and we are older and lazier, so the house is never as clean or tidy as I like. Some days I feel frustrated but on occasion I feel downright angry. I don't feel comfortable in this place.

The problem is not so much the difference in our tastes, though I had to learn to live with greens after I saw how they suits Nelson's light. Do I give in to his wishes too much? Do I indulge him? Yes, I think so, though not always. But the real problem maybe my two different preferences: an absolute minimalist on one hand, (oh, to live in a polished concrete box! To live in an art-gallery-in-between-exhibitions!!) and the cottage-y, floral chintz, frills and nooks, my own witch's cubbyhole. Anything but this in-between, no style, no personality, always-temporary mess. (And an average house built in the early 1960's hardly does do much on its own.)

I think my design/stash room was supposed to be that, my escape place, and it's my own fault it's not. But I've felt so indecisive, so overburdened and so helpless, I've felt devoid ideas for several years. Except to hurry and use my stash.

I'm not grumpy. Or depressed. Just a little removed from myself and my own life due to the wonky vision due to the broken eyeglasses; it's coming up four weeks now.

It wasn't in an effort to remedy my house turmoil so much but to not do nothing over long weekends that we moved some pictures, put up some new ones, and finally, finally, installed Ben's picture rail after years of deliberation, in the last few days. 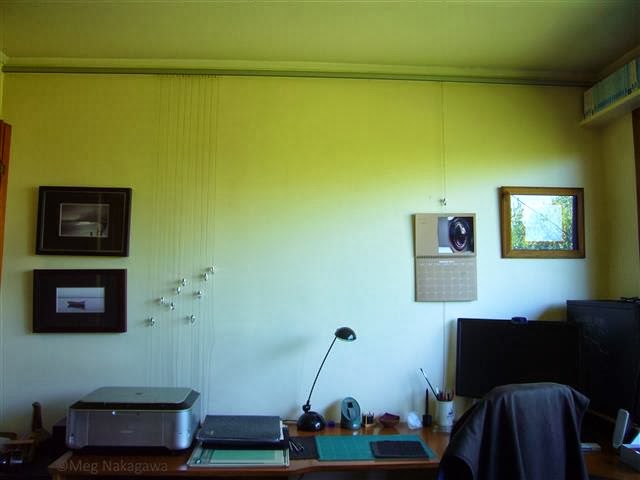 He's still working out the balance, the weight, and the types of photos he wants to hang this week/month/season. 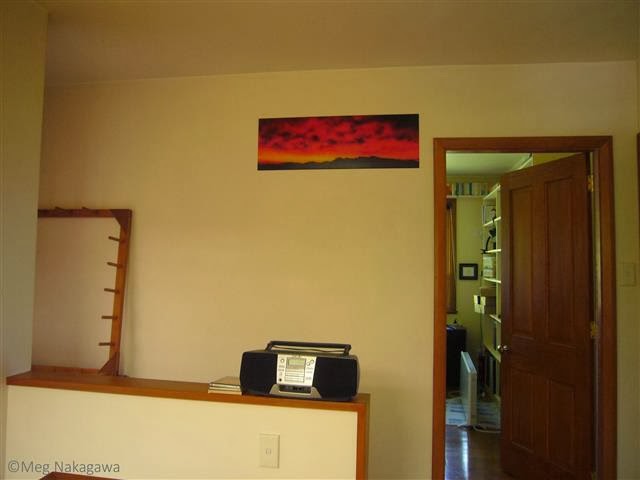 This is one of the two rather large Plexiglas (30cm x 90cm, or roughly 1' x 3;) on which Ben had his photographs printed. The other is of a blue/purple/pink sunset over the sea, placed inside the study, but this one has very strong oranges and dark grays and we did not know where to place it. In fact, we did not realize we had no strong colors on our walls until this weekend. I figured it would have to be on a big wall, and somewhere we can stand back, so I chose here. This will be the first thing you will see when you walk into the house from the front door, or come from downstairs through the garage and the studio. I can even see it in the corner of my eye making a cup of tea in the kitchen.

Normally I would have gone nuts unless we washed the walls on which new things were to go up first, but it was too hot and humid this weekend so we just wiped the area. Kinda. Which, you know, makes the dirt more visible.