Ben's cable-knit scarf was finished Wednesday night. I let it relax a bit and washed it today, according to the cashmere source's instructions, much the way you would wash/press a knit garment. Even though I ignore her instructions on how to wash woven pieces and do my regular wool process: hot-cold-hot-cold, spin, then hottest steam press with press cloth, the end results look similar.

The sides of the scarf curl back; while I was knitting it it was an almost-tube. Had I known this, I would have made it a tube to begin with because it is faster for me. I'm OK with knitting, but not so with purling (?); I'm super slow and constant redoing the purl part. But if feels great and Ben loves it, tubey or not tu-be. 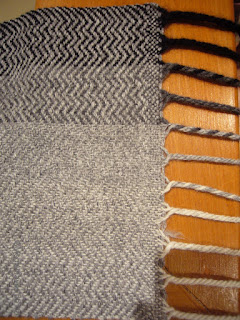 I also finished weaving Esther's yesterday and just washed it. It's a solid, meaty piece, but I haven't been able to make as great fringes as I used to. Come to think of it, I get good fringes with merino and cotton, but I've often had to rework cashmere fringes. I can't imagine twisting it any more as I squeeze maximum number of twists in all my fringes, but this needs investigating. I wonder if something has changed in the way the cashmere yarns are spun.

I thought I'd weave a scarf for my cousin's husband from the same warp because he treats me to the yummiest eateries around Tokyo every time I go home but having looked at his many photos on Facebook, I haven't figured out his favorite colors. There is one powder blue I like and he has one sweater that includes something close to it, but on its own I don't have enough. I might weave something else first, like the black and white clasped weft, while I sit on the decision. 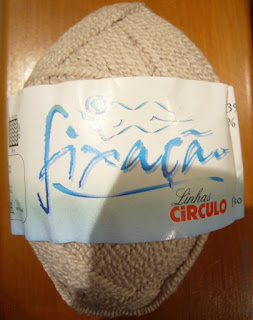 I started a new knitting project last night, too; loose cowls for me and possibly Mom using Brazilian stretchy cotton, but if you think I (don't) keep horrible weaving records, I work out my knitting as I knit, and I wanted to modify something I did before but I couldn't remember, and then I thought I am misremembering. Oh dear. But the bigger problem is this cotton is SO dusty and I can't stop sneezing and scratching, so I might change my mind and do a short, tube cashmere scarf for Mom.

I am so OCD, in the garden I must have a plan for a discernible patch to start weeding. On Tuesday I dithered for so long I exasperated myself, and finally parked myself in the middle of the hellebores and weeded. It's my favorite spot, of course, and it's looked dire but usually to get there I start from the right, at the bottom of the steps and take half a day before I reach the hellebores, or occasionally from the right, which includes the oh-so neglected alstroemeria patch I'll need three (?) days to reach the hellebores without touching the ivy along the retaining wall. Thinking outside the mental cage worked; it was a good two and a half hours. I should have gone out again yesterday but it took me all morning to make seafood chowder and I was desperate to finish Esther's piece. Today it's raining.

Last night when I went to fetch firewood, right outside our front door, I sensed a presence nearby, and it was a fattest, rudest possum! We found poo last spring and lost new shoots from all the blubs in pots, but when a Facebook gardening group told me it was possum poo, I was completely in denial. Well, now I know! Birds, including giant unafraid wekas, cats, dogs, (there once was a roaming bull mastiff!), hedgehogs, rodents, and now a possum in the suburb! Possums are pests in New Zealand, and along with rats and stoats and cats, destroy native flora and fauna; they are detrimental to native birds. We're allowed to catch/kill possums, but the two townies haven't got a clue what to do. (I was supposed to ring the Council if they can help, but forgot and it's 4.45!)